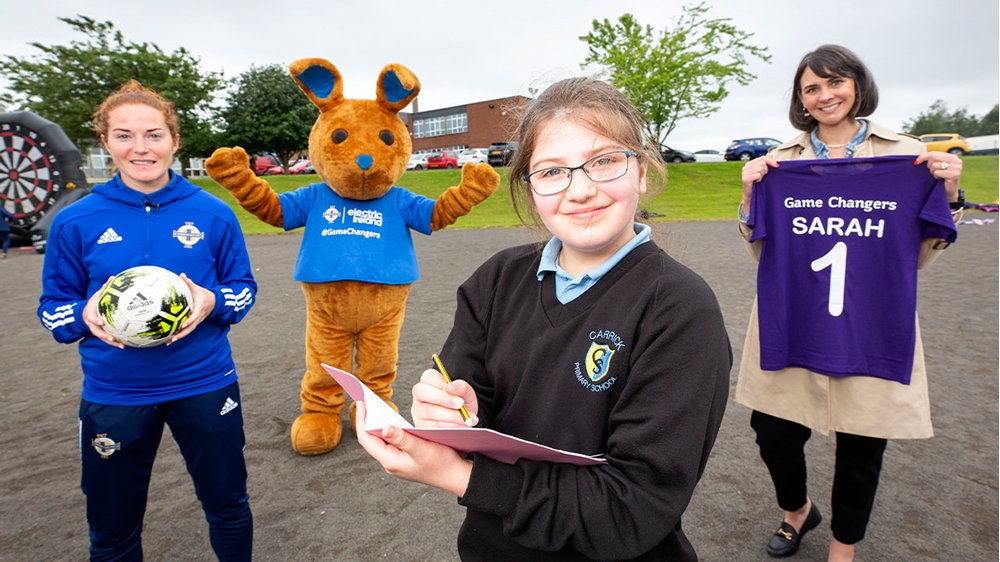 Nine-year-old Sarah Dickson from Lurgan in Co Armagh has been crowned winner of the Electric Ireland Shooting for the Stars children’s writing competition.

Sarah’s story about a girl who danced her way to footballing success captivated the judging panel which was led by Derry Girls actor and playwright Tara-Lynne O’Neill.

The story will now be illustrated by a professional illustrator, published in association with Blackstaff Press and then distributed through the Irish Football Association’s Shooting Stars network as well as being made available to schools and libraries across Northern Ireland.

Sarah learned that she had won the competition when Northern Ireland senior women’s team captain Marissa Callaghan and team-mates Toni-Leigh Finnegan and Abbie Magee made a surprise visit to her school, Carrick Primary in Lurgan.

“I’m so excited and feel so happy,” said Sarah. “I thought we were taking part in a football festival when Marissa called out my name and said I’d won! It’s so exciting. I can’t wait to see my story made into a book.”

The competition, organised by Electric Ireland as part of its Game Changers NI campaign in partnership with the Irish FA that supports girls’ and women’s football at all levels, received a great response and the judges said they were faced with tough decisions.

Clare McAllister, Northern Ireland Residential Manager with Electric Ireland, said of judging the competition: “Myself and my fellow judges were really impressed by the quality and the creativity shown by the entrants to the competition.

“Sarah’s story stood out for the imagination it showed; she was able to take the theme of girls’ football and weave a story that kept the reader interested from beginning to end. 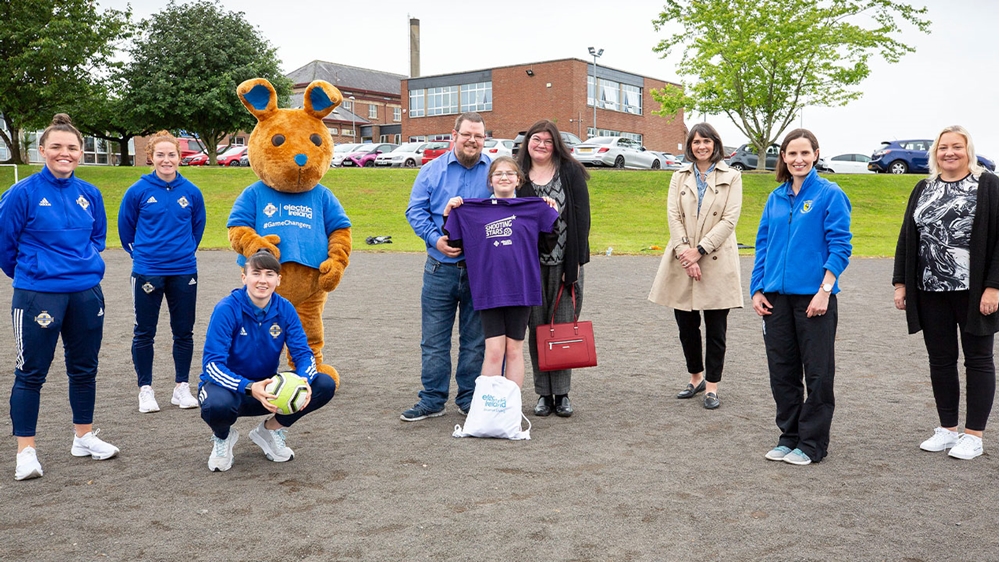 “In doing so Sarah is helping to bring girls’ football to a new audience and that is really important to our Electric Ireland Game Changers campaign as we are all about supporting the women’s game.

“Over the coming weeks we will be working closely with the illustrator and publisher on the production of the book and very much look forward to making it available widely in Northern Ireland.”

The competition invited children between the ages of 7 and 11 who are interested in football and stories to create their very own story about girls’ football. Joining Clare and Tara-Lynne on the judging panel were illustrator Rory Jeffers and Gail Redmond, Women’s Football Development Manager at the Irish FA.

Speaking about the process, Gail Redmond pointed out: “We at the Irish FA are really delighted to partner with Electric Ireland in this competition because we use story telling so much in our coaching of young girls.

“There were so many great stories to choose from. I’m glad to say we had the opportunity to pick two runners up who will each receive a Northern Ireland kit and, of course, a copy of the book.”