School visits by members of the Northern Ireland senior women’s team are among the activities being organised this summer by the Irish Football Association and the Irish FA Foundation to promote girls’ and women’s football throughout the country.

The success of the women’s team in qualifying for UEFA Women’s Euro 2022 has sparked huge interest in the women’s game across Northern Ireland – and the association is keen to keep the momentum going and to get more girls and women playing football.

Fittingly, Northern Ireland Women captain Marissa Callaghan, who scored in the two-leg play-off against Ukraine Women in April which secured Euros qualification, will kick-start the summer of activity with a visit to Newry High School in Co Down tomorrow.

She will take part in a Q&A at the school and provide insights on what it takes to become an international footballer. And she will be leading coaching sessions, too.

On Friday Rebecca McKenna will be visiting Kilcooley Primary School in Bangor, Co Down, to meet pupils and to see their creations for a kit design competition.

Also on Friday Marissa Callaghan will be visiting St Cecilia’s College in Derry-Londonderry to chat with students and run coaching sessions.

And next Friday the Northern Ireland captain will be the special guest at the annual prizegiving at Carrickfergus Academy in Co Antrim.

Marissa and Rebecca, plus team-mates Lauren Wade, Toni-Leigh Finnegan, Emma McMaster, Kerry Beattie and others, will also be out and about at the Irish FA Foundation’s summer football camps in July and August. 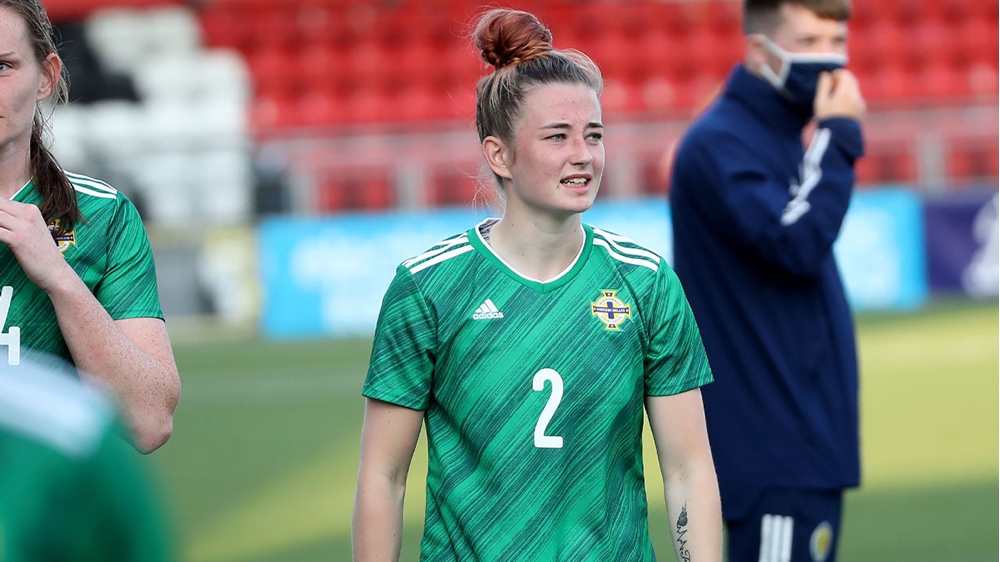 A total of 74 camps are being staged in venues across the country and there will be girls only camps in each of Northern Ireland’s 11 council areas.

Other activities to promote girls’ and women’s football are also in the pipeline.

Gail Redmond, Women’s Football Development Officer with the Irish FA Foundation, said: “Our senior women’s qualification for next year’s finals was truly a game changing moment for women’s football in Northern Ireland and one that will no doubt inspire a new generation of players to dream of wearing the green and white shirt.

“As we approach the one year countdown to the UEFA Women’s Euro 2022 finals in England we’re delighted to have our Irish FA Summer Football Camps, including girls only camps, back up and running and we would encourage children across Northern Ireland to get involved.”

Gail said extensive UEFA research has shown the majority of girls prefer to learn the game in girls-only environments as they have concerns regarding teasing from boys as well as boys’ domination of the activity and marginalising their involvement.

She also noted the primary motivation for many young girls participating in football is fun and enjoyment and traditional competitive sporting environments and highly structured activities can suppress this.

“The girls only camps are a great introduction to football in a non-competitive environment and, most importantly, they are all about having fun and meeting new friends,” Gail added.