Northern Ireland edged out by Ukraine 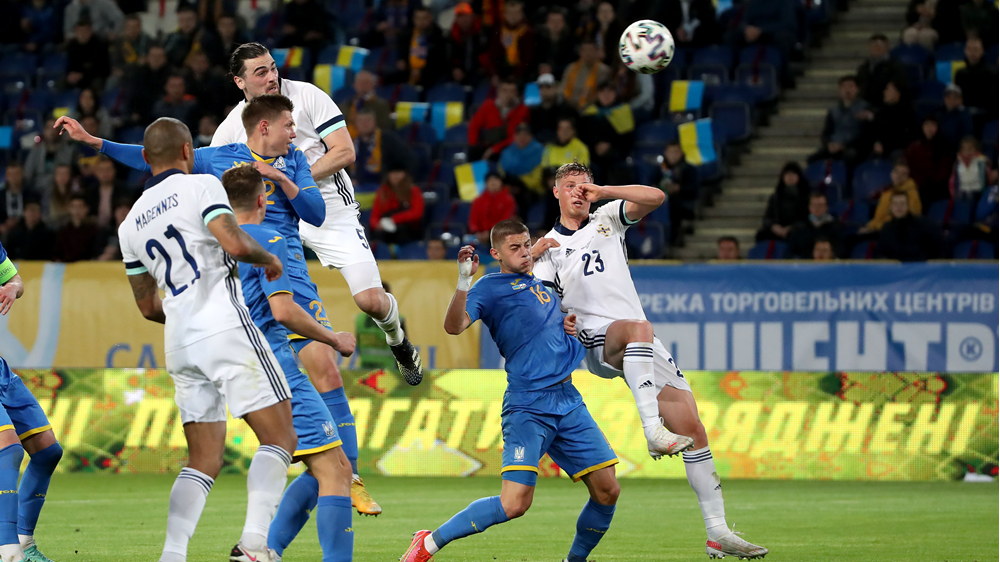 An early goal gave Ukraine the edge over Northern Ireland in tonight's international friendly in front of 15,000 fans in Dnipro.

Ukraine got off to a busy start, creating the opening opportunity with just a couple of minutes on the clock with Andrii Yarmolenko worked his way into the area only to shoot just wide.

The West Ham United man threatened again a few minutes later after being teed up by Oleksandr Zubkov but, on this occasion, he was denied by a brilliant stop from keeper Bailey Peacock-Farrell.

The hosts did find a way through on ten minutes. A corner from Oleksandr Karavaev was only partially cleared by the Northern Ireland defence for the unmarked Zubkov to give Peacock-Farrell no chance.

Ukraine continued to press with Ruslan Malinovskyi becoming the next to have a go with an effort over the bar from the edge of the area before Roman Yaremchuk received the ball from Zubkov but was thwarted again by Peacock-Farrell.

But it wasn't all one-way traffic. As the game progressed Josh Magennis wasn't far away from a Stuart Dallas ball midway through the first half with Ciaron Brown then seeing his attempt from Paddy McNair's free-kick kept out by Heorhii Bushchan.

However, Ukraine continued to look the more likely to score as Yaremchuk dragged an effort wide, Yarmolenko saw a later shot meet a similar fate while Shane Ferguson managed to block a close range attempt soon after.

Northern Ireland made a much better start to the second half. Josh Magennis had a left-foot effort from the edge of the area blocked by Mykola Matvienko.

Then Ali McCann glanced a header wide from another Dallas delivery and, just after the hour, provided a defence splitting ball to find substitute Kyle Lafferty who, in turn, knocked the ball on for Paul Smyth but unfortunately his effort went wide.

At the other end Yarmolenko had another chance but, again, Peacock-Farrell proved difficult to beat. And the 24-year-old shot stopper showed his worth once more later in the game to this time push the ball away from Artem Besedin as he attempted to pounce on the rebound from another blocked Yarmolenko effort.

Ukraine through they had grabbed that second elusive goal in the closing moments when, following an attacking move, Besedin tapped the ball home but he was adjudged to have strayed offside.