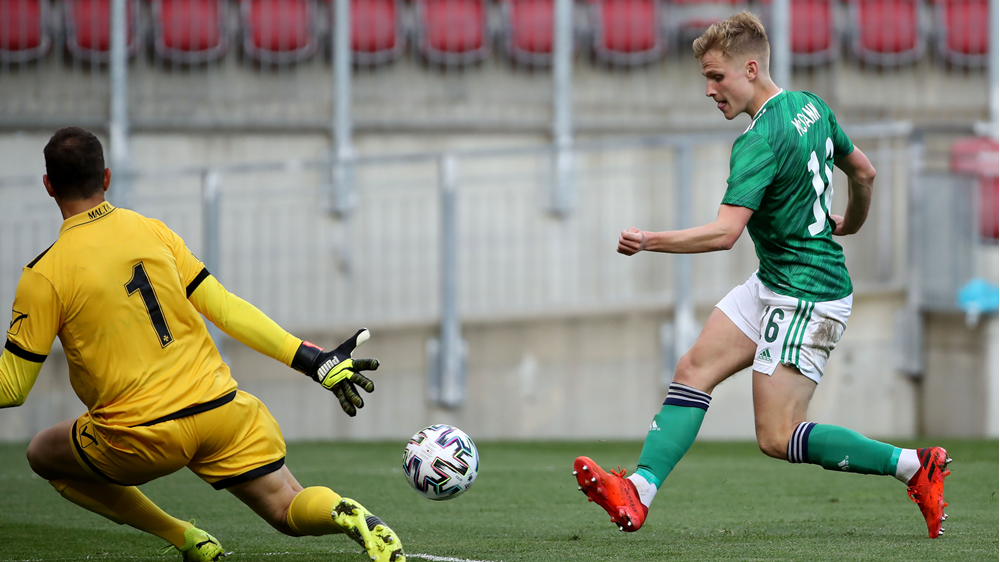 Northern Ireland are expecting Ukraine to be firing on all cylinders when they face them in a challenge match in Dnipro tonight.

Ukraine are off to the Euros later this month and Ian Baraclough and his players reckon they will want to head to the tournament with a spring in their step.

It was only confirmed yesterday that - due to an easing of Covid restrictions by the Ukrainian government - the game at the Dnipro Arena will not be behind closed doors as planned but will in fact be played in front of 15,000 fans (7 o’clock kick-off UK time).

The Northern Ireland manager is expecting the Ukraine fans to provide a carnival atmosphere, however he insisted that both he and his players are determined to spoil the party.

He said the 3-0 win against Malta in Austria at the weekend had visibly lifted his squad after a run of games where results did not match performances.

Baraclough told Ukrainian journalists yesterday that Andriy Schevchenko’s squad is packed full of powerful and technically gifted players and he knows it will be a tough test for his players in Dnipro.

However, he also noted there is a good spirt in his squad and that the senior players and younger players had mixed well together during the end of season training camp which began in Austria at the start of last week.

The Northern Ireland boss believes the Ukrainian players will want to impress their head coach at the 31,000-capacity Dnipro Arena as they vie for places in the starting eleven come the start of the Euros. Their first game at the UEFA Euro 2020 tournament is against the Dutch on 13 June.

Baraclough is expected to name a starting eleven similar to the one that lined out against Malta, although both Kyle Lafferty and Daniel Ballard have joined the squad since then. And Jordan Jones, who scored the opener in the friendly against the Maltese in Klagenfurt, has returned home.

Ukraine have a light sprinkling of star players in their ranks. The standout names are Manchester City wing back Oleksandr Zinchenko, West Ham United striker Andriy Yarmolenko and free-kick specialist and playmaker Ruslan Malinovskyi, who plays for Atalanta in Serie A.

The bulk of Andriy Schevchenko’s squad play their club football at home with either Dynamo Kiev or Shakhtar Donetsk.

Shakhtar goalkeeper Andriy Pyatov is the most experienced player in the squad, with 96 caps, although Yarmolenko has won 92 caps for his country and scored 38 goals.

Pyatov was the keeper when Northern Ireland famously defeated Ukraine 2-0 at Euro 2016 in France with goals from Gareth McAuley and Niall McGinn.