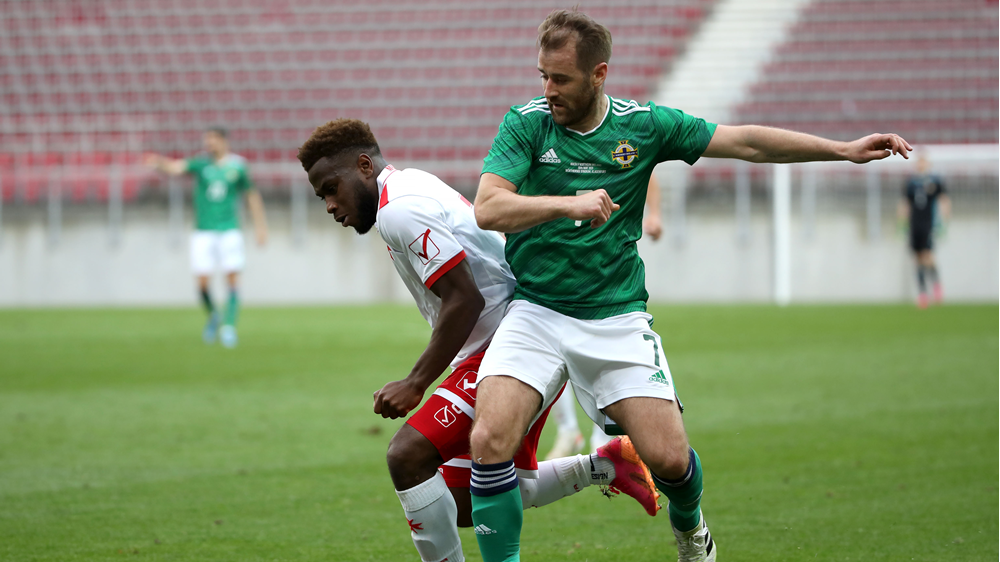 Niall McGinn is expecting Ukraine to be tough opposition for Northern Ireland when the sides meet in an international challenge match in Dnipro tomorrow (3 June).

The experienced winger, who earned his 65th cap against Malta at the weekend, says Ian Baraclough’s squad realise they will have to work their socks off against the Ukrainians to get a result.

“It’s going to be tough. We know from playing them at the Euros (in 2016) how good they are. They’ve got some very, very good players,” he said.

The game in Dnipro (7pm kick-off UK time) is a warm-up encounter for Ukraine, who will be competing at this year’s Euros later this month.

Ukraine automatically qualified for the Euros after topping a section (Group B) which also featured holders Portugal, Serbia, Luxembourg and Lithuania.

McGinn said: “It’s an important game for them because it’s players fighting for their positions ahead of a major tournament. They’ll want to put on a show.”

However, he also pointed out the Northern Ireland squad are in confident mood after defeating Malta in the first of their two end of season friendlies on the road.

He said the 3-0 win over Malta in Austria on Sunday had given everyone a lift.

“We have to take confidence from the win over Malta. Now that we’ve got that win we’re hungry for more,” he insisted.

At this summer’s Euros Andriy Schevchenko’s charges will take on Netherlands, Austria and North Macedonia in the group stage between 13 June and 21 June.

Tomorrow’s challenge match is being played at the Dnipro Arena, a 31,000-capacity stadium which is the home of Ukrainian Premier League side SC Dnipro-1. Around 15,000 fans are expected to be in attendance.