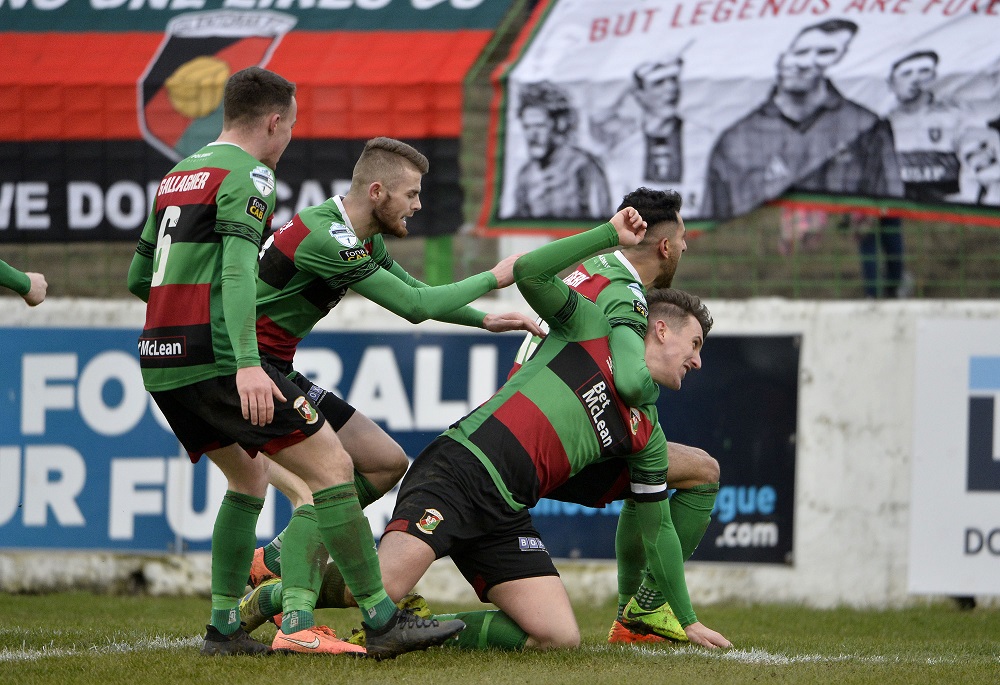 Glentoran knocked out holders Crusaders at The Oval after trailing at the break, with the Sky Blues accounting for last season's runners-up Ballinamallard United at Ferney Park while the Reds travelled to Dungannon to knock out Kris Lindsay's Swifts.

Defending champions Crusaders made the short journey to The Oval and got off to a great start with their endeavours duly rewarded after half-an-hour when Jamie McGonigle beat Elliott Morris with a deflected effort from David Cushley's cross.

It was a lead they held until midway through the second half when Marcus Kane levelled for the Glens with a right-footed finish through a crowded goalmouth before, with a couple of minutes to go, Robbie McDaid converted from the spot after Jarlath O'Rourke was penalised for handball.

Crusaders defeated Ballinamallard United in last season's decider, but any hopes the Mallards had of taking another step towards a second successive final were dashed by David Jeffrey's Ballymena United.

Joshua Kelly laid down an early marker for the visitors with the opening goal on 17 minutes, a looping finish over John Connolly from Cathair Friel's right-sided cross.

The Mallards weren't going to give up on their cup dreams without a fight and took the game to their Premiership visitors but despite their efforts the game was effectively killed off with a quarter-of-an-hour remaining when Tony Kane knocked home Ballymena's second with a penalty awarded after Adam Lecky had been brought down by Ryan Morris.

Meanwhile, at Stangmore Park, goals from Michael McCrudden and Ryan Curran saw Cliftonville progress at the expense of Dungannon Swifts.

McCrudden opened the scoring after an hour with a drive into the roof of the net at the far post following a period of pressure.

Cliftonville might have doubled their advantage soon but Conor McMenamin was unable to beat keeper Sam Johnston from the spot, awarded after Ross Redman had fouled Joe Gormley.

That proved to be a potentially costly miss when, on 73 minutes, Daniel Hughes levelled for the Swifts after making the most of Kris Lowe's lay-off.

But, just six minutes after that, Curran made no mistake with what proved to be the winner after Gormley squared the ball into his path.

On Friday night Coleraine kicked off the big cup weekend with a 3-2 victory over Larne at Inver Park.