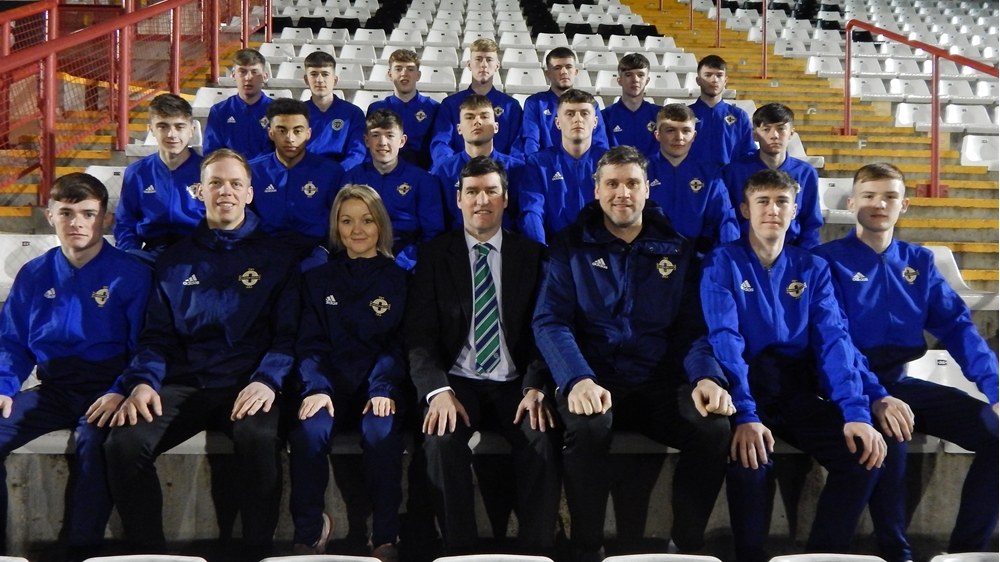 Northern Ireland’s U18 Schoolboys international team continued their preparations for the 2020 Centenary Shield by picking up silverware.

Last year’s U18 squad won the Centenary Shield – and the 2020 squad are aiming to retain the trophy.

Team manager Frankie Wilson’s preparations were boosted when his charges retained another piece of silverware, the Lynne Nicholson Trophy, with a convincing 3-0 victory over Jersey in St Helier yesterday.

Team captain Trai Hume, who was part of the 2019 squad, netted a double, while James Teelan also got on the scoresheet at the Springfield Stadium.

There was little between the teams in the opening period with defences on top, although the visitors missed a golden opportunity to break the deadlock on 39 minutes. Teelan cleverly won the ball on the halfway line and sent James Clarke racing clear. The winger looked certain to score with only the keeper to beat, however his shot was deflected just past the post.

Two goals just after the interval put Northern Ireland in command. On 50 minutes a clumsy challenge by Ben Le Rougetel sent Hume tumbling in the box and the Northern Ireland skipper picked himself up to plant the spot-kick into the corner of the net.

Three minutes later Teelan doubled the lead, winning the ball inside his own half and outpacing the home defence before lobbing the advancing keeper.

Hume completed the scoring with the final kick of the match when his thunderous drive from 30 yards flew into the roof of the net, giving the keeper no chance.

The win over Jersey follows a 2-0 victory against Australia’s U18 Schoolboys in Belfast last month.

The U18 Schoolboys team, run by the Northern Ireland Schools’ FA with support from the Irish Football Association, will be competing for the SAFIB (Schools Association Football International Board) Centenary Shield this spring. They will be up against Scotland, Wales and Republic of Ireland.

Image: The Northern Ireland U18 Schoolboys squad who took on Jersey in St Helier.