BATW | Stuart Dallas and Liam Boyce on target for their clubs 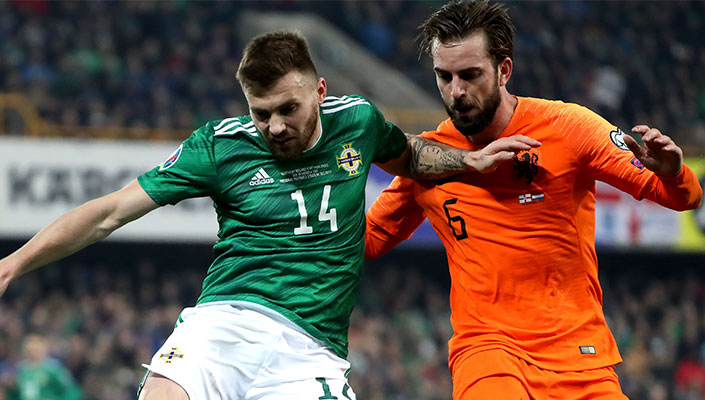 The 28-year-old’s deflected shot in the 89th minute may have secured a vital point at Marcelo Bielsa's side but the Yorkshire outfit are now without a win in their last three outings.

After the game, Dallas told LUTV: “In the first half we were well below the standards we set ourselves. They’re a good side they came here and pressed us high and unsettled us.

“In the second half, when we got going, it looked like there was only going to be one winner towards the end.

“Unfortunately we couldn't win the game, but if you can't win them then you've got to make sure you don't lose.”

Leeds travel to Birmingham City this weekend and Dallas admits it will be another difficult fixture.

“They’re all tricky at this time of the season,” he added. “We haven’t won in three games now, we’ll recover well and we’ll go there and hopefully we can get the three points.”

Meanwhile, in League One, Liam Boyce hit a brace as Burton Albion moved up to 12th in the table following a 4-2 home success over Tranmere Rovers.

The former Cliftonville striker has now scored 12 goals making him the highest Northern Ireland goalscorer in England and Scotland this season.

In Scotland, Northern Ireland under-21 International Alistair McCann scored his first-ever goal for St Johnstone to give Tommy Wright’s side a 1-0 victory over fellow strugglers Hamilton Academicals.

After three months out with a knee injury Rangers’ winger Jordan Jones was an unused substitute as Steven Gerard’s side secured a narrow 1-0 victory against Kilmarnock at Ibrox.

Also on the bench for the Glasgow outfit was Steven Davis who played the final 12 minutes after missing the last four matches with a calf complaint.

Elsewhere, central defender Tom Flanagan could be sidelined for the rest of Sunderland’s holiday fixtures after picking up a hamstring injury in the Black Cats scoreless draw at home to bottom-placed Bolton Wanderers yesterday.