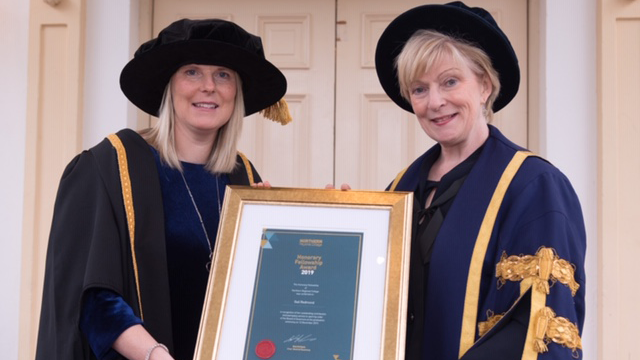 Gail Redmond, the Women’s Domestic Manager of the IFA Foundation, has received an Honorary Fellowship from Northern Regional College.

Since joining the Association over 10 years ago, Glengormley native Gail has played a key role in the development of female participation in the game.

A former student of the college, Gail studied National Sport at its Newtownabbey campus between 1997 and 1999. She then continued her studies whilst on a soccer scholarship at the University of Southern Mississippi, where she graduated with a bachelor’s degree in Sport Administration and Human Performance.

Primarily a midfielder, she was a standout player for the Golden Eagles and went on to feature as a stalwart for the Northern Ireland national team for six years.

I am deeply honoured to be a recipient of an Honorary Fellowship, especially coming from my alma-mater. I look forward to further developing our relationship into the future

Having worked across every area of women’s football – from primary school coaching to Co. Antrim’s programme co-ordinator to spending time as head coach for her US university – Gail has since risen to the role of Women’s Domestic Manager for the IFA Foundation.

As the charity tributary of the IFA, the Foundation aims to develop amateur, youth, disability and schools’ football. In this role, Gail strives to foster and grow the sport all the way from its grassroots right through to senior level.

Gail has maintained close links with the College as she built a career around her passion for football and now works endlessly to give the same opportunity to young people.

Ms Redmond said she was 'honoured' to receive the Honorary Fellowship.

“I am deeply honoured to be a recipient of an Honorary Fellowship, especially coming from my alma-mater. I look forward to further developing our relationship into the future,” she said.

“Whether as a student, an athlete, a coach or sporting ambassador, Gail is a true inspiration who embodies the ethos of Northern Regional College.”

Gail is one of four individuals to receive the honour who have had an impact upon the College and the local community.