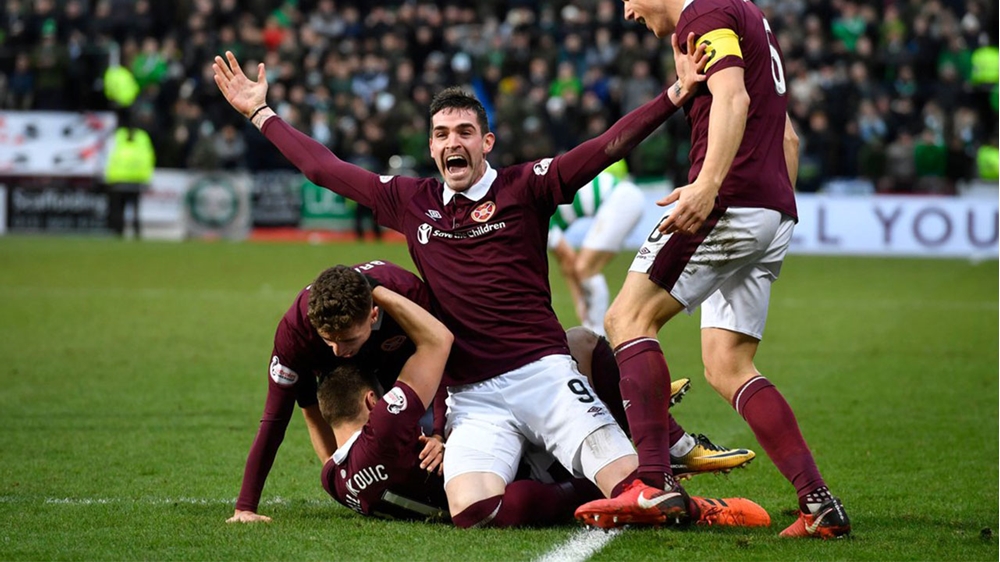 Kyle Lafferty fired home his 11th goal of the season as Hearts ended Celtic’s 69-game unbeaten record with an emphatic 4-0 win over the Scottish champions at Tynecastle yesterday.

The 30-year-old, who scored the second goal for Craig Levein’s outfit 10 minutes before the break, admitted after the game the result was one of the highlights of his career.

“I’ve been lucky enough to have been on a winning side a few times against Celtic,” said the former Rangers striker, “but this win is right up there as one of the best.

“To be in the team that stopped them from going 70 games without defeat is one of the best feelings I've been involved in.”

Lafferty is now just four goals shy of his best ever goal tally for a campaign which was 15 during his last spell in Scotland with Rangers in the 2010/11 season.

“It’s about getting consistency every game,” he added. “This season has probably been the most consistent I have been involved in.

“I know if I am on top of my game I will play any defender off the park.”

The only other Northern Ireland player to get his name on the scoresheet over the weekend was midfielder George Saville who chalked up his seventh goal of the season as Millwall defeated Middlesbrough 2-1 at the New Den.

In the Premier League, West Brom lost 2-1 at home to title-chasing Manchester United with both Chris Brunt and Jonny Evans involved in the build-up to Gareth Barry’s 77th minute consolation.

Brunt came on as a second half substitute to make his third appearance for the Baggies since his return to action from a calf injury.

“Hopefully I’ve done enough to put myself in the manager’s thoughts.”

Meanwhile, in the Championship Caolan Lavery was in the Sheffield United squad for the first time since recovering from a broken cheekbone, though he remained on the bench as the Blades lost their third successive league game following a 1-0 defeat at Preston.

Elsewhere, Ryan McLaughlin came on as a substitute for League One Oldham Athletic in their draw at Doncaster after being sidelined for two months with a hamstring complaint.

Another player back after a lengthy lay-off was Ben Kennedy who signed a new deal with Stevenage last week.

The 20 year-old from Lisburn had been out since October after undergoing a knee operation but made his comeback as a substitute midway through the second half of Stevenage’s 2-1 reverse at Exeter City.