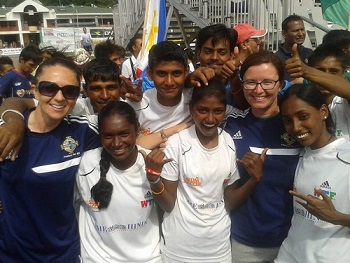 “VOLUNTEERING – WE’VE BEEN THERE AND DONE IT”

This month the staff/volunteer focus spotlight shines on Claire Rea. Claire is one of the Irish FA’s Primary School Coaches within the Curriculum Sports Programme, and knows from her own experience, the value and journey of a hard working volunteer.

How did you get involved within football as a volunteer?

At 17, I was playing football for Belfast United (currently Glentoran Belfast United). The club put me through my Prelim coaching badge, I guess today’s equivalent of the Level 1. I needed to practice what I’d learned before getting assessed so I offered to take a couple of our own training sessions. At that time and at that age, it was probably (and wrongly) more about what I could get out of volunteering. I moved to the U.S. about a year later to play collegiate soccer. As a team we would volunteer every so often by hosting open days and inviting local children along to learn about and play football. At Thanksgiving we would volunteer our time at a homeless shelter where we would cook, serve meals and clean. Whilst that wasn’t football related, it was a valuable learning experience for me on the importance of volunteering and just how needed it is. When I returned to Northern Ireland about 4 years ago, I was asked would I be interested in helping out with a boys team at my local youth club, Rosario. I hadn’t coached for over 2 years and was excited about the possibility of getting involved at a grassroots level. I’m now in my 5th season coaching this team. It has been by far, my most rewarding volunteering experience.

As said above, it was initially to gain experience and for my own benefit. In more recent years, it has been more about giving something back, particularly to my local community. I’ve just finished playing football myself and have spent quite a bit of time reflecting on who and what made my experiences in football so positive and valuable. And of course, the answer is the people and coaches who volunteered so much of their time to invest in me. As a young player and person, you perhaps don’t realise just how much time and energy a person gives to a player, a team, a club and that without those very unselfish people, myself and many others wouldn’t have had the playing opportunities we had.

When I was asked to volunteer and coach a boys team at Rosario, I also knew it would raise some eyebrows that a female would be coaching the team. There are a limited number of females involved in coaching boys football and I saw it as an opportunity to challenge myself and the stereotypes and prejudices that exist.

How did volunteering help you on a personal and professional level?

Volunteering has provided me with so much experience that I otherwise would not have had. As a coach, those experiences become invaluable, as you draw upon them to deliver better training, to resolve issues, or to introduce new ideas. On a personal level, volunteering has made me feel more connected to my community and other areas. Volunteering within football often results in you travelling to places and working with people that you otherwise wouldn’t, and I think that’s particularly important here in Northern Ireland. Professionally, volunteering has provided my with the skills, experience and connections that I’ve needed to carry out my current role within the Irish FA, delivering the Curriculum Sports Programme as a Primary Schools Coach.

I’ve learned that without volunteering and volunteers, very few, if any football teams would be able to exist and the number of players would be greatly reduced. Furthermore it’s a great way to meet and engage with different people and groups and it can be very rewarding and satisfying to know that the time and energy you have devoted can make a real difference. I’ve also learned that there are so many volunteer roles within football and it’s not just all about coaching. Volunteer support is needed across many different areas such as administration, finance, governance, community development, PR/Marketing and social media etc... Just like football players, each volunteer has differing skillsets that can play an important contribution to the overall team.

I have a few! I was fortunate enough to be asked to attend the Homeless World Cup in Poland 2013 as a coach/coach mentor. Personally, it was a great challenge for me to work with a group of young men who previously never had any experience of being coached by a female. The tournament itself is a powerful reminder of just how life-changing and positive football can be and again of how it can challenge stereotypes, in this case, that of homelessness. In terms of highlighting the importance of volunteering, approximately 60 countries were represented and the tournament is organised and run by over 100 volunteers who raise their own funds to travel and stay there.

About 3 years ago I volunteered some of my time to help start a girls programme at Rosario Youth Football Club. It wasn’t something I could volunteer a great deal of time too but I was able to help with the initial start-up of the programme. I’m delighted that Rosario now has approximately 50 girls attending training each week and one girls team that competes in the South Belfast Youth League.

I’m probably most proud of the progression of the Rosario 2001 team that I work with. I’m also very grateful for the many opportunities that have opened up for me as a result of volunteering such as serving as a committee member and being involved in other community programmes.

Would you recommend volunteering?

I wouldn’t just recommend volunteering but would go as far as saying that it is at the very heart of learning about yourself and discovering what it is you are passionate about. I would encourage everyone to volunteer, regardless of how little or much time a person can offer. There will always be a programme, team, club or committee member that could do with some support. The great thing about volunteering is that no matter how irrelevant you may feel it is to what you want to do or be involved in, you can always learn from the experience, and be able to draw upon that experience when you least expect it. Not to mention, volunteering in one capacity often opens the door to other volunteer or job opportunities that you otherwise may not be aware of.

In one sentence, why should people volunteer within Northern Ireland football?

It provides a great sense of reward, purpose and connection.

Do you still volunteer?

Yes, as mentioned above, I volunteer at Rosario Youth Football Club. I’m in my fifth season of coaching and working with the 2001 boys. I’m also a Rosario Committee Member. In the last 12 months, I’ve also made two trips to The Gambia in West Africa with Football 4 Peace, an organisation that works with local coaches and children there. With the help of many others, I was able to fund raise and volunteer my time there.

Tell us a fun fact about you?

I scored for Northern Ireland against the Republic of Ireland in a friendly before the men’s teams played each other at Lansdowne Road in 1999. For a while I was the only female Northern Ireland player to have done so, and I think I still might be! My playing career is ending now so I have to cling on to such moments! Oh and I don’t really know what colour my eyes are. 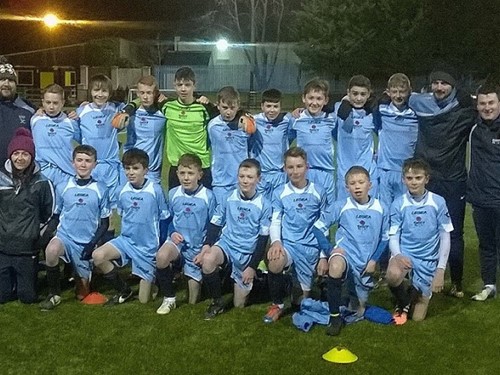 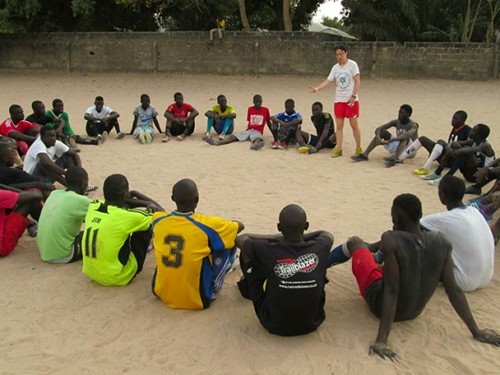 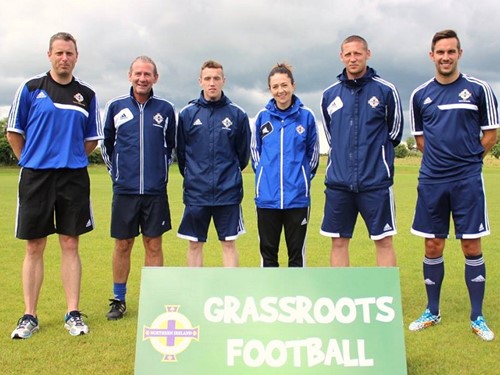 Pictured with some of the Irish FA Grassroots development officers