Ni U19 Women 9-1 Winners Against Estonia 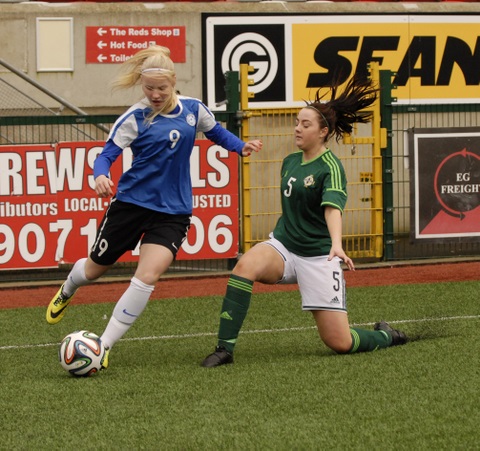 Northern Ireland looked energetic from the beginning and began the game on the front foot and applied early pressure on the visitors. The home side created some early chances down the flanks particularly from the skilful Aimme Mackin who tested a nervous-looking Estonian defence. It was after only 8 minutes that Northern Ireland striker Moya Feehan showed some excellent footwork on the edge of the box to skip past two defenders before sliding a lovely weighted through ball to Aimee Mackin who power-blasted her shot into the top right corner of the net to give Northern Ireland an early lead. The Northern Ireland squad continued to work hard and went in search of a second goal. Rachel Newborough was unlucky with a long range strike and Mackin almost doubled her tally but was unfortunate that her curling effort did not find the bottom corner of the opposition net. It was however the lively Mackin again who after an excellent solo run earned her team a penalty to which Moya Feehan coolly slotted home to make it 2-0 after 33 minutes played. The Northern Ireland team grew in confidence and Victoria Carleton went close with her shot from distance skimming the crossbar. It was on the 43rd minute that Feehan doubled her tally with a sliding tap-in within the six yard box following a superb run from defender Chloe Mc Glade. Northern Ireland ended the half strongly with a 3-0 lead.

HALF-TIME: 3-0
Northern Ireland head coach Alfie Wylie decided to adjust his squad during the interval and made three changes for the restart. Chloe McCarron within a few minutes of the half had an early chance, with her effort cannoning the crossbar. It was on the 52nd minute that Mackin got goal number two by finishing a low driven cross from Feehan. A matter of moments later on the 55th minute, Mackin bagged herself a well-deserved hatrick with an almost identical goal to her previous and give her team a 5-0 lead.

Substitute Sarah Connolly made an immediate impact and on the 71st minute she got her name on the score sheet by sliding one past the Estonian goalkeeper at the back post and celebrated in style. Connolly then doubled her tally on the 75th minute by charging down the Estonian defence, whose clearance struck the Northern Ireland International to roll into the back of the net to give Northern Ireland a 7-0 lead. Estonia’s first and only chance of the game came from the penalty spot to which Tamikk confidently finished to give the visitors something to build upon. It was late on in the game when substitute Nichiarran scored twice on the 85th and 89th minute, who showed real confidence and striker instinct in front of goal. The game ended 9-1 to an impressive Northern Ireland squad who provided an enjoyable spectacle for spectators.

FULL-TIME: 9-1
The second of the two friendlies against Estonia will be played Thursday again at Solitude, kick-off: 3.00pm. 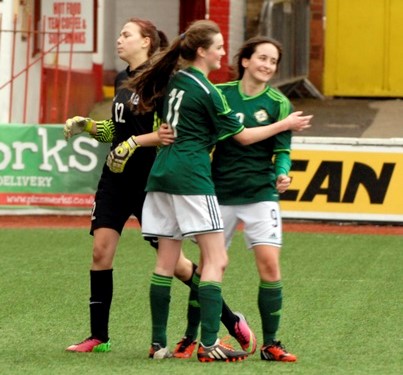 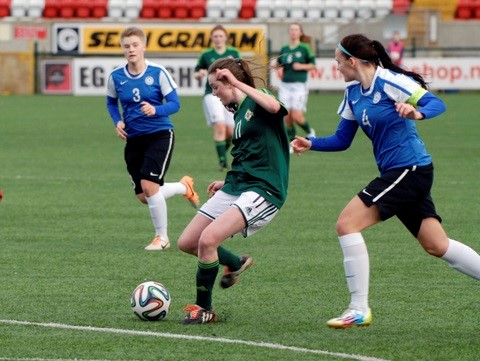 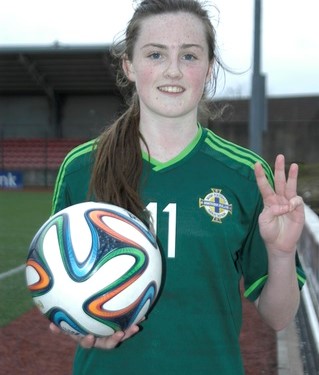 Aimee Mackin who scored a hat-trick. 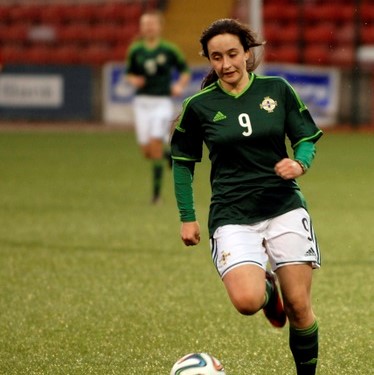