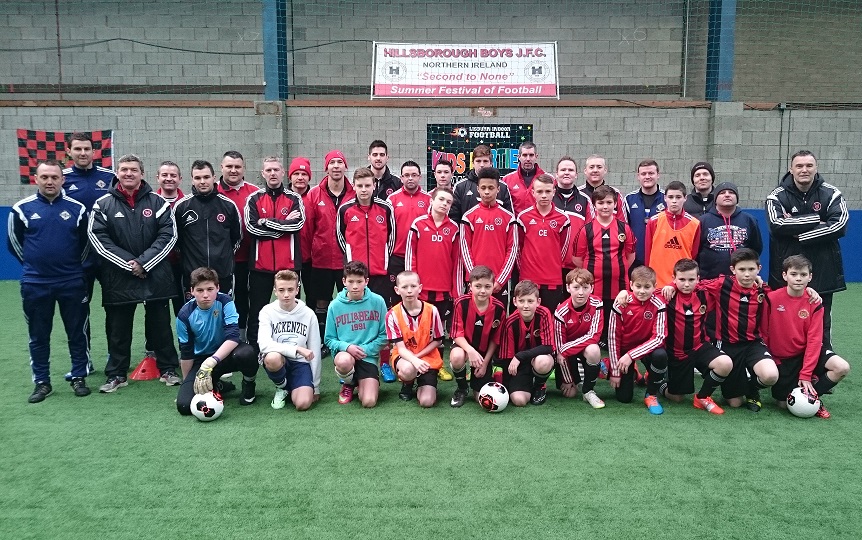 The coaching kicked off at 10am and concluded shortly after 1pm finishing with a Q&A session. Each hour two Irish FA coaches delivered their sessions with the extra coach then ‘floating’ answering any questions the on looking coaches may have had.

Having spoke to the club beforehand it was important these sessions fitted in with the new direction the club wants to move, in terms of ‘playing football the way it should be played’. Hence there was a strong focus on targeting player’s technical ability. The workshop honed in on ways to increase players contact time on the ball during training sessions and introduced coaches to techniques that would enhance their players’ confidence to play through the thirds.

The day proved to be a huge success with Hillsborough Boys club secretary Paul Alexander commenting, “The drills were current and delivered brilliantly by the Irish FA coaches. We can’t begin to thank the Irish FA enough for the day and hope we can benefit from more sessions like this in the future”.

The Irish FA coaches would like to thank Hillsborough Boys for their hospitality. It was great to see so many enthusiastic coaches, not only show up, but actively engage in the workshop. The players the club provided on the day not only showed off some great skills but conducted themselves in a professional manner to allow the day to run smoothly. Good luck to the club as they continue to strive to develop.