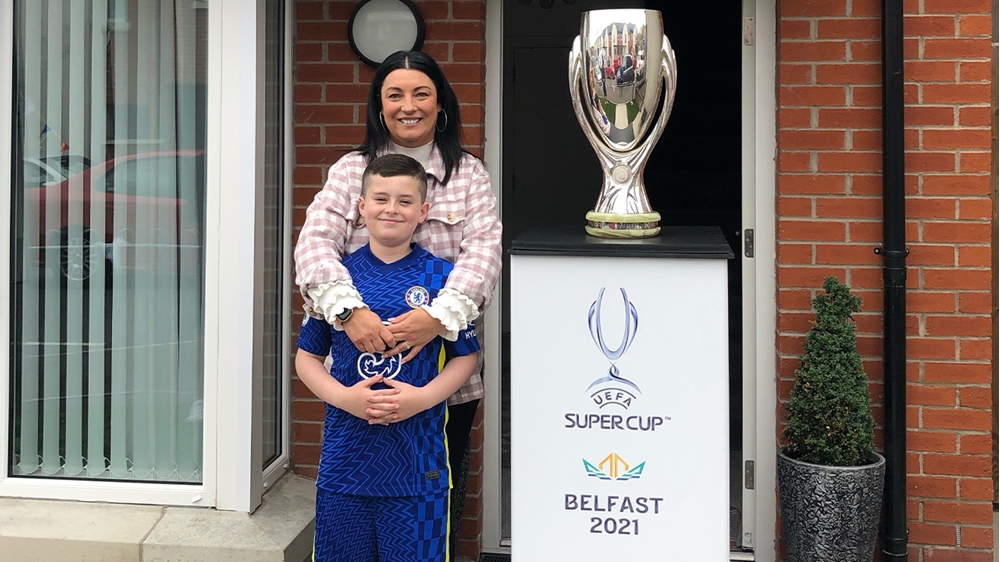 Two Belfast based football fans got the surprise of their lives when the UEFA Super Cup arrived on their doorstep this week.

Jacqueline Beattie and son Riley (10) won the opportunity after submitting photos of their own iconic ‘trophy lifts’ with an inflatable version at some of the capital’s famous landmarks including Cave Hill, Titanic Belfast and the National Football Stadium at Windsor Park.

Both Jacqueline and Riley are avid Chelsea fans, and their beloved Blues will be competing against Villareal in the UEFA Super Cup next month.

When he saw the trophy on his doorstep, she was gobsmacked:

“It means the absolute world to both of us to have Chelsea play in the Super Cup right here in Belfast. The National Stadium as Windsor Park is the best stadium in the world so we’re really excited.

“Anyone coming from outside Belfast will be made really welcome. The people of Northern Ireland are very friendly and we are also known for having the best atmosphere at Northern Ireland matches at the National Stadium too.”

The showpiece game is set to take place on 11 August and will be one of the biggest club games to be played in Belfast. And the Beattie’s can’t wait;

“We’ve met some of the star players over the years”, said Jacqueline. “We’ve watched them in different finals but this will top it all. It will be nearly as good as watching Northern Ireland. But not quite!”