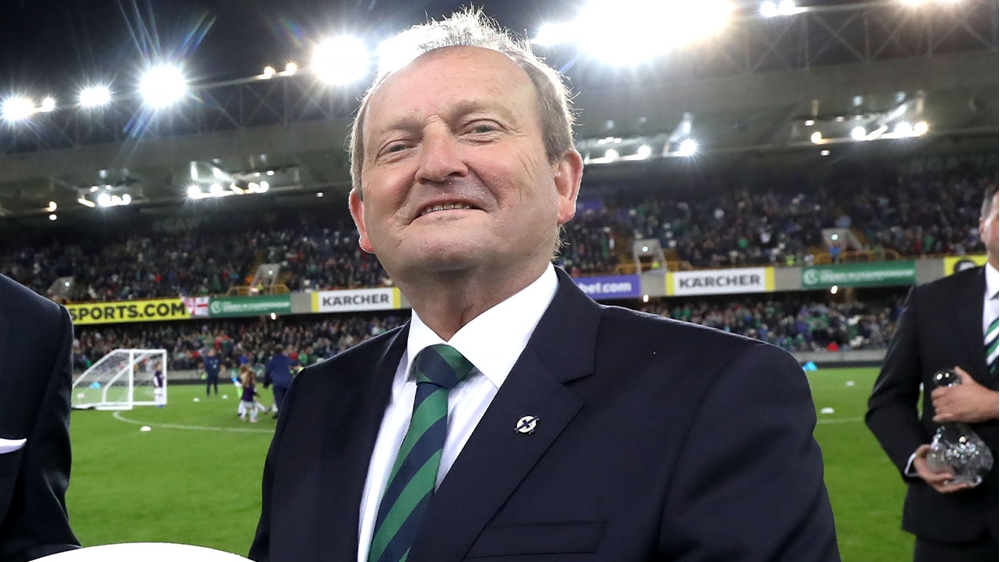 Irish Football Association Chief Executive Patrick Nelson has paid a warm tribute to David Martin after he stepped down as President of the Irish FA on completing his five-year term in office.

Mr Martin, who has been involved in football for more than 50 years as a player and an administrator, vacated the President’s role last night. His successor is Conrad Kirkwood.

Today Irish FA Chief Executive Patrick Nelson said: “It has been a privilege to work with David, particularly outside of Northern Ireland to make sure people in the football world know what we are all about.

“This is why we get the Super Cup and European tournaments; it’s because of the work going on behind the scenes. David has done a brilliant job in this regard, as did his predecessors.”

Mr Martin will now turn his attention to his new role as a FIFA Vice-President. In April he was elected to the vice-president position reserved by world football’s governing body for the four UK football associations. FIFA has eight vice-presidents.

In his tribute to the now former President, the Chief Executive further said being the Irish FA President is “a tough job” and he added: “David has delivered good things for Northern Ireland. I wish him the very best of luck, particularly in his role at FIFA.”

Mr Martin said: “The Irish FA has continued to grow year on year both on and off the field and I believe that it will continue on an upward trajectory.

“My best wishes to the President, Membership, Board and Council as they embark on a refreshed strategy for Northern Ireland football.”

One of his first duties as President of the Irish FA was to oversee the opening of the redeveloped National Football Stadium at Windsor Park in October 2016. He welcomed FIFA President Gianni Infantino to what he described as “a compact, world class stadium which can host our international and key domestic matches”.

On the pitch during his term as President the senior men’s team narrowly missed out on competing at bothFIFA World Cup 2018 and UEFA Euro 2020, losing play-off matches for both tournaments.

However, he was delighted when the senior women’s team qualified for their first ever major tournament, the UEFA Women’s Euro in 2022, after defeating Ukraine Women in a two-leg play-off back in April.

He said other highlights during his term were Northern Ireland hosting the Women’s U19 Euros in 2017 and the improvement of the Association’s governance structures.

Mr Martin said he particularly welcomed the creation of the Irish FA JD Academy in collaboration with UEFA, which has been developed so that the best young talent in Northern Ireland can now receive every opportunity of making a career in the professional game.

He was also a driving force behind the creation of the Presidents’ Cup in 2018. The annual cross-border competition - featuring the winners of the Irish FA Junior Cup and FAI Junior Cup - was established by Mr Martin and then FAI President Donal Conway.

He applauded the association’s programmes that operate in schools, youth clubs, workplaces and also in young offenders’ centres, many in partnership with government agencies who also see the benefits of football.

He said he was thrilled at the expansion of the association’s disability programmes, ensuring that people of all abilities have the opportunity to take part in football and are able to fulfil their potential.

He revealed one of the most pleasing aspects of his time as President of the Irish FA was when the Northern Ireland Powerchair team qualified for the World Cup Final Tournament for the first time ever. The finals are due to take place in Australia next year.

During his tenure, in 2019, he welcomed the Duke and Duchess of Cambridge to the National Football Stadium and he also hosted the President of the Republic of Ireland, Michael D Higgins, at the stadium.

Mr Martin helped to bring the UEFA Super Cup to Belfast this summer. It’s the biggest club match ever to be staged in Northern Ireland. He noted it was a project that was many years in the planning. The game between Chelsea (UEFA Champions League winners) and Villarreal (UEFA Europa League winners) is due to be staged at the National Football Stadium on 11 August.