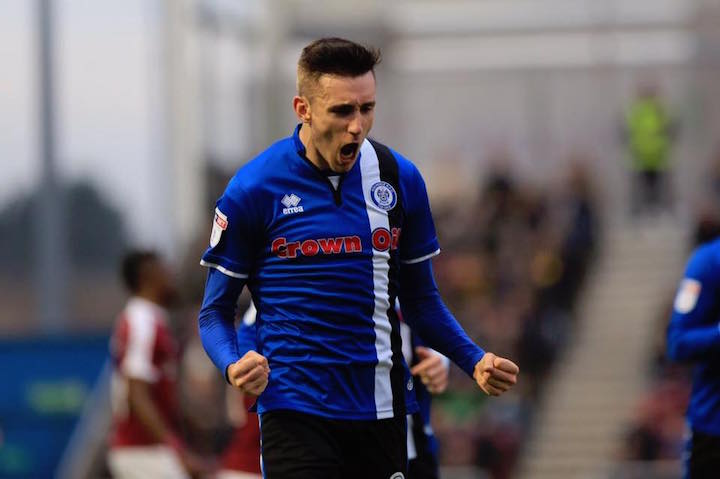 Matty Lund scored the first hat-trick of his career at the weekend as League One Rochdale twice fought back from behind to defeat Northampton Town 3-2 at the Sixfields Stadium.

The 26-year-old midfielder, who made his full international debut for Michael O’Neill’s side against Croatia last month, was delighted to get on the scoresheet but even more pleased to secure a crucial three points for his side.

“Getting three points is obviously the most important thing,” admitted Lund, who now has seven goals to his credit this term, “but to score three goals was brilliant for me. It was my first hat-trick and it couldn’t have gone any better."

“I’m happy to score one goal, never mind three! It’s good to be scoring and that’s what I want to do from midfield - I want to get in there and score some goals,' added Lund.

Rochdale have now won 15 of their last 21 games in all competitions and sit in the play-off positions in League One as they enter the busy holiday period.

Meanwhile in Scotland, 10-man Ross County defeated Aberdeen 2-1 in the Scottish Premiership with Liam Boyce and fellow international Niall McGinn both finding the net for their respective clubs.

Former Cliftonville striker Boyce opened the scoring for County with his 10th of the campaign before Niall McGinn came off the bench to equalise in the 68th minute, but the home side secured the victory with a goal two minutes from time.

County skipper Paul Quinn had special praise for Boyce who has now scored four goals in his last five games for the Highlands outfit.

“He’s just getting better and better,” he said. “He finds pockets, makes clever runs and gets us up the pitch.

“We are trying to play to his strengths without just lumping it long and playing off scraps.

“Liam has a flash of brilliance. We can see it in training every day. We are lucky to have him.”

Elsewhere it was a special weekend for Northern Ireland under-21 international Dale Gorman who scored his first senior goal as Stevenage edged closer to a play-off place with a 2-1 win at Barnet in League Two.

In the 38th minute Letterkenny-born Gorman ran onto a Matt Godden layback and coolly bent the ball around the goalkeeper and inside the far post from outside the box.

In the Premier League international skipper Steven Davis chalked up his third assist of the campaign as Southampton came from behind to win 3-1 at Bournemouth, while in the Championship Stuart Dallas’ cross set up Leeds United’s late winner at home to Brentford.

And there were three Northern Ireland players on target for their clubs in the National Conference on Saturday.

Midfielders Jeff Hughes and Paddy McLaughlin both scored from the penalty spot for Tranmere Rovers and Gateshead respectively while former under-21 international Liam Nolan scored his third of the season in Southport’s thrilling 4-3 home victory over Eastleigh.