The Irish Football Association has published a “progressive” new corporate strategy to guide its work over the next five years.

A Roadmap For Football – Irish FA Corporate Strategy 2022-27covers all aspects and levels of the game across Northern Ireland, from improving performance and participation levels to improving facilities, generating revenue, engagement, women’s and girls’ football and corporate social responsibility.

This strategy is progressive and will require determined effort from everyone at the association supported by leagues, clubs and the entire football family

More than 30 strategic objectives and over 100 individual actions are included in the document. The targets which the association is aiming to meet over the next five years are outlined in seven strategic pillars supported by four enablers. 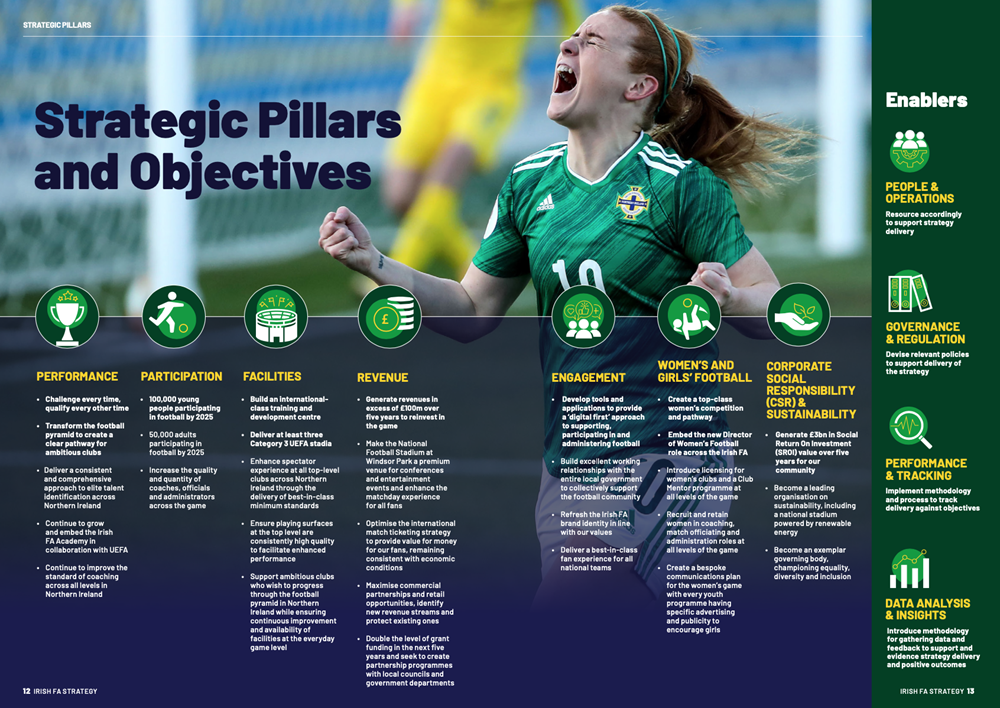 The chairman of the Irish FA Board, Stephen Martin, said: “This strategy is progressive and will require determined effort from everyone at the association supported by leagues, clubs and the entire football family.”

He noted the strategy seeks to grow the number of boys and girls playing football, introducing them to its positive health and social benefits, and to improve Northern Ireland’s stadia and the spectator experience.

And he pointed out other objectives include enhancing the system of coaching here and creating the conditions for more competition success with the senior men’s, senior women’s and other international teams.

Performing strongly on the international stage, transforming the football pyramid in Northern Ireland to support ambitious clubs and increasing the number of players, coaches, officials and administrators involved in football feature within the objectives outlined in the strategic pillars.

Building an international class National Training and Development Centre is another goal as well as boosting facilities at all levels of the game, including improving playing surfaces used by teams at the top level.

The association is also aiming to generate revenues in excess of £100m over five years to reinvest in the game and to make the National Football Stadium at Windsor Park in Belfast a premium venue for conferences and other events.

Other objectives include developing more partnerships and building excellent working relationships with Northern Ireland’s 11 councils and with the Northern Ireland Assembly plus boosting the women’s game at all levels and becoming a leading organisation here when it comes to sustainability and championing equality, diversity and inclusion.

Irish FA President Conrad Kirkwood said: “Football in Northern Ireland has the ability to cross all divides. It has the power to be a tool to bring about great change. It can help educate, promote health and wellbeing, and give everyone an unparalleled sense of belonging. Most importantly football can promote inclusivity like no other sport.

“The global Covid pandemic presented real challenges for each one of us. As we emerge from the worst of those challenges football – and the people with a passion for it – has a real opportunity to improve people’s lives. I hope that this strategy will be a roadmap to deliver those improvements.” 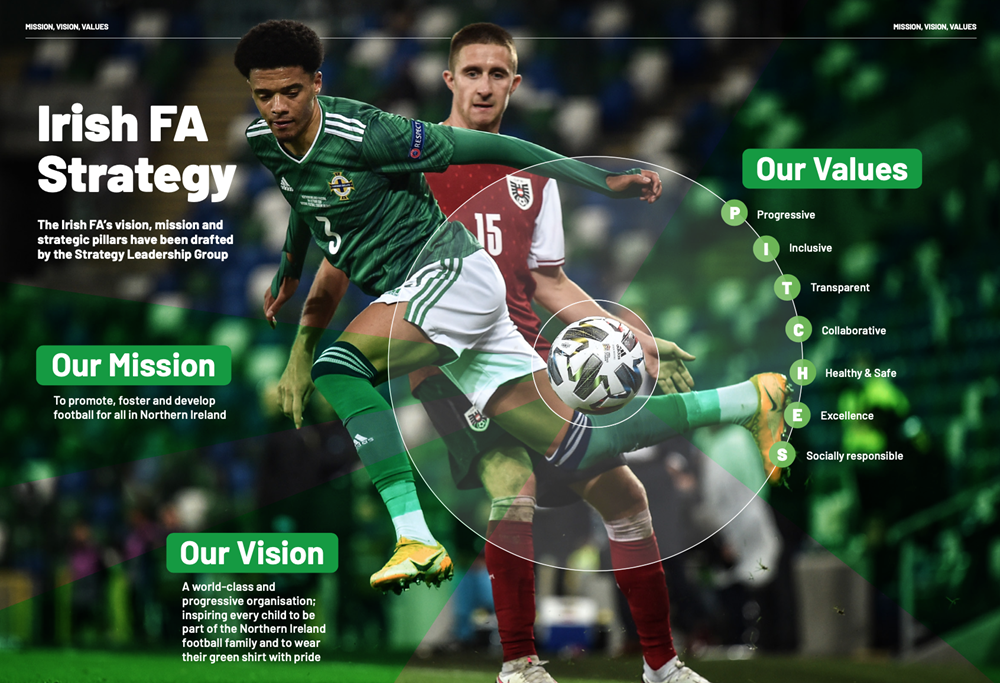 Last year the impact of football on everyday life here was analysed via a Social Return on Investment Model (SROI) developed through UEFA’s GROW programme. And the research showed football has economic, social and health benefits that currently add up to £470m in Northern Ireland per annum.

Another objective outlined in the Irish FA’s new corporate strategy is to generate £3bn in SROI for the community over the five-year period.

The association’s chief executive, Patrick Nelson, said: “The vision, mission and values contained in this strategy will give us daily reminders of why we are here and what is expected of us.”

The Irish FA consulted widely on the document’s contents. It staged up to 50 strategy workshops and working group meetings, and it held several discussion forums with stakeholders across Northern Ireland.