The Irish FA and Northern Ireland’s international teams are partnering with M&S Food to use the power of football to help families make healthier eating choices as part of an ‘Eat Well, Play Well’ campaign, it was announced today.

In a first of its kind, the multi-year deal will see M&S Food, the association and the teams shining a light on what players eat to help inspire families to eat healthier. 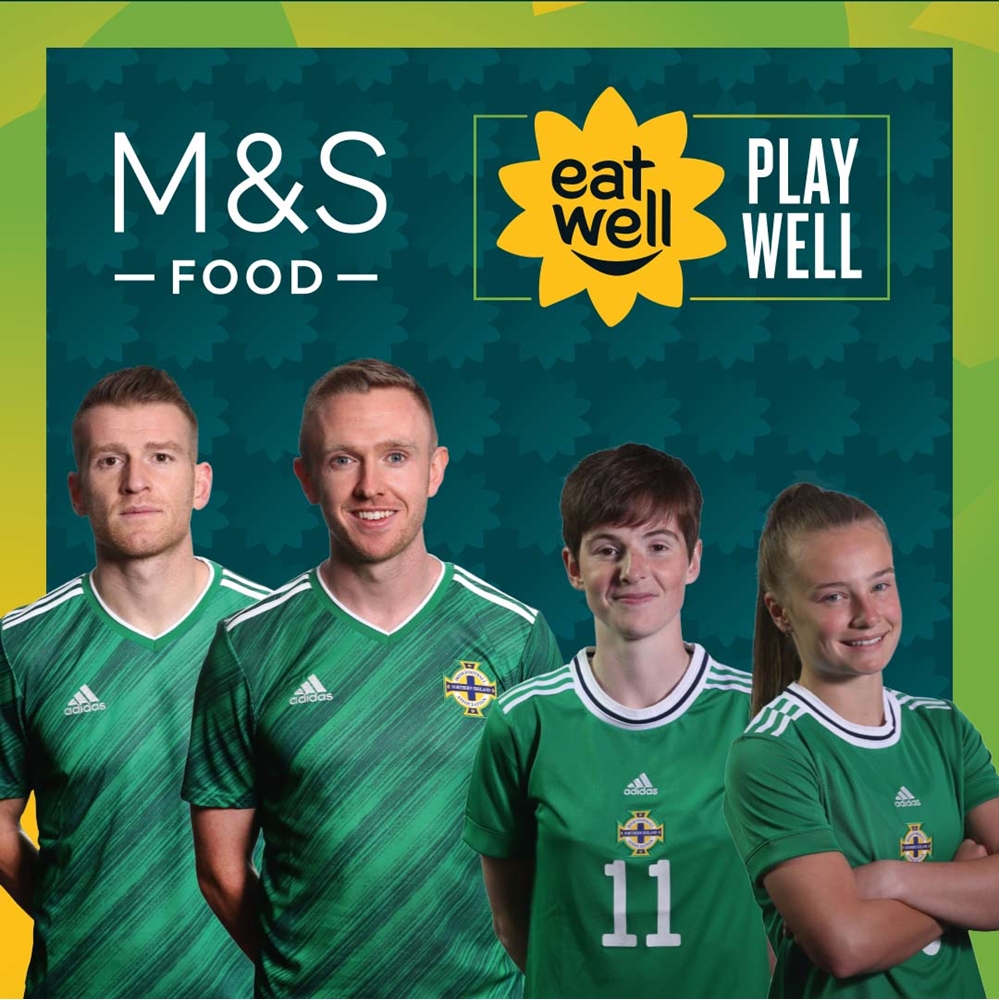 By using the influence of footballing heroes, the partners aim to not only make healthy eating choices easier for families but also show that healthy and balanced doesn’t have to be quinoa and kale, it can actually be a lot more fun and tasty.

The partnership comes as health is high on the country’s agenda, with 53% of people in Northern Ireland concerned about family health and 40% keen to get nutritious food into their diets, according to an M&S Family Matters survey.

Over the last few years M&S Food has invested significantly making its ranges, including Eat Well, better value while protecting the things its customers love most – its market leading sourcing standards and its delicious, innovative products.

The ‘Eat Well, Play Well’ campaign with the Irish FA is packed with initiatives, from in-store exclusives where budding sports stars can find out their favourite players’ recipes and eating plans to online insights where players, managers and legends share their favourite Eat Well products.

Northern Ireland senior men’s team manager Ian Baraclough said: “Nutrition in football has come a long way since I was a player in the late 1980s and ’90s; our post match meal was less sophisticated than it is today.

“Our current players are put on specific programmes to give them the best possible fuel for matches and to help them recover after the game, which is so very different to my day.

“Our players are such icons in Northern Ireland and I think this partnership with M&S Food and Eat Well will help give the budding footballers of the future a real insight into what their heroes are eating and inspire them to eat and train the very best they can.”

The partnership also includes the three other home nations, England, Scotland and Wales.

Stuart Machin, CEO of M&S, is passionate about the partnership and health, and making healthier choices more accessible is of utmost importance in the retailer’s strategy going forward.

He revealed: “Today I’ll be writing to all our customers about this partnership and our aim to make a real difference to health and inspire the next generation.

“By harnessing the influence of the players as role models we want to encourage children and families to make healthier food choices through choosing Eat Well.”

M&S has more than 1800 Eat Well products in its UK stores and is constantly developing and improving its ranges.

Nicola Finlay, Regional Manager in Northern Ireland, adds: “Our work with the Irish FA is much more than a sponsorship. We want to help change the health of the nation and the first step is to further increase the number of products with the Eat Well flower and make it easier for customers to spot them.

“Shoppers in Northern Ireland will be able to pick up specific national recipe cards in store so they can replicate their favourite player meals at home – whether that is breakfast, lunch or dinner. Budding stars can even find out what Eat Well products Northern Ireland players consume at training camps.”

Michael Forbes, Northern Ireland U19 star, who helped launch the partnership, commented: "Eating well is key for any footballer. At both club and international level, it is given real prominence and we have experts in place guiding us along the way.
“This partnership will help encourage more education around healthy eating for young footballers, boys and girls, across
Northern Ireland.”
Find out more about Eat Well here.
#EatWellPlayWell