Ballymena United led today’s final 1-0 for more than 80 minutes through a Robbie Weir own goal before another second half substitute, Josh Robinson, scored in the 92nd minute to force the game into extra time. And then came the dramatic winner from ex-Ballymena forward McMurray to leave the final scoreline at 2-1. 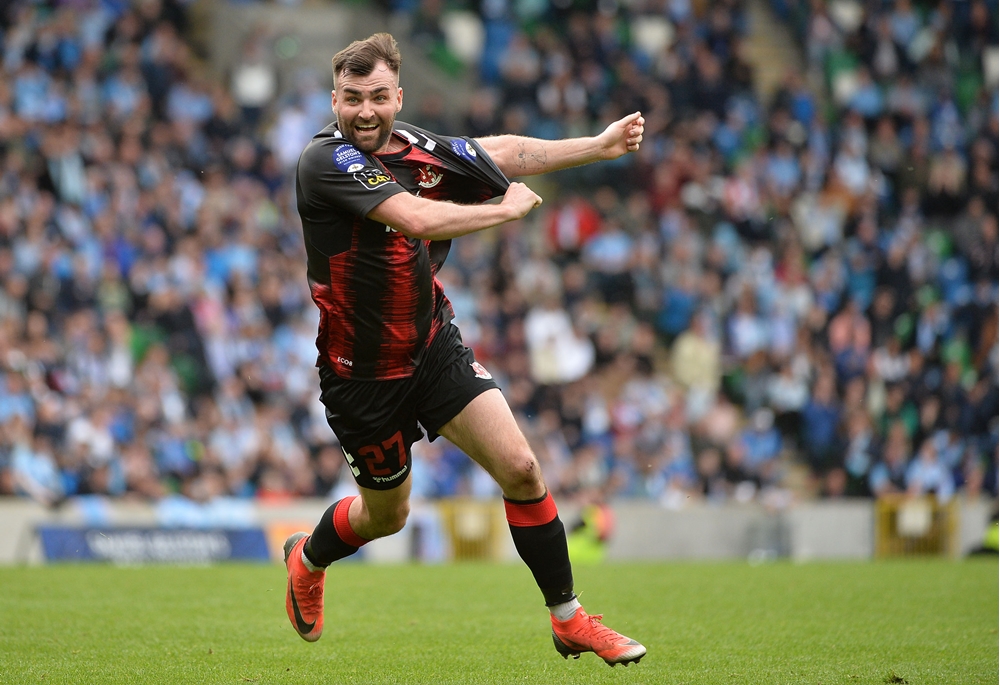 Ballymena had largely bossed the opening 90 minutes, however the Crues, renowned for their resilience and never-say-die attitude, had the better of it in the extra period in front of 7598 supporters at the National Football Stadium at Windsor Park.

It was Crusaders’ second Irish Cup triumph in four years, while Ballymena will have to wait at least another year to win a trophy that has eluded them for more than 30 years.

The game was an absorbing contest as Ballymena boss David Jeffrey and Crues manager Stephen Baxter, two of the most successful managers in the history of Irish League football, tried to outfox each other.

On seven minutes Sky Blues captain Leroy Millar, who was named man of the match, broke clear and fired in a low shot which was pushed behind by Crusaders keeper Jonny Tuffey.

From the resulting corner Ballymena took the lead. Andy McGrory’s whipped delivery was directed into his own net by Crues midfielder Weir.

Crusaders’ first effort on goal came after 16 minutes when Paul Heatley fired well over the top from distance.

Sky Blues striker David Parkhouse steered a header over the bar as the Braidmen continued to chase and disrupt the Crues.

In the 26th minute Ballymena keeper Jordan Williamson did well to get down at his near post to keep out a well struck Ben Kennedy free-kick from just outside the area.

As the half wore on Baxter’s team started to up the tempo and their opponents had to defend resolutely.

Heatley got in behind the Ballymena defence but his effort was deflected out for a corner by the covering Ross Redman.

A mix-up between Tuffey and Crusaders captain Billy Joe Burns saw Parkhouse nick the ball, however he could not get a shot away and Burns cleared the danger.

Heatley raced towards goal once again but his scuffed shot was easily collected by Williamson.

Ballymena started the second half brightly. McGrory curled a free-kick just past the upright from 25 yards before Ryan Waide missed a good opportunity, directing the ball over the bar from 12 yards.

Kennedy curled in a dangerous free-kick down the other end as the game began to open up. In the 62nd minute Heatley’s snapshot was superbly stopped by Williamson.

Crues substitute Declan Caddell almost got on the end of a clever Heatley delivery to the back post.

Ballymena substitute Paul McElroy went down in the area, under a challenge from Burns, however referee Tony Clarke waved play on as Ballymena players called for a penalty.

Heatley, easily the best player in black and red on the day, clipped the woodwork as the Crues piled forward.

Burns swung in an inviting cross which was met by Robinson, however Williamson was equal to his header.

In the closing minutes of regulation time Crusaders, who had been bolstered by a raft of experienced players introduced from the subs' bench, threw the kitchen sink at Ballymena’s defence and eventually they broke through. Two minutes into added time Crues goalkeeper Tuffey flicked on a Heatley corner to the back post where Robinson guided it into the net from close range. Incredible stuff.

Blocks and tackles were the order of the day as both sides battled hard.

Crusaders substitute Aidan Wilson headed against the bar as the north Belfast side turned the screw.

And then came the dramatic winner. With 30 minutes-plus of extra time played McMurray met yet another Ballymena clearance and volleyed the ball home from 16 yards. 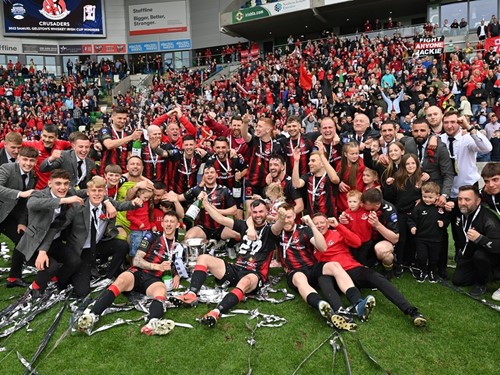 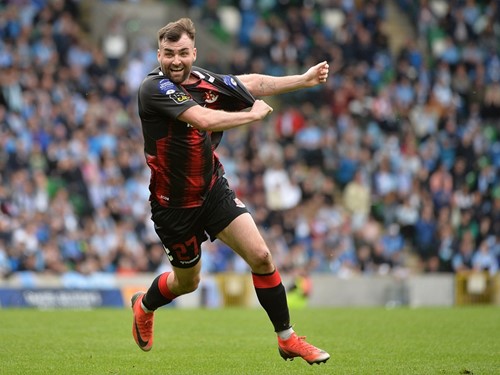 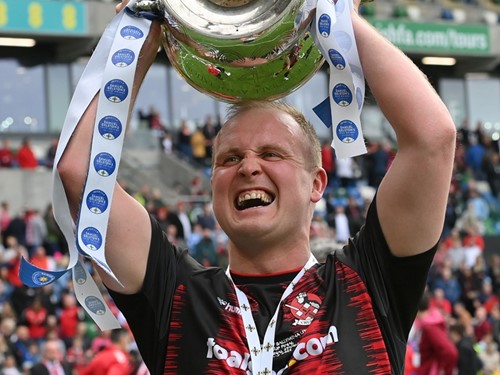 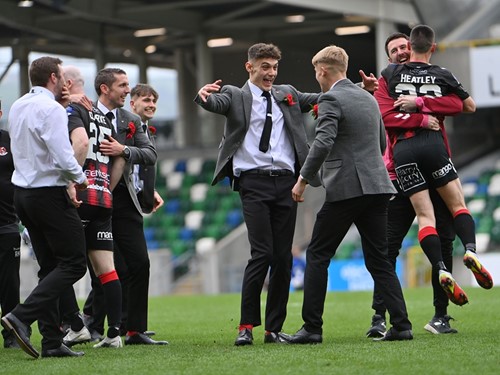 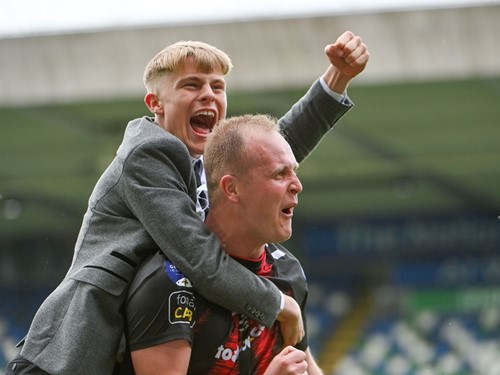 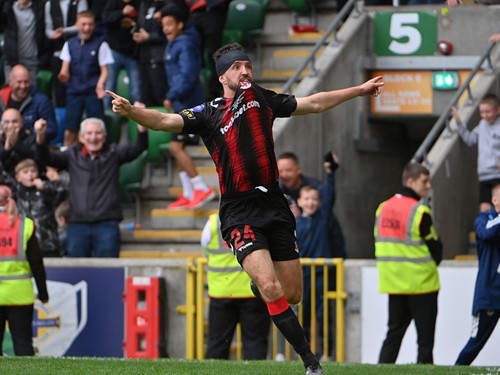 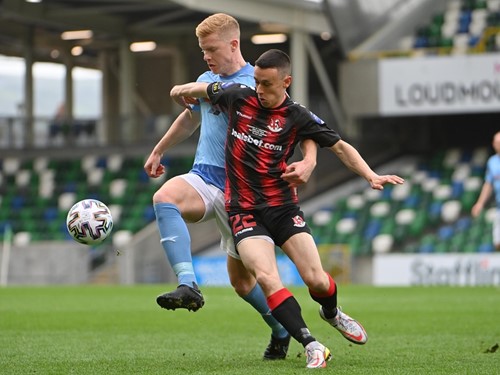 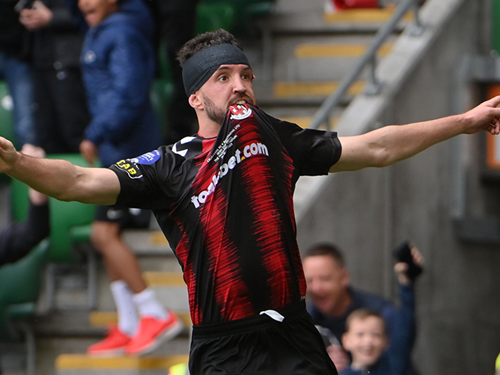 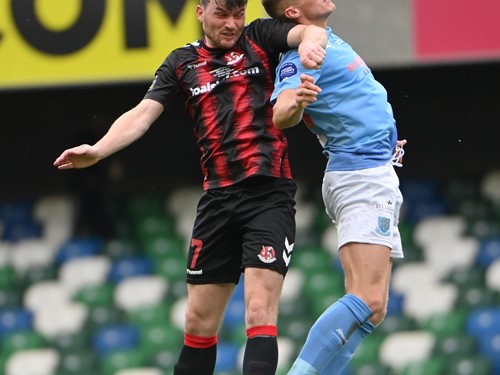 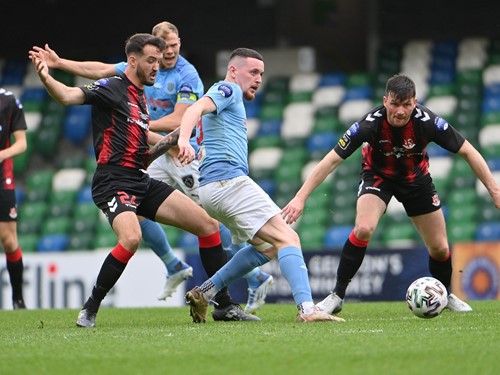 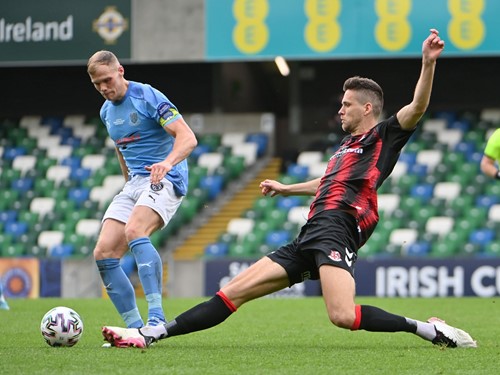 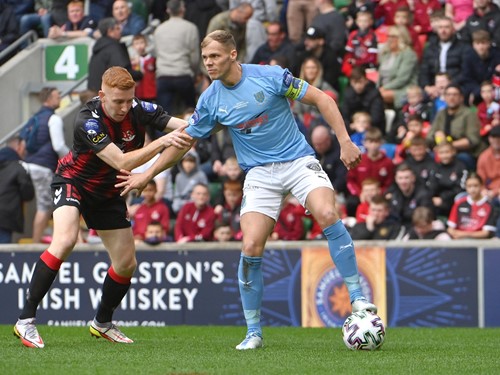 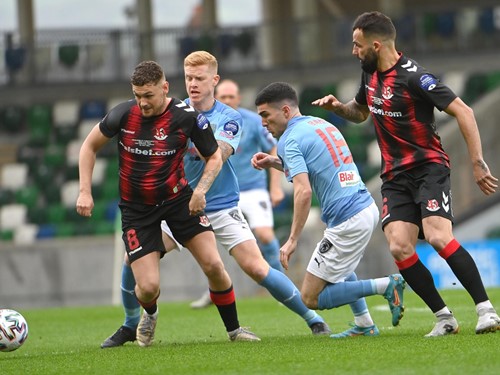 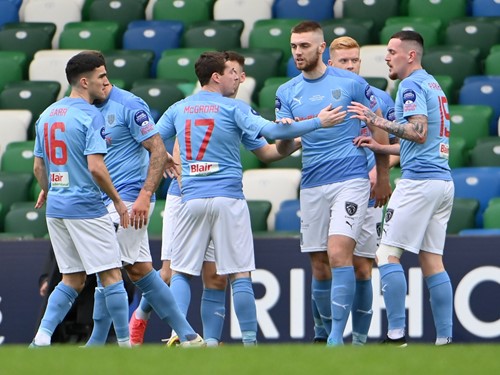 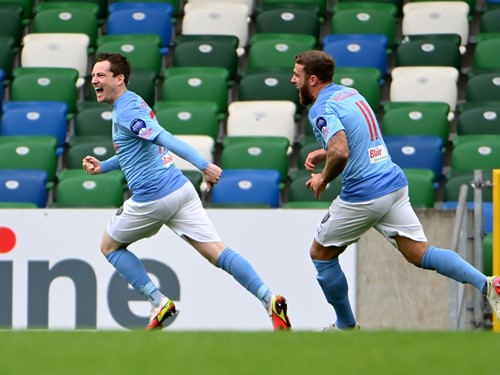 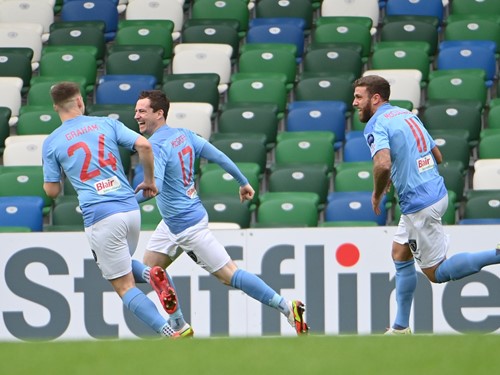