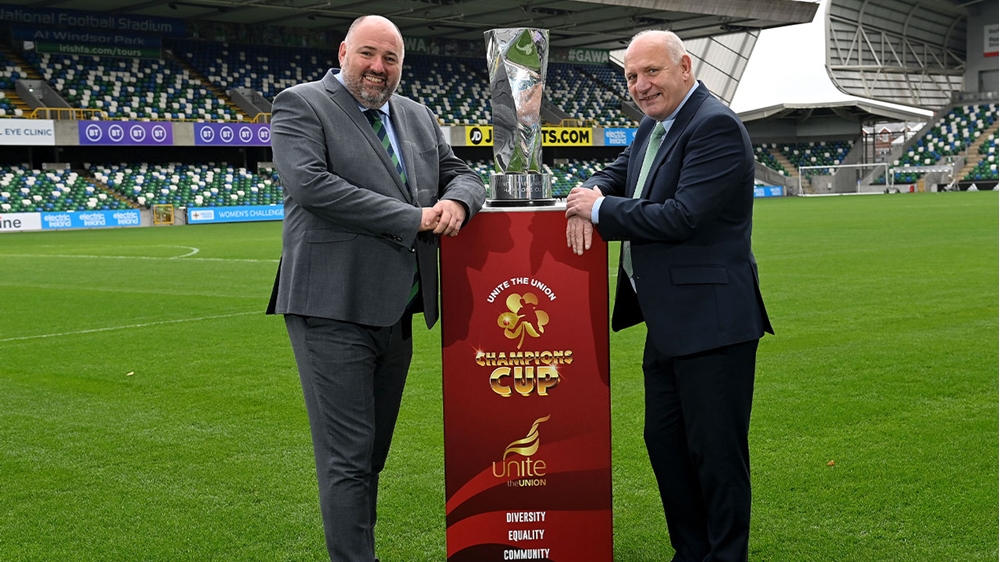 All three bodies had planned to host an expanded four-team version of the Unite the union Champions Cup, featuring two teams from the League of Ireland and two from the Irish League, but the after-effects of the Covid-19 pandemic have led to the cancellation after the postponement of the 2021 semi-final fixtures late last year.

Cross-border initiatives to celebrate diversity, promote equality and build community will continue, however, with Unite the union providing funding which goes directly into communities and schools in the catchment areas of the teams involved. Talks will now begin on the future of the competition itself and other initiatives.

Irish FA President Conrad Kirkwood said: “We will continue to work with our partners on this and other ventures that place an important value on community as central to our game.”

Unite the union Deputy Regional Secretary Davy Thompson said: “Whilst we are disappointed that the tournament couldn’t be concluded, we do acknowledge the pressures on clubs, players and staff coupled with the split seasons and the difficulties this brings when trying to organise a competition of this nature.

“Covid is something that no-one could have envisaged as we entered into this project and has played a significant part in this outcome. We will continue to work closely with both associations and the clubs to advance our community activities which were at the core of this competition.”

He said: “We have set up a no ties foodbank and formal collections for food banks on match days involving Unite Community members in partnership with the leading teams.

“Players from both Linfield and Coleraine are visiting schools in deprived areas as part of a Unite-sponsored computer skills education programme. The work between ourselves and the clubs is having a real impact. The visits will continue and we hope to expand them in the coming period.”

Unite’s Community Co-ordinator in the Republic, Rhona McCord, highlighted the success of the initiative with League of Ireland clubs.

“We also worked with clubs to launch a STEM education resource for schools in Tallaght, Clondalkin, Ballyfermot and Inchicore.”

League of Ireland Director Mark Scanlon said that following on from the Covid-19 enforced postponement of the semi-finals late last year it had proven difficult to find alternative dates for the semi-finals and final of the Unite the union Champions Cup 2021.

“The commitment of Unite the union to football and their incredible work in the community with our clubs has been inspirational and we thank them for that. We will now work with all stakeholders on the off-the-field initiatives that have already proven so popular.”