Northern Ireland Women are on their way to the Euros next year following a gutsy victory over Ukraine Women in Belfast tonight.

The 2-0 win at Seaview in the second leg of their UEFA Women’s Euro 2022 play-off means the senior women’s team have reached a major tournament for the first time in their history.

Following their 2-1 victory over Ukraine in the first leg in Kovalivka on Friday, Kenny Shiels’ side produced another excellent performance to secure a 4-1 aggregate win.

Northern Ireland were defensively sound throughout and classy goals from Marissa Callaghan and substitute Nadene Caldwell were enough to seal the historic success.

Ukraine, showing four changes from their starting eleven on Friday, looked purposeful in the early exchanges but the first chance fell to Northern Ireland. Following a scramble in the Ukraine box, Laura Rafferty scooped a shot wide of the post.

Then Northern Ireland captain Callaghan, who replaced the injured Rachel Furness in the number 10 role, had a snapshot blocked and a neat through ball from Sarah McFadden just failed to reach Kirsty McGuinness as she threatened to break free down the left.

Ukraine, with Olha Boichenko looking dangerous on the right flank, delivered a series of crosses into the Northern Ireland penalty area which were headed clear by Julie Nelson.

A floated free-kick into the area from Olha Basanska was well handled by Northern Ireland keeper Jackie Burns before Basanska was booked for a late challenge on Rebecca Holloway.

On 32 minutes Northern Ireland striker Simone Magill fired in a low drive from an angle which was collected at the near post by Ukrainian keeper Kateryna Samson.

Towards the end of the half the visitors pushed forward and the home defence had to dig deep to keep them out. There were some timely blocks and interventions, with the experienced trio of Nelson, Ashley Hutton and McFadden in the thick of it flanked by Holloway and Rebecca McKenna.

On the stroke of half-time Ukraine captain Darya Apanashchenko, who was beginning to look dangerous with her close control and slick passing, drilled a low shot wide of the mark before Nelson stepped in to stifle a penetrating run into the area by Olha Ovdiychuk.

Northern Ireland took the lead on 55 minutes when Nelson floated a free-kick into the box towards Callaghan and the skipper flicked the ball on and then past the advancing keeper before slipping it into the net from an extremely tight angle. It was a lovely piece of skill.

Moments later the Ukraine defence were under pressure again as Magill and McGuinness combined, however McGuinness was forced wide and her low cross drifted out of play.

The visitors continued to press but both Nelson and Hutton, using all their experience to great effect, were imperious at the back.

Burns expertly plucked a powerful cross out of the air before Chloe McCarron made a great break down the right, outpacing the Ukrainian defence, however she just failed to find Magill with her low pass.

Down the other end McFadden produced a superb challenge to thwart a Ukraine attack, while Ovdiychuk fired a shot over the top.

In the 87th minute Ukraine were reduced to 10 players when Natiya Pantsulaya was shown a straight red for blocking off McFadden as she was running towards the Ukrainian area.

As the game entered six minutes of added time Northern Ireland substitute Sam Kelly produced a lovely piece of skill to force a corner and then she scooped a shot wide from distance.

Right at the death Caldwell sealed the win for Northern Ireland. Magill nicked the ball off a Ukraine defender and nudged it to the midfielder, who cleverly rounded the keeper and stroked the ball home.

A place at Women’s Euro 2022 in England had been secured on a historic night for women’s football in Northern Ireland. 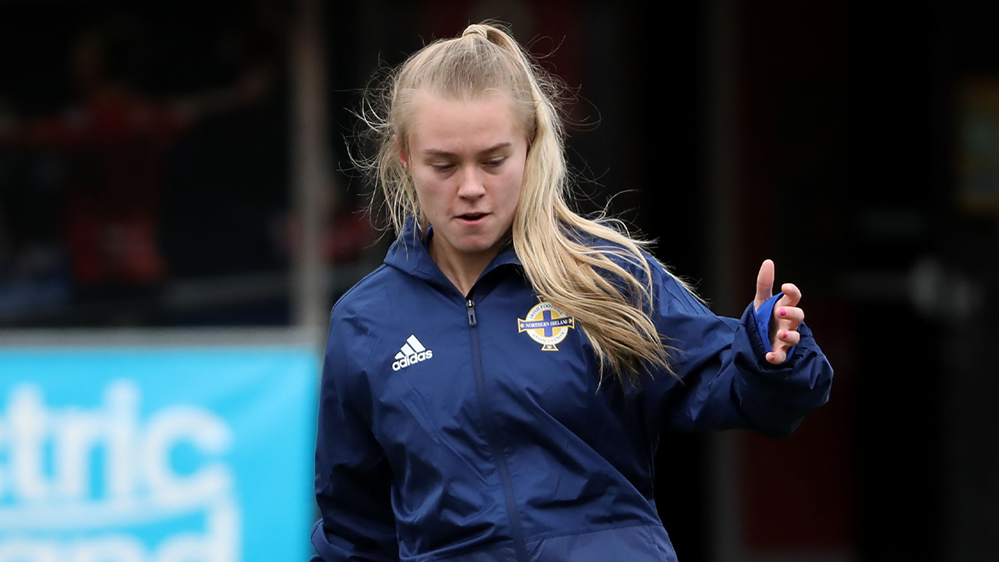 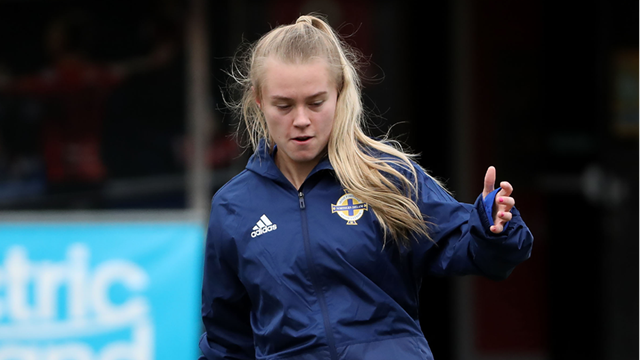