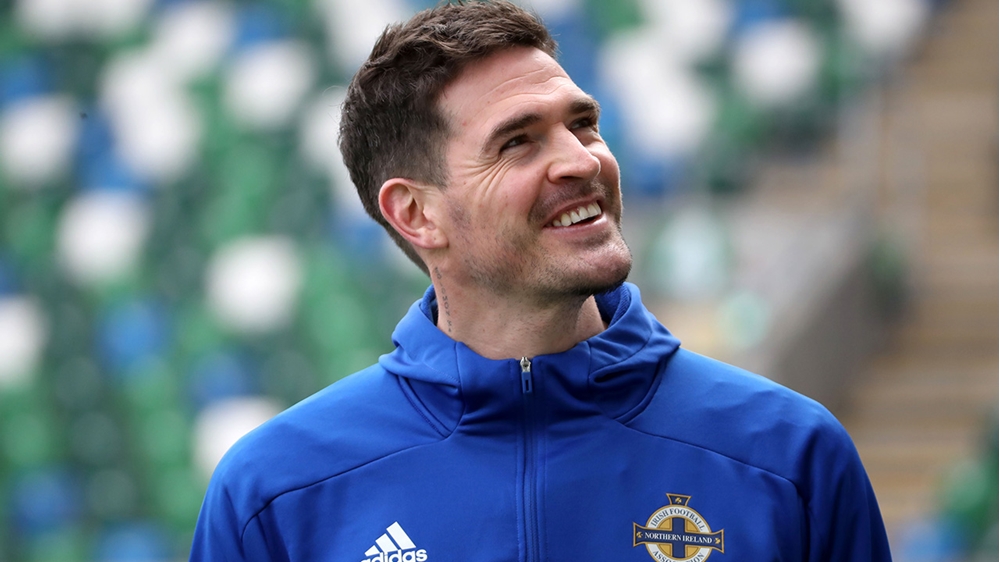 Kyle Lafferty scored an eleven-minute hat-trick as Kilmarnock eased their relegation worries with an important 3-0 victory at home to Dundee United on Wednesday evening.

It was the Fermanagh-born striker’s second hat-trick in four games for the club and his 10th goal for the Scottish Premiership side whom he only joined in mid-February.

Speaking to the BBC after the game, Killie boss Tommy Wright readily admitted he would love to keep the 33-year-old at Rugby Park for the foreseeable future.

“I told Kyle when he came here that this could be the place for him to play for the next 2 or 3 seasons,” said Wright, whose side are now a point clear of the relegation play-off’s. “He wants to be based in Scotland, so hopefully we will get enough points to stay up and we will look at trying to tie him down for a bit longer.

“But I’m also realistic and if he keeps scoring goals there may be bigger clubs come in for him,” he added. “I do know one thing, that if we stay up the club will do everything they can to keep him.”

There were goals galore for Northern Ireland players in midweek. Hull City striker Josh Magennis took his total for the season to 17 following his brace in the 2-2 draw at home to League One play-off hopefuls Sunderland who had on-loan winger Jordan Jones to thank for their opening goal.

Dion Charles reached the 20 goal mark this season after converting twice from the penalty spot for Accrington Stanley in their 2-1 home success over Doncaster Rovers; their first victory in four matches.

In the Championship George Saville netted his sixth of the campaign as Middlesbrough defeated relegation-threatened Rotherham United at the New York Stadium, while in League Two midfielder Alfie McCalmont took his goal tally to double figures this term with his third in four games as Oldham Athletic won 3-0 at Harrogate Town.

Meanwhile, Will Grigg, who is on loan at MK Dons from Sunderland, ended his 10-match drought with a goal and an assist in the Dons 2-0 success at Bristol Rovers

“He deserves the goal,” said MK Dons manager Russell Martin. “We created a lot of chances, got in some good areas, but it was a sign that we score the ugliest one! I'm delighted it fell to him.

“He (Grigg) contributes hugely. There’s a lack of ego, he’s bought into it, he’s really valuable to us. He’s a guy we really like, he really suits what we do and he’s getting better with every game,” he added. “He has stepped up, got an assist tonight as well. He got the goal he deserves though.”

On the injury front, Millwall’s Shane Ferguson will miss the remainder of the season after having an operation on a groin strain, however, there was more positive news on  Birmingham City’s Caolan Boyd-Munce, sidelined since November with a thigh injury and Charlton Athletic striker Conor Washington with both players now back in training.

Finally, there were assists during the week for Paddy McNair and international skipper Steven Davis, while after a run of 22 games as an unused substitute, 20-year-old defender Daniel Finlayson finally made his debut for St Mirren as a substitute in their 3-1 victory at Ross County.