Alfie Wylie’s Under-19 side started preparations for their own Women’s Euro qualifiers later this year with a training camp.

The competition still features one-venue mini-tournaments but now includes two leagues (A and B) with promotion and relegation leading to the 2022 finals. 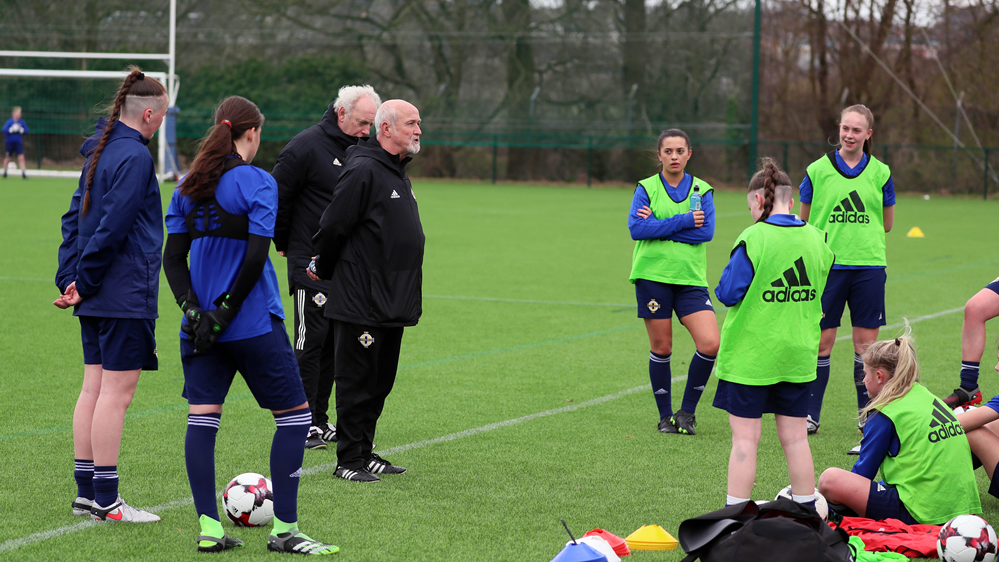 Northern Ireland’s WU19s have been drawn in Group A5 with Switzerland, England and Republic of Ireland, with the games taking place in October.

“The hard work starts now,” said Wylie. “Those games will be upon us in no time at all and the opposition is fairly formidable. We are in the first division of qualifying so we need to be at the very top of our game.

“As ever we’ve given focus to our squad development off the pitch as well as on it and have engaged with the likes of Hockey Ireland and the GAA to take some good practice elements from those sports to see if we can transfer anything over.”

And the camp, which took place at the Newforge complex in south Belfast, allowed former Northern Ireland defender Hughes to share his expertise.

“I have known Aaron for many years and I knew exactly what he could bring to a camp like this. It gave him a chance to develop his coaching skills and the players a chance to be mentored by a modern day Northern Ireland great,” said Wylie.

The WU19s coach also revealed he emphasised to the players taking part in the camp that the current senior women’s team squad features several players who were part of the U19 set-up within the past few years.

“The players recognise there is a pathway to the senior team and that the U19 level is the final step before the seniors. They know that if they perform well they have a good chance of earning a call-up to the senior panel,” he said.

UEFA’s WU19 competition returns after the 2019-20 and 2020-21 editions were cancelled due to the Covid-19 pandemic. Czech Republic will host the WU19 European Championship finals next year.

Northern Ireland’s WU19 squad will meet up again in June at a training camp to continue preparations for their Euro qualifiers this autumn.