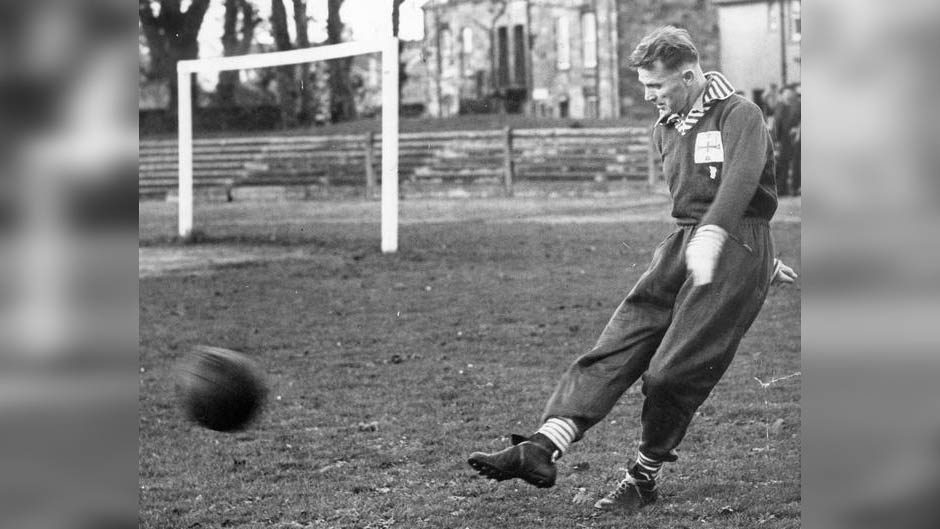 Peter Doherty led Northern Ireland to their first-ever major tournament making it all the way to the 1958 World Cup quarter-finals in Sweden.

During his playing days the great Peter Doherty was held in such high esteem by his peers that he was dubbed the ‘genius of geniuses’ by the legendary England international Len Shackleton.

Unfortunately due to war he probably never got to realise his true potential but he will always be regarded as one of the great players of his generation.

A native of Magherafelt, Doherty made his name with Glentoran, scoring 35 goals in just 61 games for the east Belfast outfit before making a £2,000 move to Blackpool as a 19-year-old in 1933.

Two years later he made his full international debut as Northern Ireland went down 2-1 at Goodison Park to England in the British Home Championship.

A swift, elusive inside forward with tremendous stamina and perfect balance, Doherty made the switch to Manchester City in February 1936 and in his first full season with the club he scored 30 goals as he helped them win their first ever league title.

Just as he was reaching his prime, the Second World War broke out and although he joined the RAF he continued to play for City in wartime games throughout the hostilities.

When football resumed Doherty, now with Derby County, won the FA Cup in 1946, scoring in the final against Charlton Athletic.

On the international front he continued playing for Northern Ireland until he was 37 and at club level he played his final match for Doncaster Rovers at the age of 40.

Doherty became the first official manager of Northern Ireland when appointed in 1951 and after an indifferent start to his role he famously led the team to the 1958 World Cup finals in Sweden where – with a side which included Harry Gregg, Danny Blanchflower, Billy Bingham, Jimmy McIlroy, Peter McParland and co. - they reached the last eight.

As a manager, he proved to be a thinker, using inventive coaching techniques. Not surprisingly, he emphasised ball practice and instead of endless laps of the pitch and he introduced volley-ball ‘to promote jumping, timing and judgement’.

In the 1960s and ‘70s he had scouting posts with Aston Villa and Liverpool before retiring from the game.