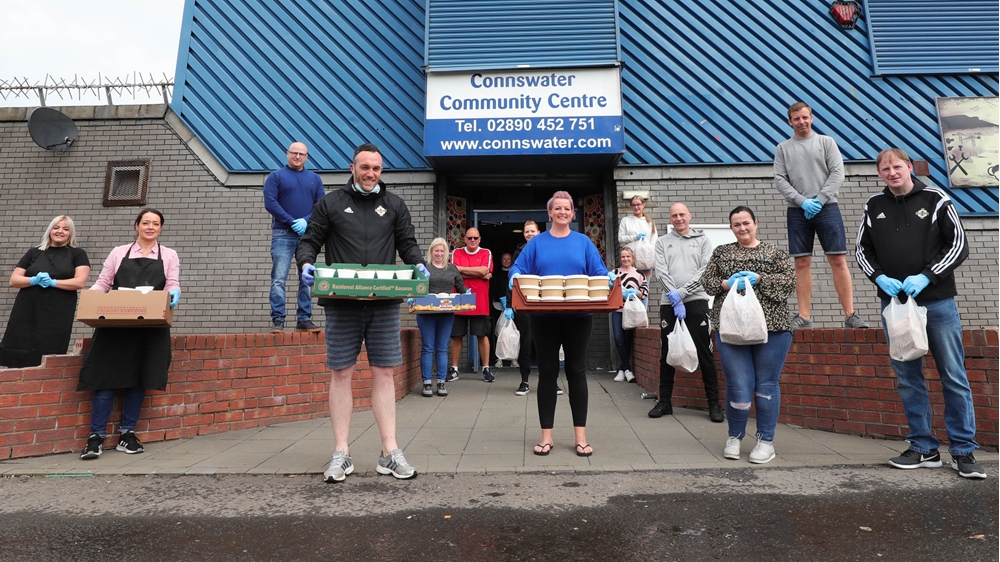 Irish FA staff, along with a representative from the Amalgamation of Official Northern Ireland Supporters’ Clubs, visited a Belfast community centre this week to see some of the inspiring voluntary work being carried out during the COVID-19 crisis.

A dedicated team there are delivering more than 1,000 meals every week to the elderly and isolated right across the east of the city.

“It was impressive to see what they're doing to serve the community and to help them prepare/deliver food to elderly residents in East Belfast. The volunteers are in the centre from 8am in the morning preparing the food and it is a real team effort,” said Michael Boyd.

Praising work being carried out, Gary McAllister added: “Connor is a member of Spirit of ‘82 NISC and I've been following with interest the voluntary work that he and others have been doing in their local area since the outbreak of the pandemic.

“Eight local girls and women help to prepare the food and they are ably assisted by a professional chef.  Thirty delivery drivers bring the food to the homes of those who have had their names submitted by family, neighbours, carers and the council. The service is entirely free and is sustained by donations of money and food by local businesses and individuals.

“It was a really humbling experience going along to lend a hand to the volunteers who are very dedicated to their work.

“Football plays a massive role in people's lives and I think it's important that the football community in Northern Ireland does whatever it can to help out during the ongoing crisis.”