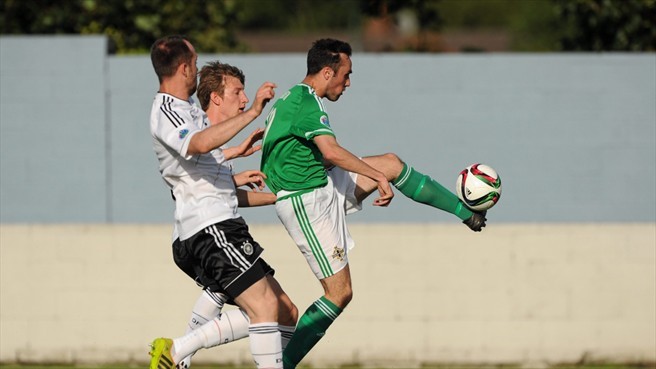 After a rather nervous start the Eastern Region took an unexpected lead on 12 minutes when Willie Armstrong's perfectly weighted pass found Richard Thompson and from the edge of the penalty area he calmly lobbed the Wurttemberg goalkeeper, Hauser, who could do nothing to stop the excellent finish.

Rocked by this set back the Germans found themselves two down two minutes later when Thompson pounced on a sloppy clearance to help himself to his and Northern Ireland's second of the night with an equally stylish strike as his first effort.

Wurttemberg steadily worked their way back into the game and again had most of the play for the remainder of the first half without really threating Neeson's goal, their best effort coming from Benjamin Sturm when his curling left foot effort was deflected wide of Neeson's goal for a corner on 29 minutes.

The most significant event of the first half after Thompson's double strike was the sending off of Colm Curtis after 36 minutes when he was dismissed for a second cautionable offence.

The Russian referee had earlier booked Curtis for kicking the ball away and after a mazy run into the box the referee adjudged Curtis to have dived and he was booked for simulation.

Despite this setback the Eastern Region held on until half time with their two goal lead intact.

The second half was always going to be an almighty struggle, but the 10 men from Northern Ireland worked tirelessly to block every effort and frustrate the Germans and they did this superbly throughout the second half.

In fact they came close to putting the match out of reach for Wurttemberg early in the second half with an excellent passage of play when Willie Armstong's clearance was controlled on the halfway line by Stephen Murray who slipped the ball through the legs of the German defender and raced clear towards the Wurttemberg goal.

Murray's square pass from the right side of the penalty area was met by Buckley who found Cooper in space in the box, but the teenager shot just wide.

Neeson commanded his area well and made several excellent saves and interceptions. He was also helped out by the woodwork when Daniel Schactschneider's strike looked destined to make the net bulge, but instead rebounded off the the post and was scrambled out for a corner kick midway through the second half.

The Wurttemberg comeback started in the 79th minute when a dubious penalty was awarded against Neeson, who was cautioned, for his challenge on the German striker. Manuel Pflumm converted the spot kick to get the Germans back in the game.

A minute later Northern Ireland (Eastern Region) had a penalty claim of their own when Kyle Buckley was upended in the box, but the referee waved play on and this led to another Wurttemberg attack when they levelled the game through Mario Marinic who converted at the back post.

With concerns growing about the fatigue of the players and still 10 minutes to play the Eastern Region did fantastically well to hang on for a well deserved point.

Speaking after the game, Eastern Region manager Harry McConkey said "Before the match I would probably have settled for a point and when we had to play for nearly an hour with 10 men against a quality side like Wurttemberg I am happy to have taken something from the game.

"In final tournaments it's so important not to lose your first game and we haven't lost, so I'm happy that we still have all to play for."

He continued: "the players worked so hard tonight and deserve their point, I'm very proud of each and every one of them for their attitude and commitment.

"I know that Colm (Curtis) will be very disappointed about the sending off and the added pressure that put on the team. I do think that he was fouled in the box, but he went down a bit theatrically and the referee saw this as a dive.

"We'll assess the injuries and maybe bring in some fresh legs for the next game against Zagreb on Sunday." 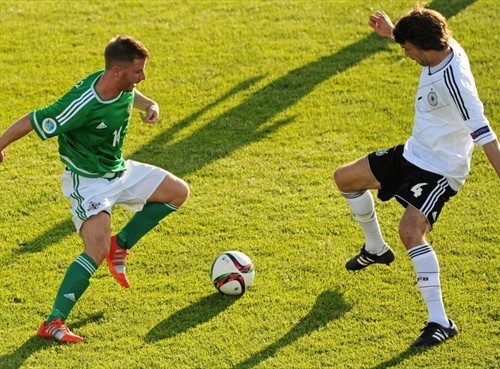 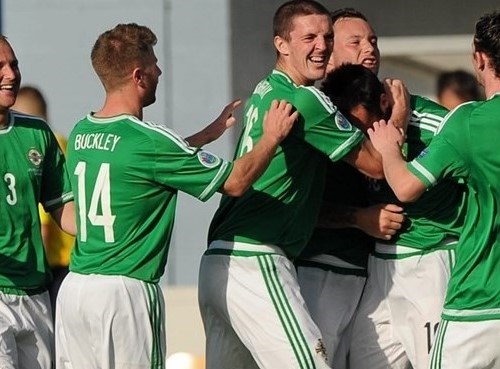 Richard Thompson celebrates his second goal with his team-mates 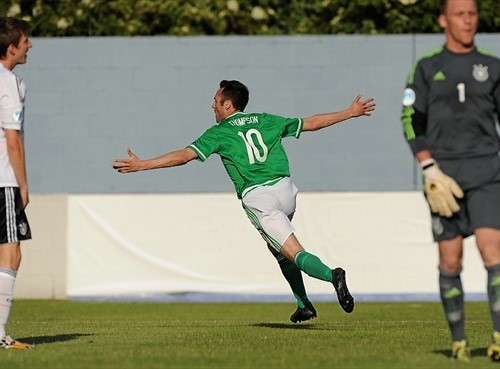