Northern Ireland Team ‘In A Different League’ With Mccoy’S 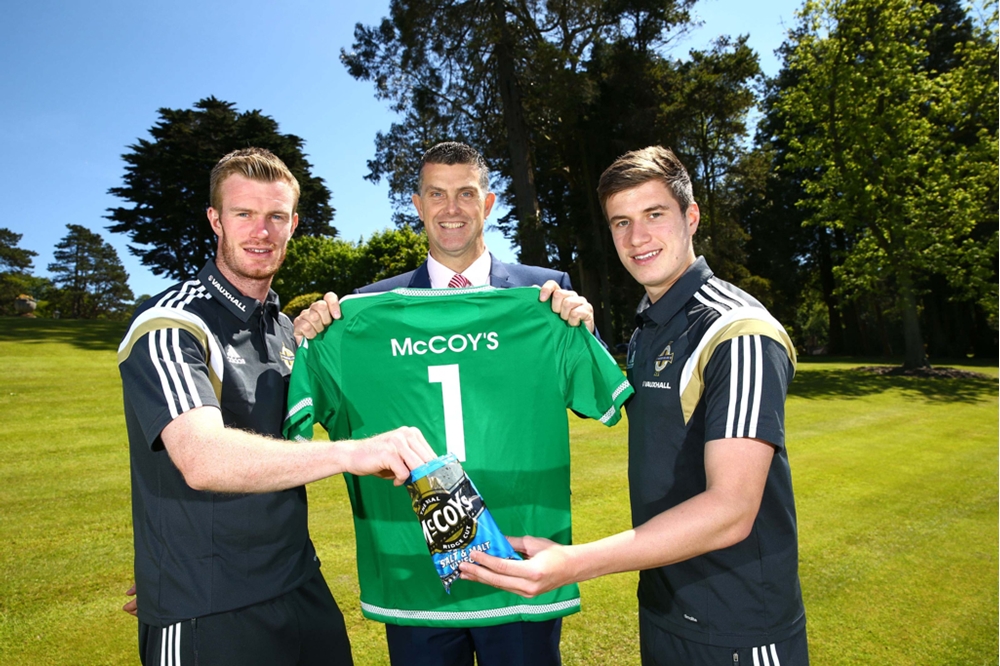 The popular ‘man crisp’ has been signed up by the Irish Football Association and as part of the deal will provide a regular supply of McCoy’s Crisps to Michael O’Neill’s team who are currently in a strong position to qualify for the European Championships which take place in France next summer.

Northern Ireland currently occupy second place in Group F with 13 points from six games, just one point behind Romania and two points ahead of Hungary in what has become a three-way battle for the two automatic qualifying places on offer.

Ricky Watts, Business Account Manager (NI) for McCoy’s manufacturer KP Snacks, hopes that with the help of McCoy’s, the boys in green can bag a place from their remaining games against the Faroe Islands and Hungary in September, with crunch ties against Greece and Finland in October.

“We are delighted to announce our support for the Irish FA and the Northern Ireland international football team and we’ll be cheering the lads on to qualify for Euro 2016,” said Ricky.  We haven’t qualified for a major tournament in a long time and it would be a fantastic achievement if the team could secure the points they need from the remaining four matches.  It’ll give the whole country a boost and a lot of us a wee holiday in France next summer,” he added.

“Northern Ireland has always been a key market for McCoy’s, and as you would expect from a brand referred to as ‘the man crisp’, football is a very important arena in which we want to be involved - so we’re extremely proud to combine both of these elements and get behind our national football team in their European Championship campaign.  “It’s going to be tough and our nerves will be wrecked but I’m sure we can do it,” concluded Ricky.

Oonagh O’Reilly, IFA Director of Sales and Marketing, added:  “I am delighted to welcome McCoy’s Crisps on board as the Irish FA’s Official Crisp Partner.  This is an exciting time for the Irish FA which will create opportunities for new commercial partners such as McCoy’s Crisps.  We look forward to working closely with the brand and supporting their plans to leverage our relationship.”

To celebrate the partnership, McCoy’s will be providing product to the team and at matches, while crisp lovers will be given the opportunity to win signed Northern Ireland Jerseys, match tickets for crucial home qualifying games against Hungary and Greece, as well as opportunities to attend a team training session.

Earlier this year, McCoy’s was also revealed as the Official Crisp Partner of the Football League, the oldest league in world football, founded in 1888.  The brand also launched its ‘In a Different League’ campaign in Northern Ireland with a range of bespoke activities including the annual McCoy’s NI Pub Quiz, the search to find Northern Ireland’s brainiest pub team, which this ‘season’ will have a football theme.