Eastern Region So Close To Bronze 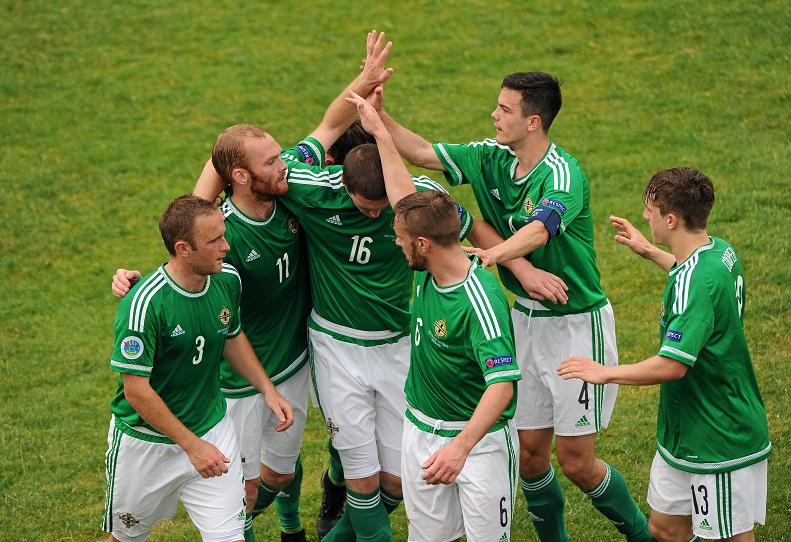 Having battled tirelessly from the first whistle of the opening match against Wurttemberg last Friday to the final whistle at Tolka Park this afternoon Harry McConkey and the Northern Irish lads got their just rewards and signed off with a victory against the Poles.  The Eastern Region started the game really well and caused all sorts of problems for the Polish defence in the first 4 minutes.  Colum Curtis stung the palms of the Dolnoslaski keeper on 3 minutes who could only parry the viciously struck shot from the edge of the penalty area.  The ball fell to Colm O’Riordan and the Immaculata man saw his shot well saved.  From the resulting corner kick Richard Thompson could have added to his tally for the tournament, but his effort was again well saved by Krawczyk after good work again from both Curtis and O’Riordan.

Despite the excellent start to the game the Eastern Region saw themselves a goal behind in the 5th minute following a swift counter attack and great solo effort from Damian Niedojad who kept his nerve to slot past Neeson.

The Eastern Region responded well and created chance after chance with playmaker Marcus Dallas instrumental showing the full repertoire of his passing ability. Cooper, Thompson and O’Riordan all came close to levelling the game before half time.

Eastern Region started the second half brightly with Joel Cooper a constant thorn in the side of the Polish defence.  Thompson’s glancing header in the 47th minute flashed wide after an excellent angled delivery from skipper, Scott McMillan.  Dolnoslaski reminded the Eastern Region of their counter attacking abilities after 5 minutes of the second half and had Neeson to thank for an excellent stop from Maciejewski.

Northern Ireland always looked the more likely to score though and the equaliser came after 55 minutes.  From a teasing left foot cross delivered by Willie Armstrong that was inviting someone to head it home, Colm O’Riordan duly obliged making no mistake with his firm downward header.

The Northern Irish lads were relentless in their pursuit of more goals and Joel Cooper continued to probe the Polish defence.  It was following a foul on Cooper on 58 minutes that the Eastern Region’s next chance came.  Curtis delivered the free kick and Gareth Ringland must have felt he had put his team ahead when he connected with a header that the Polish keeper did amazingly well to keep out.

Murray replaced Thompson just after the hour mark and came agonisingly close to giving the Eastern Region the lead in the 79th minute.  The impressive, battling of O’Riordan in midfield won possession for the team from Northern Ireland and passed to the feet of Murray who showed good pace and composure to get a his shot away only to be denied by the fingertips of Krawczyk.

The Eastern Region finally took the lead after 85 minutes when O’Riordan pounced in the Polish penalty area after excellent work again from Cooper.

The Northern Irish lads pressed and pressed for another goal that would have seen them lift the bronze medals, but sadly it was not to be,  Joel Cooper coming closest in the final minutes when his shot on the turn flashed over the cross bar.

Speaking after the game Harry McConkey reflected on the game and the tournament.

He said, “I’m absolutely delighted that the boys got the result they deserved today.  We have played some very good football throughout the tournament and when you consider that we held the German’s to a 2-2 draw playing with 10 men for almost an hour, lost to a very strong Zagreb team who will now be contesting the final on Saturday and got a win today against a very strong footballing nation (Poland) that would tell you that we have made some excellent progress.”

On the tournament itself McConkey added, “The hosts have been absolutely fantastic.  From the hotel facilities to the training grounds to the match stadia it’s been a first class experience for my players.  It has been a wonderful football environment and that makes the players a lot happier which ultimately leads to them performing much better.”

“It has been a very friendly tournament.  The camaraderie amongst the players has been great and I’ve enjoyed meeting the other Managers and talking to them about their various cultures. It has been a great learning experience for us all.” 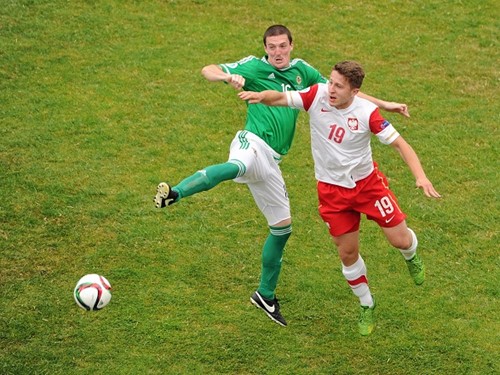 Dan McMurray challenges for the ball. 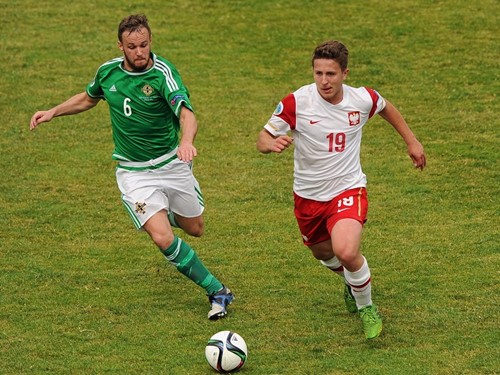 Marcus Dallas challenges for the ball. 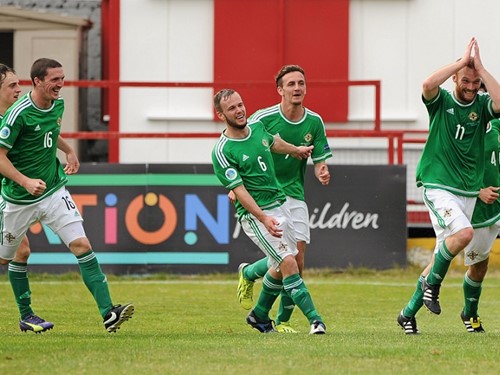 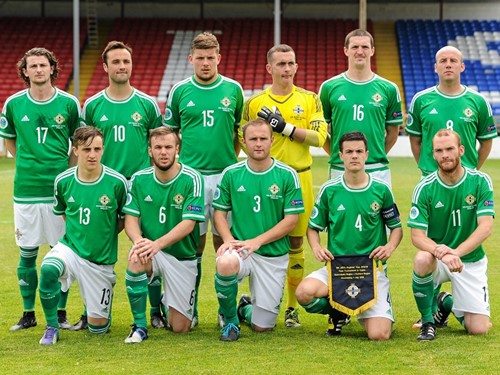