The iconic annual celebration of football which was first launched in 1881, and is now the fourth-oldest national cup competition in the world, has won the sponsorship of another iconic name: Tennent’s Lager.

The agreement marks a further extension of the partnership between the Irish Football Association and leading Northern Ireland drinks company, Tennent’s NI.

The new official sponsor was formally introduced at the Round Five draw for what will now be known as the Tennent’s Irish Cup.

Delighted to have this opportunity to further support local football across Northern Ireland, Brian Beattie, Marketing Director at Tennent’s NI, said, “This new five-year partnership reinforces our brand’s commitment to football - and its many fans - at both local and international level.

“It’s a refreshing and exciting opportunity for Tennent’s Lager to engage with the sport right across Northern Ireland and show our long-standing and loyal consumers that we share their passion.

Football is, famously, one of the most sociable of team sports so it’s a natural link for Tennent’s Lager which has always been at the heart of sporting and community sociability in Northern Ireland.

“With Round 5 matches of the Tennent’s Irish Cup taking place on Saturday 9th January, this will be a great start to 2016 – another great year for football in Northern Ireland!”

“I am delighted that the Irish Cup has a new sponsor, especially a brand as prestigious as Tennent’s Lager. The Tennent’s Irish Cup is the centrepiece of our local game and with this new partnership I look forward to seeing the competition go from strength to strength in the coming seasons.”

The draw was conducted by two-time winners Michael Halliday and Brian Strain.

There are three all-premiership ties with Linfield hosting Ballymena United, Warrenpoint  travelling to Dungannon Swifts and Coleraine taking on Ballinamallard. 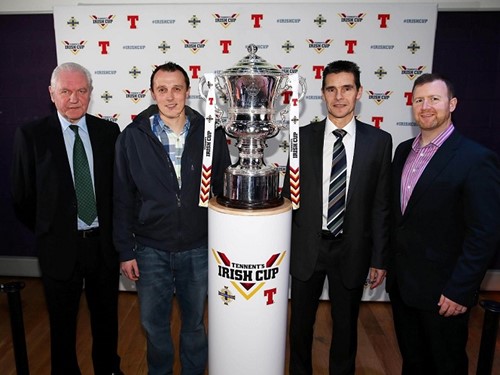