Fans To Vote For Northern Ireland Player Of The Year 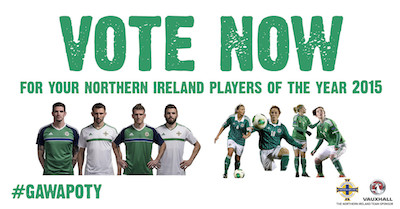 The Irish FA and Vauxhall have launched the inaugural Vauxhall Northern Ireland Men’s and Women’s Player of the Year award to celebrate an outstanding 2015 for Michael O’Neill and his team.

After voting on the Vauxhall Northern Twitter and Facebook pages over the past week the top four men and women’s players have been chosen by the fans.

Fans will be able decide on their Vauxhall Northern Ireland Men’s and Women’s Player of the Year by voting on vauxhallfootball.co.uk, voting closes at midnight on December 31.

The winners will be announced in March when the team start their preparations for next summer’s tournament.

Andrew Curley, Head of Sponsorship and Events at Vauxhall, said: “The fans have been at the heart of the team’s journey throughout the year and it is only right that they have their say on who is their player of the year.

“It will be a tough choice as every player has been terrific in helping the team be so successful over the past 12 months.

“The side have done remarkably well and we’re looking forward to supporting Michael’s team in France along with the green and white army,” he added.

Follow @VauxhallNI for all the latest Northern Ireland news and events ahead of Euro 2016.

Voting for the inaugural Vauxhall Northern Ireland Player of the Year for both men and women will take place on vauxhallfootball.co.uk from December 22 until midnight on December 31.