Jordan Jones opened his account for the season in style when he rifled home an injury-time volley to give Kilmarnock a narrow 1-0 Scottish Cup win over League Two side Dumbarton at the weekend.

The 28-year-old winger, who is on loan from Wigan Athletic, was used from the bench just before the hour mark and hit the only goal of the game to set up a fifth-round tie away to Dundee United next month.

Also finding the back of the net was Shane Ferguson who made it two in two games as Rotherham United picked up a valuable point in their Championship draw at Watford, for whom Craig Cathcart was making his 250th appearance.

Winger Niall McGinn chalked up his first goal since returning to the Irish League when he opened the scoring for Glentoran who secured all three points in a 3-1 victory at Newry City in the Danske Bank Premiership. 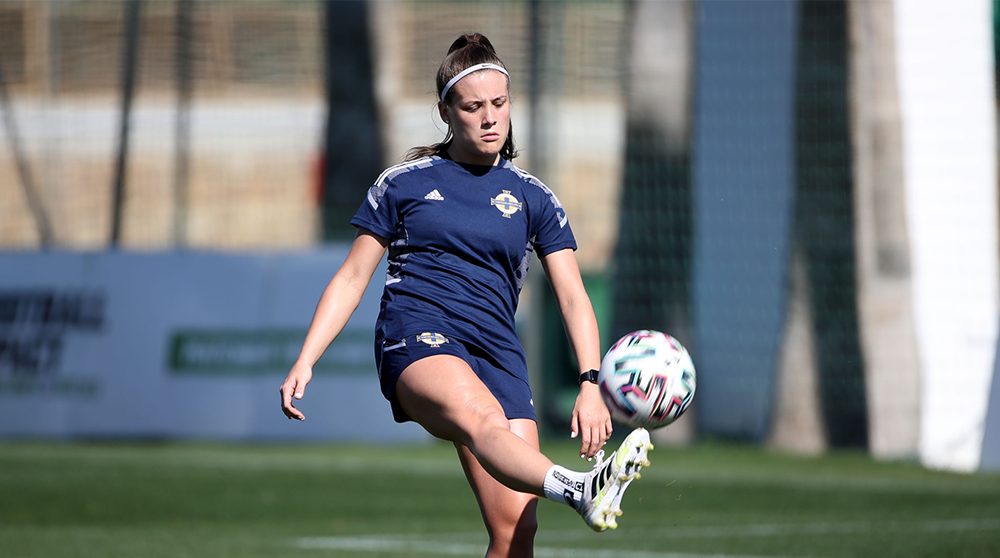 In the Scottish Women’s Premier League Megan Bell (above) made it two in two games after coming on as a late substitute in Rangers' emphatic 7-0 success at Motherwell. The result sees the 'Gers remain in third place in the table seven points behind leaders Glasgow City.

“It was a great performance from the team,” Megan told irishfa.com. “It was great for the team to score seven and I’m delighted I could play a part in that with a goal.

“I will get my head down again and work hard this week in training."

“I have to be patient and bide my time,” she added, “as I also understand that I’ve been out for a long time and I have to work my way back into the team.”

In the Women’s Super League in England, Reading goalkeeper Jackie Burns saved a 40th minute spot-kick against Manchester United. It was her second penalty save of the season. United still managed to chalk up a 1-0 success thanks to an 87th-minute goal from Rachel Williams.

Elsewhere teenage midfielder Isaac Price was an unused substitute for Everton who dropped to 19th place in the Premier League following their 2-0 reverse at fellow strugglers West Ham. Jamal Lewis also had to watch from the subs' bench as Newcastle United picked up a point in a scoreless draw at Crystal Palace.

In the Championship, Trai Hume, Daniel Ballard and Corry Evans all started Sunderland’s 2-0 win at home to Paddy McNair’s Middlesbrough, however 31-year-old Evans was forced to leave the action after only 11 minutes after picking up a knee injury.

Finally, Dion Charles provided the assist for Bolton Wanderers’ consolation goal in the 2-1 defeat at Derby County in League One.