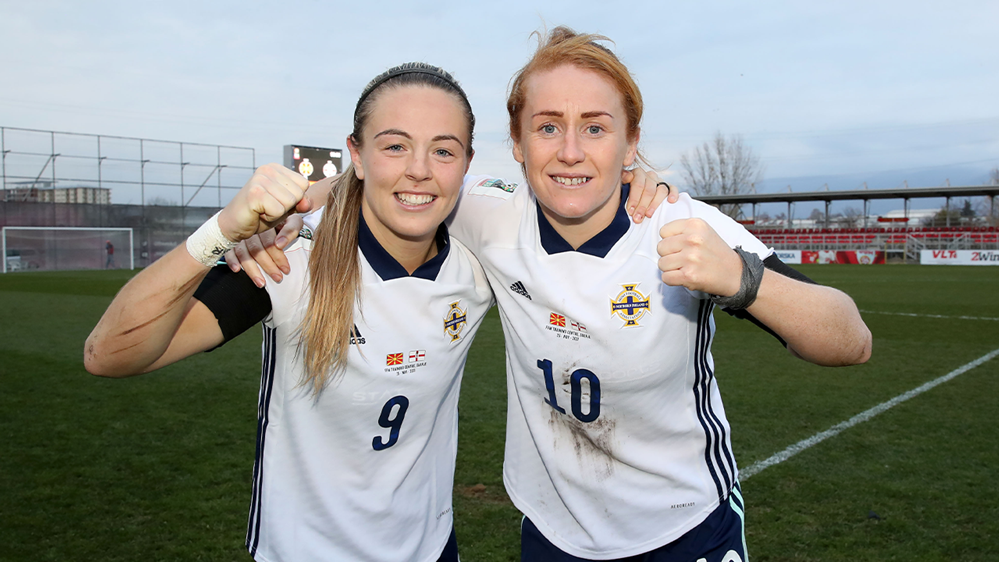 After booking a place at UEFA Women’s Euro 2022 thanks to their thrilling play-off success against Ukraine, the Northern Ireland senior women’s team switched their focus to World Cup qualifiers in the latter part of 2021.

Captain Marissa Callaghan opened the scoring with a neat lob, while Rachel Furness increased the lead with a powerful header.

Northern Ireland went 3-0 up when Furness struck the post with a free-kick and Emily Wilson was on hand to hammer in the rebound. It was her first senior international goal.

Lauren Wade grabbed goal number four when she smashed the ball into the net after a Kerry Beattie shot was blocked.

Days later another success followed – this time against Latvia.

The senior women’s team marked their return to the National Football Stadium at Windsor Park with a scintillating performance against the Latvians.

They had not played at the stadium for nine years but they looked at home when registering a 4-0 win for the second game running.

Goals from Louise McDaniel, Kirsty McGuinness, Callaghan and Furness (penalty) were enough to secure the win in front of more than 4000 fans.

Northern Ireland created several chances during the 90-plus minutes, just as they did in the win over Luxembourg in their opening European Qualifying Group D fixture, and they could have scored more than four.

At the end of September plans for Northern Ireland Women to train full time in preparation for UEFA Women’s Euro 2022 in England next summer were presented to MLAs and Ministers at Stormont.

At a reception event entitled A New Dream, hosted by UUP MLA Mike Nesbitt, representatives from across the political spectrum gathered to meet members of Kenny Shiels’ squad and pledge their support for the team moving from their current part-time status to train on a full-time basis from January 2022.

Northern Ireland’s two Women’s World Cup qualifiers in October were a completely different proposition from the games in September. They faced England, the top seeds in the group, at Wembley and then second seeds Austria at Seaview a few days later.

Northern Ireland battled bravely against England at Wembley. A backs to the wall performance saw them keep the Lionesses at bay for more than an hour, however a hat-trick from substitute Beth Mead and a goal from another substitute, Bethany England, gave the hosts a deserved 4-0 win.

They showed plenty of heart, courage and commitment throughout, however England’s superior fitness and power told in the end.

Arguably Shiels’ team are battling it out with Austria for second place in the group, which would trigger a series of play-off matches that could lead to qualification for the World Cup finals in Australia and New Zealand in 2023.

In the first of their battles with the Austrians, which came just days after the visit to Wembley, they produced a superb performance to draw 2-2 in Belfast.

And it could have been even better. Shiels’ side were leading 2-1 after 90 minutes but the Austrians scored deep into added time to secure a point.

But the visitors piled on the pressure towards the end and grabbed the leveller.

Two minutes into added time Austria captain Carina Wenninger launched the ball into the area and substitute Stefanie Enzinger was on hand to head the ball over Northern Ireland keeper Jackie Burns into the net. It was a real sucker punch.

With goal difference potentially being a key factor in the group, Northern Ireland went on a scoring spree in November. In two qualifiers against North Macedonia they notched 20 goals without reply.

The senior women’s team were relentless in the first instalment of their World Cup qualifiers double header against the Macedonians.

Kenny Shiels’ side were simply superb as they claimed another three points with an 11-0 victory in Skopje.

It was the Northern Ireland senior women’s team’s biggest ever victory home or away – and Furness’s hat-trick meant she equalled David Healy’s goalscoring record for Northern Ireland on bringing her tally to 36 goals for her country.

In the match McKenna and Holloway grabbed their first senior international goals, while Rachel McLaren made her senior debut after replacing Crusaders Strikers team-mate Julie Nelson at half-time.

Northern Ireland were in cruise control once again when the Macedonians visited Seaview a few days later.

In the second game of the WWCQ double header they rattled nine goals past North Macedonia in front of 2600 fans in north Belfast.

Kirsty McGuinness grabbed a hat-trick, Furness notched a record-breaking double, Holloway also scored two and Magill and Kerry Beattie were on target as well in the emphatic win. Beattie’s goal was her first at senior international level.

Furness’s brace saw her take her goalscoring tally to 38, a new record for a Northern Ireland player at senior international level.

Furness was presented with the BBC award by Liverpool manager Jurgen Klopp at the Merseyside club’s training ground. He congratulated her and the Northern Ireland team on their achievements this year and wished them success for the UEFA Women’s Euro 2022 in England.