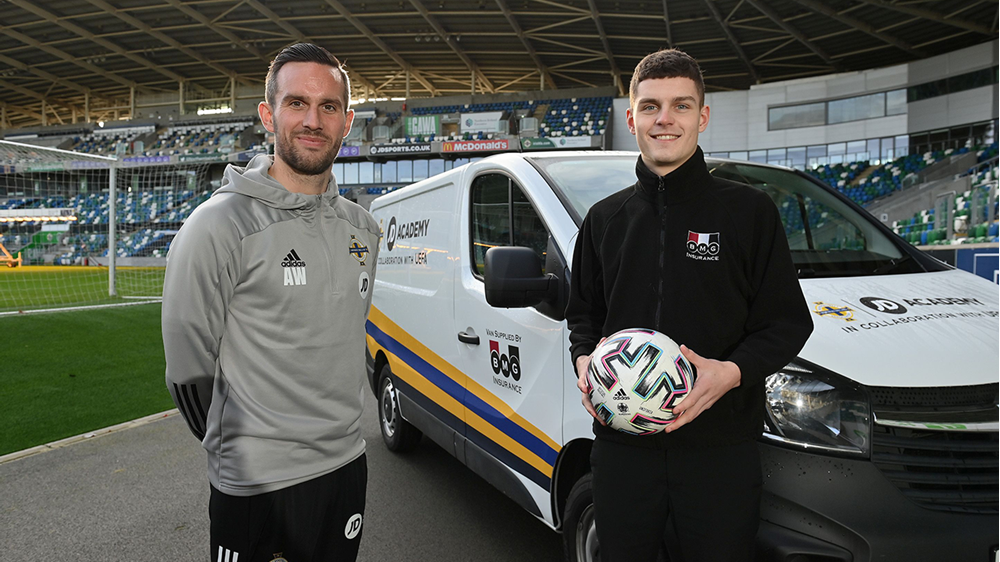 Above: Andy Waterworth, head of the Irish FA JD Academy in collaboration with UEFA, and Craig Taylor from BMG Insurance with the new van.

BMG Insurance has become an official partner of the Irish FA JD Academy in collaboration with UEFA.

Through the partnership the insurance company, which has branches in Belfast, Portadown and Enniskillen, has provided a van for daily use at the academy.

Ciaran McGurgan, Sales Director with BMG Insurance, said: “We are proud to have partnered with the Irish FA JD Academy and been able to support it.

“The professionalism and development within the academy is world class and a real credit to the Irish Football Association with the high quality coaching staff and mentors they have. There is a bright future ahead within football in Northern Ireland and we are delighted to be associated with the academy.”

Andy Waterworth, head of the Irish FA JD Academy in collaboration with UEFA, said he was delighted with the support BMG has given the academy.

He pointed out: “Ciaran (McGurgan) is really passionate about football and in particular the development of players.

“The van will be used across all of our elite youth player development programmes, including the academy. It will support the moving of equipment and kit and help with everyday life at the academy and the JD-sponsored National Performance Programme.

“We have three national centres across Northern Ireland with around 60 players and a full-time academy of 35 boys, so you can only imagine the crucial role the van plays logistically.”

Fully endorsed by UEFA and based at Ulster University Jordanstown, the academy is Northern Ireland’s first - and only - full-time residential academy for young footballers. It is focused on developing emerging talent at school years 11 and 12 (U15 and U16) and its main objective is to produce better players through a mixture of sporting, school and life skills education.

The academy head added: “I would like to extend my thanks on behalf of the Irish FA to BMG for its support. It is great to learn of their passion to support football in Northern Ireland and in particular our performance pathways.”