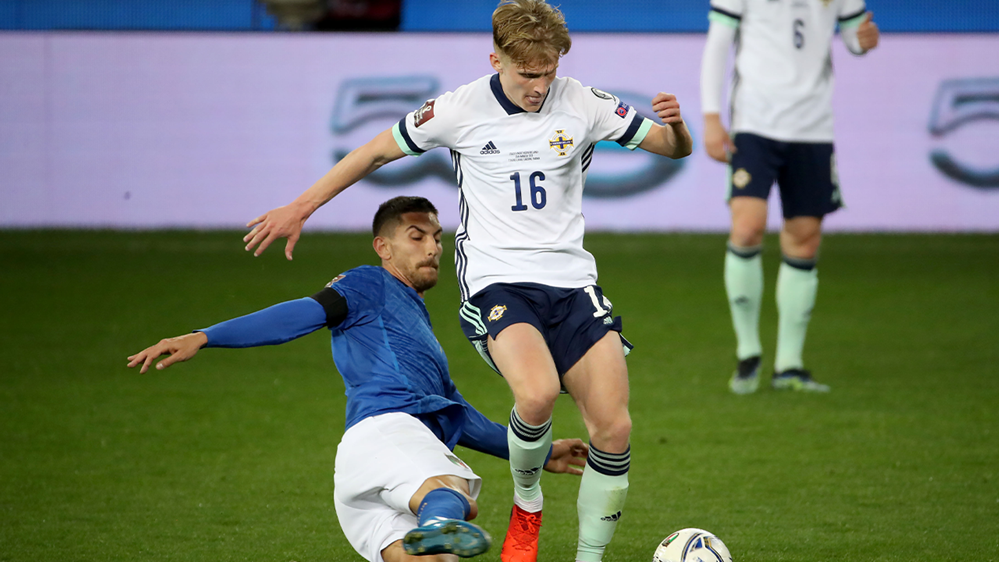 The focus during 2021 for Northern Ireland manager Ian Baraclough and his players was qualification for next year’s FIFA World Cup in Qatar.

It was a topsy-turvy campaign disrupted by Covid and injuries, however there were lots of positives to be found along the way, not least the introduction of a handful of younger players to the senior squad who took it in their stride.

The goal of either automatic qualification or a play-off spot was not reached, however if three 0-0 draws at home had been turned into victories then it could have been a whole different story in European Qualifying Group C where Switzerland eventually topped the table, European champions Italy finished second and Northern Ireland third. Northern Ireland’s other opponents in the group were Bulgaria and Lithuania.

Game one of eight in Group C for the boys in green and white saw them face the Italians, the group’s top seeds, in Parma in March – and they lost 2-0.

The four-times world champions, with their attacking verve and slick passing, did the damage in the first half with clinical finishes from Domenico Berardi and Ciro Immobile.

However, it was not all one-way traffic as Northern Ireland had their chances in the second half at the Stadio Ennio Tardini.

Steven Davis, who equalled Peter Shilton's British international caps record of 125 on the night, was influential in the second half with some neat, incisive passing.

Davis let fly in the 83rd minute, although his strike was comfortably dealt with by Italian keeper Gianluigi Donnarumma. And towards the end the Northern Ireland captain produced a neat reverse pass to the onrushing Paddy McNair who blasted over the top.

Sandwiched in between that game and their second WCQ was a challenge match against United States of America in Belfast.

Goals from strikers Giovanni Reyna and Christian Pulisic (penalty) secured a 2-1 victory for the visitors, with Northern Ireland pulling one back late on thanks to a superb strike from substitute Niall McGinn.

The game was the first meeting between the two countries at senior international level and it was a pretty lively encounter.

Baraclough’s boys aimed to bounce back in their second World Cup 2022 qualifier - against fourth seeds Bulgaria - but the game at the National Football Stadium at Windsor Park ended scoreless.

Northern Ireland enjoyed the bulk of the possession and created enough opportunities in the 90 minutes to grab all three points, however they could not find a way past Bulgarian keeper Daniel Naumov.

Stuart Dallas hit the woodwork and Gavin Whyte forced an excellent save out of Naumov as the home team largely controlled proceedings.

But Northern Ireland keeper Bailey Peacock-Farrell, who had been a spectator for much of the game, produced a marvellous stop towards the end to keep the scoreline at 0-0.

Fittingly it was Northern Ireland captain Steven Davis, breaking the all-time British caps record with his 126th appearance for his country, who had the first effort on goal in the qualifier, however his shot was off target.

Northern Ireland warmed up for the six remaining qualifiers in the autumn of 2021 with two end of season friendlies against Malta and Euros-bound Ukraine. The game against the Maltese was staged in Austria at the end of May, while the Ukrainian city of Dnipro was the venue for the second match.