Furness penalty not enough in first of double-header 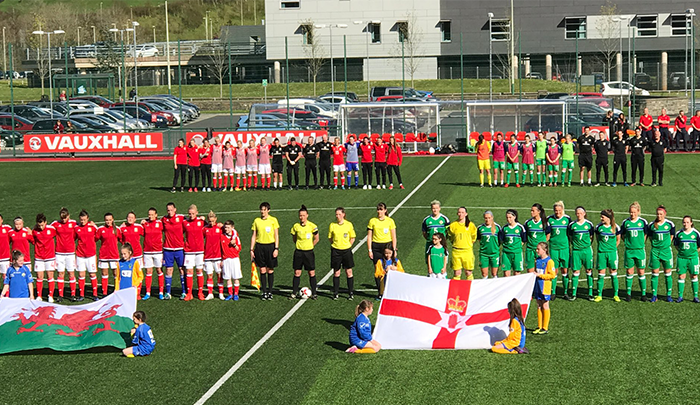 Northern Ireland Women fell to a 3-1 defeat in Wales today as they played the first of two matches in three days at the Centre For Sporting Excellence in Ystrad Mynach.

Wales opened the scoring on eight minutes as Georgia Evans sent a driving shot past goalkeeper Emma Higgins from inside the box.

Five minutes later and another Wales attack seen Kayleigh Green send her lob over the bar.

Northern Ireland grew into the game and Laura Rafferty came close to scoring on 18 minutes only to see Laura O’Sullivan make the save.

Rachel Furness equalized from the penalty spot on 28 minutes after Green handled the ball inside the box.

However, Jessica Fishlock, on her 100th cap for the Welsh, scored with a fantastic strike on 39 minutes to give Wales a 2-1 lead at going in at the break.

Northern Ireland will be disappointed as they conceded just three minutes into the second half when Hannah Miles played the ball out wide to Nadia Lawrence, who cut the ball across the goal for Natasha Harding to slot home.

Furness had a strike from distance hit the side netting on 62 minutes as Northern Ireland looked for a way back into the game.

Ten minutes later Wales had a penalty appeal turned down, with the home team players claiming there was a handball in the Northern Ireland penalty area. However, the referee waved play on.

The remaining minutes were played out without major threat from either side.

Northern Ireland and Wales meet again at the same venue this Friday, with kick-off at 11am.