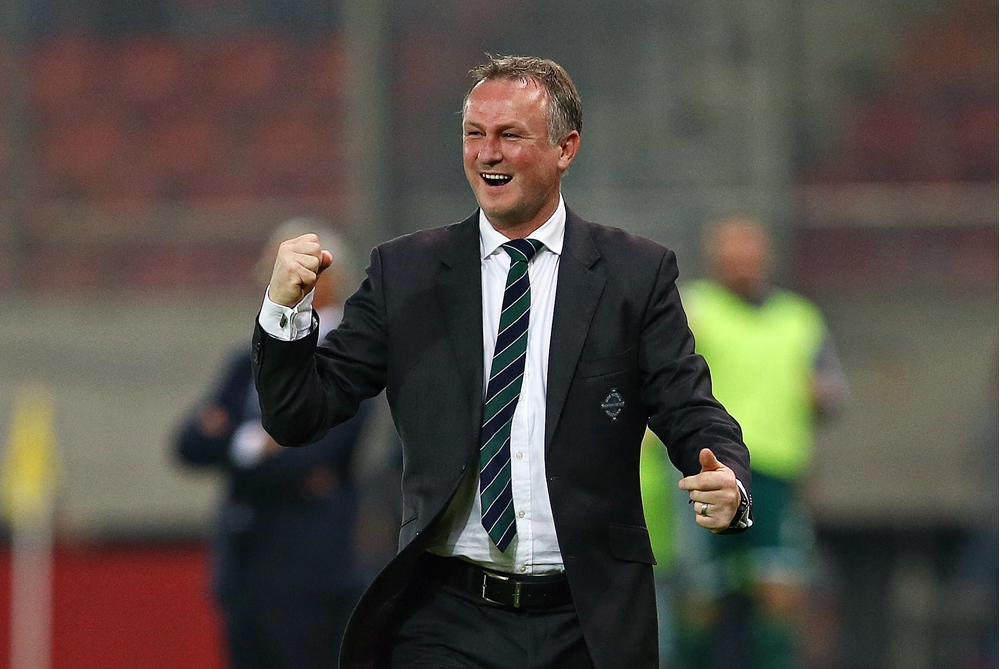 Michael O’Neill will go down in Northern Ireland footballing history as being only the third manager ever to lead the country to the Finals of a major tournament when they successfully qualified for EURO 2016.

He followed in the legendary footsteps of Peter Doherty and Billy Bingham who guided Northern Ireland to the Finals of the World Cup in 1958, 1982 and 1986 respectively.

O’Neill’s playing career began when he made his Irish league debut for Coleraine in a 4-0 Ulster Cup victory over Newry Town at the tender age of just 15 years and 155 days on 27th October 1984.

After three years with the Bannsiders, the then teenager earned a £100,000 move to First Division Newcastle United where he enjoyed two successful seasons before being sold to Scottish Premier League outfit Dundee United.

He was given his full international debut by Billy Bingham in a 3-2 friendly defeat to Greece in Athens in February 1988 and just over a year later he scored his first Northern Ireland goal in a 2-0 World Cup qualifying victory in Malta.

In total O’Neill won 31 caps for his country and scored four goals the undoubted highlight being the night he found the net twice in a memorable 5-3 European Championship win over Austria at a rain-soaked Windsor Park in November 1995.

The Portadown-born midfielder played for no fewer than 13 clubs during his 20-year playing career which included a successful stint in the Irish League with Glentoran helping them a league title in 2003.

Following his retirement from playing in 2004, he gained his first taste of managerial experience when he became assistant to Cowdenbeath manager, and a former teammate at Dundee United, Mixu Paatelainen.

Two years later he was appointed as manager of Brechin City before taking up the reigns at Shamrock Rovers in December 2008 where he named his former international colleague Jim Magilton as his number two.

During his three-year spell at Tallaght he led Rovers to two League titles and FAI Cup success as well as making history in 2011 by becoming the first manager to guide a League of Ireland side to the Group stages of the Europa League.

In February 2012, O’Neill succeeded Nigel Worthington as Northern Ireland boss with his first game in charge being a 3-0 friendly defeat to Norway at the National stadium.

Although results during his first qualifying campaign were indifferent there were still positive performances from the team especially the draw in Portugal and the home victory over Russia.

The draw for the qualifying stage of EURO 2016 saw Northern Ireland, who were fourth seeds, pitted in a fairly tough group alongside Greece, Hungary, Romania, Finland and the Faroe Islands

However, Michael O’Neill’s side got off to a magnificent start when, for the first time in their history, Northern Ireland took maximum points from their opening three matches.

The squad continued their excellent form throughout the qualifying campaign with qualification for the Finals of a major tournament for the first time in 30 years being confirmed with an impressive 3-1 victory at the National Stadium against Greece.

At EURO 2016, Northern Ireland progressed to the knockout stages of the tournament thanks mainly to a memorable 2-0 win over Ukraine in Lyon and despite being eliminated from the competition at the round-of-16 by Wales, O’Neill had cemented his name in Northern Ireland folklore.

In 2017 he was awarded the MBE by the Queen for his services to football and the community in Northern Ireland.

After the success achieved at the EURO’s, O’Neill led Northern Ireland to the brink of their first World Cup Finals in 32 years only to fall at the final hurdle following a controversial two-legged play-off defeat to Switzerland.

In November 2019, he left his post as national team manager in to take over the managerial hot seat at Championship side Stoke City before leaving the role in August 2022.

In December 2022, O’Neill was reappointed as Northern Ireland manager by the Irish Football Association on a five-year contract.