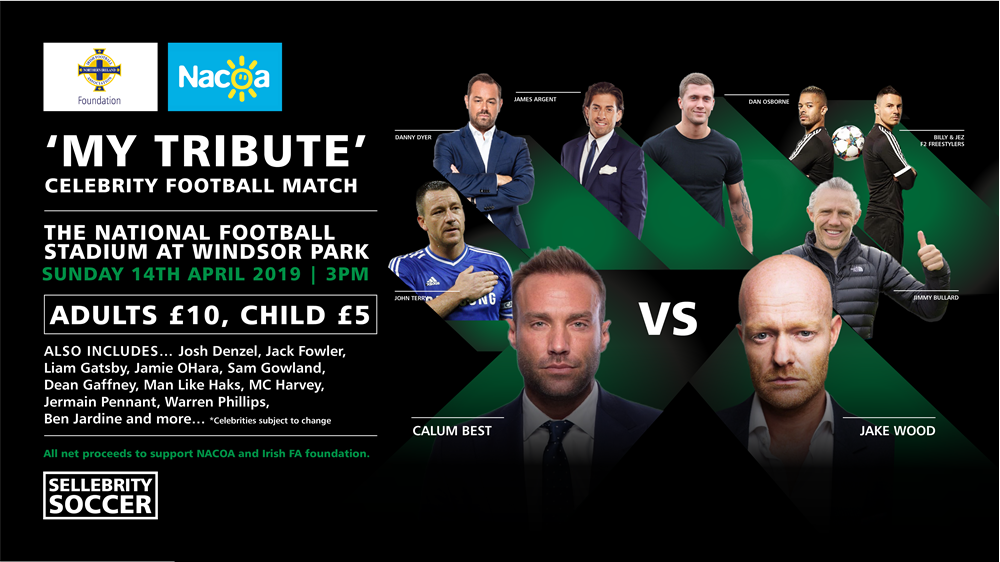 The National Football Stadium at Windsor Park is set to host a major celebrity football match in April.

Television personality Calum Best, son of legendary Northern Ireland and Manchester United player George Best, is one of the driving forces behind the ‘My Tribute’ game, which is due to be staged on Sunday 14 April at the stadium (3pm kick-off).

GET YOUR TICKETS HERE.

Best, who says the match will be a tribute to his late father,will captain one of the celebrity teams, while their opposition will have the actor Jake Wood as their skipper. Wood is best known for roles in EastEnders, Only Fools And Horses and Red Dwarf.

Ex-England and Chelsea Captain, John Terry, is also confirmed for the match, as is ex-Hull City, Wigan and now Soccer AM presenter Jimmy Bullard.

Other celebrities taking part include EastEnders stars Danny Dyer and Dean Gaffney, James Argent of The Only Way Is Essex (TOWIE) fame and Dan Osborne, who appeared on Celebrity Big Brother and TOWIE.

F2 Freestylers – freestyle football duo Jeremy Lynch and Billy Wingrove – have confirmed they will be putting in an appearance, while Warren Phillips, who was on our TV screens in Survival Of The Fittest last year, has also agreed to be there.

Sellebrity Soccer, which specialises in staging celebrity football matches throughout the UK and raises thousands of pounds for charity in doing so, is organising the game in association with the Irish FA. Tickets will be going on general sale tomorrow (Wednesday 20 February) at 10am via Ticketmaster.

Tickets for the ‘My Tribute’ celebrity football match will cost £10 per adult and £5 per child – plus booking fee - which you can PURCHASE HERE.