Washington on the scoresheet for QPR 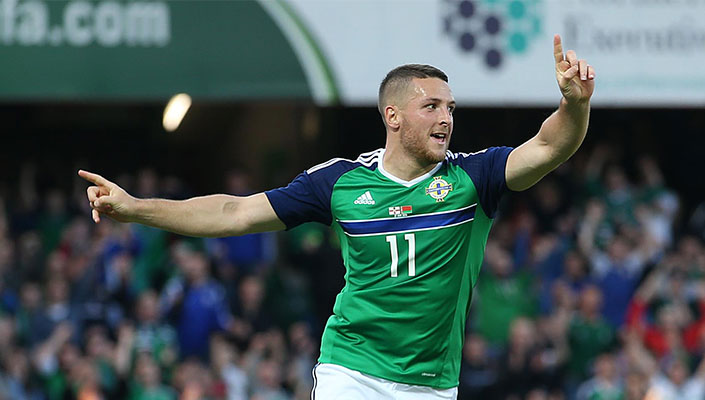 With Northern Ireland’s two World Cup qualifiers against San Marino and Germany on the horizon, striker Conor Washington picked the perfect time to score his first league goal of the season for Queens Park Rangers in the 2-1 win at Fulham at the weekend.

The 24-year-old, whose only goal in ten previous appearances for the west-London outfit this term came in a League Cup tie against Swindon Town back in August, opened the scoring for the Hoops on 20 minutes to set them on their way to their win at Fulham in 36 years.

In fact, it was a fairly good weekend for the majority of the 24-man squad named by Michael O’Neill for the upcoming World Cup matches with no fewer than twenty of them getting some game time with their clubs.

It was not so good though for Ross County striker Liam Boyce as he had to leave the field midway through the second-half of his side’s 2-0 home defeat to St Johnstone with suspected medial ligament damage.

“We will know more about Liam’s injury later on,” said County boss Jim McIntyre, “But we think it is a medial ligament injury and we are hoping he’s not out too long.”

Winger Jamie Ward seems to be settling in well to his new surroundings at Burton Albion as having got off the mark with a goal in midweek against QPR he set up the opener for Jackson Irvine in Saturday’s 2-0 home success over Cardiff City.

Meanwhile veteran defender Aaron Hughes’ season is up and running after he made his debut for Kerala Blasters in their opening league fixture in the Indian Super League, however, it ended in disappointment as Steve Coppell’s side lost 1-0 to North East United.

Back on the goalscoring front, there were only two other Northern Ireland players who managed to find the net at the weekend, Billy Kee hit what was his fifth goal for Accrington Stanley in their 2-1 reverse at Cambridge United while midfielder Ben Reeves scored in MK Dons 1-1 home draw with Stephen Robinson’s Oldham Athletic side.

Finally, former Cliftonville forward Rory Donnelly was sent-off in the final minute of Gillingham 2-0 League One defeat at Wimbledon while under-21 international Darren McKnight made his debut for Conference North outfit Stalybridge Celtic in their 2-1 FA Cup defeat to FC Halifax Town.