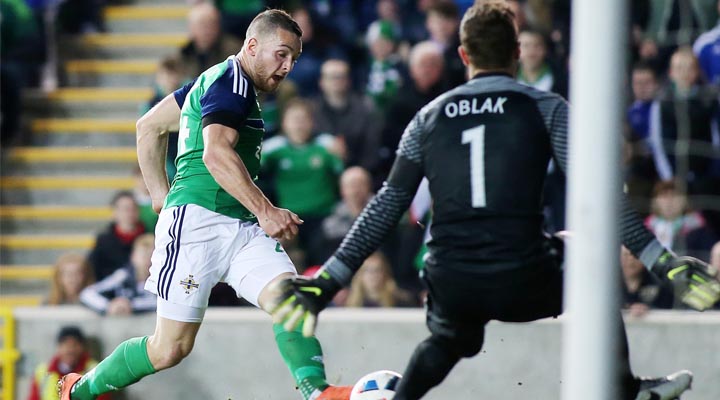 This will be a game that Michael O'Neill will be looking to win and win well, a real confidence booster before the infinitely more challenging task of facing Germany in Hanover next week.

San Marino can rightly be classed as the minnows of not only Group C but of world football in general. Ranked 201st by FIFA, they played their first official game as recently as 1990 and have only managed to end up on the winning side just once, a 1-0 defeat of Liechtenstein over 12 years ago.

But Northern Ireland will write them off at their peril. Pierangelo Manzaroli's side only lost by a single goal at home to Azerbaijan in their opening qualifier last month, a game they finished with ten men following Cristian Brolli's 52nd minute dismissal.

Other narrow defeats in recent times have come against Slovenia (2-0) and Lithuania (2-1), results that point to a slow but gradual improvement. However, these have been interspersed by trouncings against the likes of England, Switzerland and, in June, a ten-goal hammering in Croatia.

Players to Watch
By far and away the most experienced member of the squad is 40-year-old frontman Andy Selva. With over 70 caps to his name, the La Fiorita man is also his country's leading scorer on eight goals in an international career spanning 18 years. He also holds the distinction of grabbing the winner in that victory over Liechtenstein.

Partnering Selva up front is likely to be Matteo Vitaioli. The 26-year-old holds the distinction of scoring San Marino's last goal in the 2-1 defeat to Lithuania in September 2015, their first away goals in 14 years.

In defence, skipper Alessandro Della Valle will be hoping to keep Northern Ireland's forwards at bay. The 34-year-old comes with bags of senior experience, is San Marino's fourth all-time caps holder and scored their first goal in five years in the defeat to Poland back in 2013.

Then, in the middle of the park, Luca Tosi is beginning to establish himself, having won ten caps since making his debut just over two years ago. He could be joined by the more experienced pairing of Danilo Rinaldi and Maicol Berretti although Manzaroli might also rely on youth again in the form of Torino U19 man Filippo Berardi following his first cap last month in that narrow defeat to Azerbaijan.

Star of the Past
With only a recent and relatively undistinguished international history, San Marino legends are somewhat thin on the ground but it would be amiss of any reference to football in the landlocked microstate not to make reference to a certain Davide Gualtieri, arguably the most famous Sammarinese footballer of all-time.

Gualtieri secured his place in footballing folklore on 17th November 1993 when he stunned England with what remains the fastest goal in World Cup history after he made the most of a botched Stuart Pearce backpass to slot the ball past David Seaman with just 8.3 seconds of the game gone.

Previous Meetings
Northern Ireland and San Marino have only met on two previous occasions when, during the 2010 World Cup qualifiers, a 4-0 win in Belfast was followed up by a further three-goal victory in Serravalle.

The first game, in October 2008, saw David Healy and Grant McCann fire Nigel Worthington's side into a two-goal half-time lead before Kyle Lafferty and Steven Davis added to the tally after the break.

The return, less than four months later, brought goals for Gareth McAuley and McCann again with Chris Brunt wrapping the scoring up just after the hour.