McAuley & Ward score for their clubs 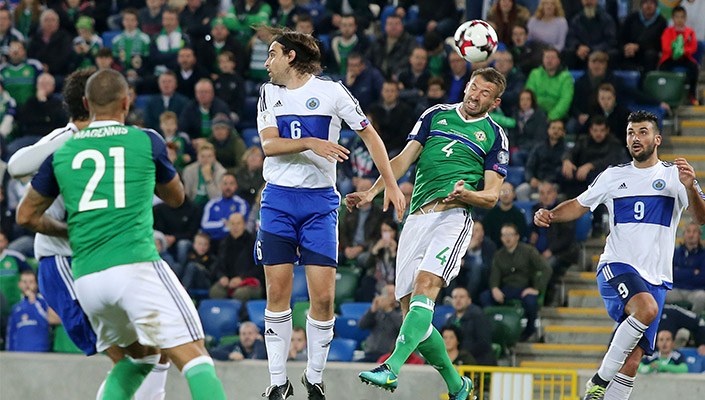 West Bromwich Albion defender Gareth McAuley struck home his third goal of the season at the weekend, however, it proved to be only a consolation for the Baggies who suffered a 2-1 Premier League defeat to Jurgen Klopp’s Liverpool at Anfield.

The 36-year-old pulled a goal back for Tony Pulis’ side nine minutes from time following an excellent Chris Brunt corner however, McAuley admitted that they left it far too late to mount a serious comeback.

“They are a quality team but we should have been better today,” said the evergreen defender, “We wanted to frustrate for as long as we could and come out and have a go, but it was too late in the game.

“We expected a difficult game and that is what we got. We gave them the two goals, they were preventable and we are disappointed with that.”

Also on the scoresheet over the weekend was Jamie Ward who bagged his second Burton Albion goal in the 2-0 victory over Birmingham City last Friday evening.

After the game Burton boss Nigel Clough was full of praise for the 31-year-old winger who is on a season-long loan from fellow Championship outfit Nottingham Forest.

“Jamie Ward has made one and scored one, “said Burton boss Nigel Clough, “That is what we brought him in for - that little bit of quality.”

Meanwhile, Northern Ireland under-21 striker Louis Rooney, who is on a month’s loan at Conference South side Truro City, scored his first goal for the club in their 2-2 home draw with Eastbourne Borough on Saturday.

The only other Northern Ireland player to find the net was former Linfield forward Daryl Fordyce who scored the only goal of the game as FC Edmonton defeated Jacksonville Armada in the North American Soccer League.

In Scotland Niall McGinn will face his former club Celtic in next month’s Scottish League Cup Final after Aberdeen overcame Greenock Morton, who had under-21 international Jamie McDonagh in their line-up, 2-0 in the semi-final at Hampden Park.

Finally, Sheffield United striker Caolan Lavery celebrated his 24th birthday on Saturday however he is still waiting for his first start for the Blades two months after signing for the League One side.

Canadian-born Lavery, who is slowly coming back to full fitness after some niggling injuries, made only his fourth appearance as a substitute for United in the 3-3 draw at Bradford City at the weekend.

“It’s a little bit of a unique one of the amount of football that he hasn’t played,” explained United manager Chris Wilder, “We have to make sure we look after him.

“We have to trust our medical staff and respect their opinions on what is right for Caolan.”