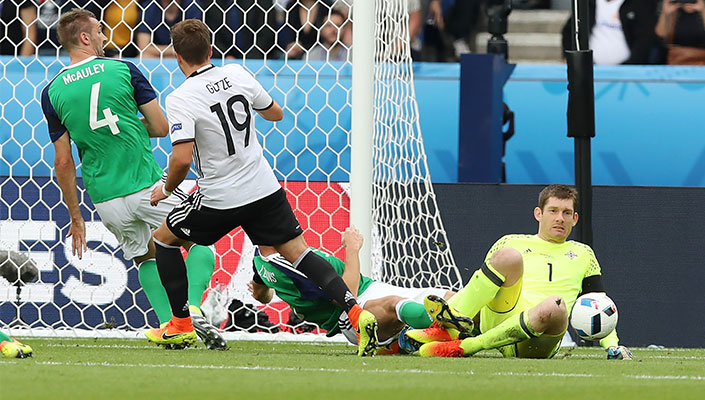 Ahead of Northern Ireland’s crunch Group C match against World Champions Germany, goalkeeper Michael McGovern looks back on his heroic performance the last time the teams met in June.

His performance in the Northern Ireland goal made headlines across Europe as he kept the likes of Ozil, Muller and Gotze at bay to keep the Round of 16 dream alive for Michael O’Neill’s men.

"It was a big one for me. People still talk about it I suppose. I was home in Enniskillen and people are still talking about it. Mum and Dad say that it’s mentioned often to them.

"It’s nice to have that game that people know you by and things like that, and it’s never happened to me before, but hopefully there will be other memories now before I finish my career and hopefully with Northern Ireland we can create new memories and qualify for the World Cup because that’s our aim now."

Looking ahead to Tuesday’s match in Hanover, McGovern is looking for points rather than personal glory: "Hopefully I'll have a quieter game. It would be nice if we could get a result from the game.

"I think it’s good we played them, we know what we’re going to face and we know where we can improve because we could have defended better at times.

"We’ll have a game plan going into it which I am sure the manager will brief us on that closer to the time. It’s not unrealistic that we can get a result albeit that they’re a top team."