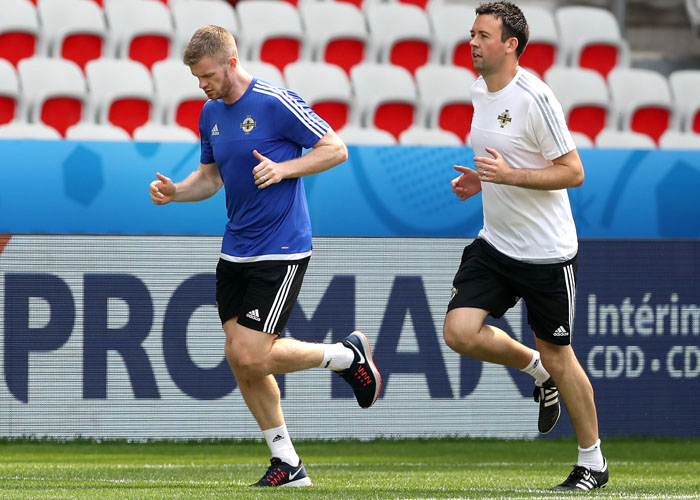 AFTER eight months on the sidelines through injury Chris Brunt made a welcome return to first team action at the weekend when he came on as a second-half substitute in the Baggies 1-1 draw at home to Spurs.

The 31-year-old midfielder, who suffered knee ligament damage at the end of February which cruelly ruled him out of Northern Ireland EURO 2016 adventure in the summer, admitted he was slightly nervous when he knew he was coming off the bench to play the final 21 minutes at the Hawthorns on Saturday.

“When the gaffer told me to get sorted and get ready to go on I was a little bit nervous,” declared Brunt, “It was great to get on though I wasn’t too sure what it would be like.

“There were 21 players in the squad and I wasn’t sure if I’d make the bench or not. I felt good and I was pleased.

“It’s a step in the right direction.”

Meanwhile, striker Josh Magennis clocked up his third goal of the season as he helped Charlton Athletic to a 3-0 success over Coventry for their first League One victory since 20th August.

The 25-year-old, who started both the recent Internationals against San Marino and Germany, also weighed in with an assist for the Addicks second goal to earn the praise of his manager Russell Slade.

“It was a really gritty performance from Josh,” said Slade, “He is a handful, for his country and his club.

“His work ethic is excellent and you have always got a chance when you have got someone that works to the limits that he does.

In League Two Northern Ireland under-21 midfielder Ben Kennedy sealed a 2-0 away win for Stevenage with a stunning 30-yard-strike at Morecambe.

Stevenage boss Darren Sarll explained that Kennedy’s goal was far from a one–off either.

“Ben actually did that twice on Thursday in training,” admitted Sarll, who also praised Dale Gorman for his assist for Stevenage’s first goal, “The exact same goal from the exact same position. So that was certainly one that was coming.”

Other Northern Ireland players to get their name on the scoresheet over the course of the weekend were Niall McGinn who took his tally to five for the season after he found the net in Aberdeen’s 4-0 home win over Ross County.

Defender Adam Thompson scored the only goal of the game in Southend United home win over Chesterfield in League Two while in the Championship in Scotland Jamie McDonagh scored his first for Morton who cruised to a 5-0 away win at Queen of South.

In Sweden, Richhill-born Daryl Smylie was on target for Jongkopings Sodra IF who drew 1-1 at home to Hacken, while in the North American Soccer League former Linfield defender Albert Watson scored a consolation goal for FC Edmonton who lost 3-1 at Minnesota United.

There were also assists for Southampton’s Steven Davis against Burnley yesterday, Rochdale’s Matthew Lund and Ben Reeves of MK Dons.