Norwood - We are expecting to be hard to play against 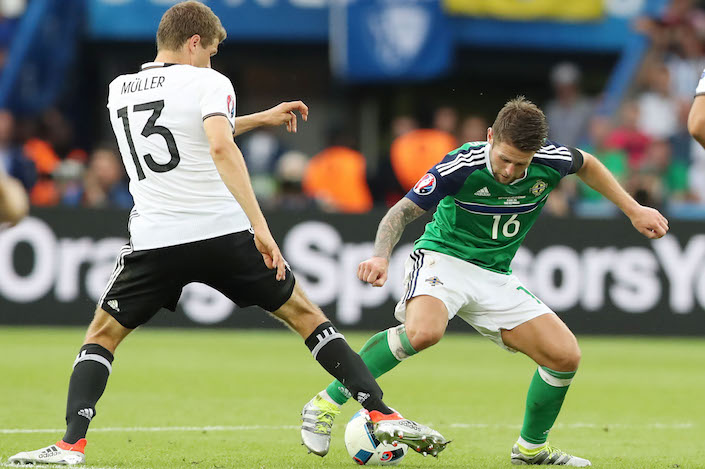 Northern Ireland face arguably their toughest game of the World Cup qualifiers when they face Germany in Hannover on Tuesday evening, however midfielder Oliver Norwood admits he is relishing the prospect of facing the reigning World Champions again.

“I am under no illusions about how difficult the game will be on Tuesday, but I’m certainly looking forward to it,” said Norwood, who won his 40th cap against San Marino on Saturday.

“In the space of four days we come away from what is perceived to be our easiest game in the group, at home to San Marino, to what is without question our toughest, away to Germany.

“We obviously played them not long ago in Paris and everybody saw the quality they had that day -  Michael McGovern made some fantastic saves to keep the score at 1-0 but they are the best team in the world and it will be a good experience to go out and play the reigning World Champions in their own backyard.

“They have top players so we are not coming here expecting to dominate the ball,” added the Brighton & Hove Albion midfielder, “however, what we are expecting is to be hard to play against, as we always are, but we will stick together and you never know in football it’s a one off game and anything can happen.”

The 25 year-old believes the experience the Northern Ireland team gained during the summer from playing at EURO 2016 will be of huge benefit to them as they seek to qualify for the Finals of the World Cup for the first time in over 30 years.

“We believe we can clinch second place in the Group, obviously Germany are expected to win it, but there is a confidence among this group of players that we can reach the Play-Off’s.

“EURO 2016 brought the country together and there is a real buzz amongst the fans now - the team and the staff have created that buzz and we just want it to continue now and make more and more history.”