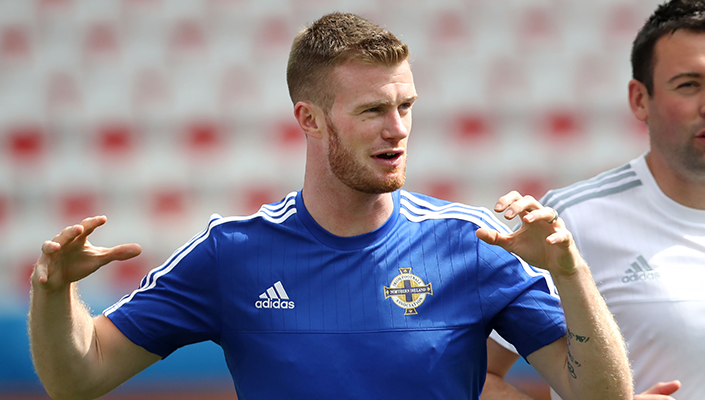 Premier League leaders Manchester City put a damper on Chris Brunt’s first start for West Brom this season by winning 4-0 at the Hawthorns at the weekend.

The 31-year-old midfielder, who was making his 250th league start for the Baggies, admitted that Pep Guardiola’s side were the better team on the day and deserved to leave the Midlands with all three points.

“In the first half they were much better than us and scored two good goals,” said Brunt, who won the last of his 54 caps against Finland a year ago, “we were desperate for half-time in the end. We couldn’t get any pressure on them at all. We didn’t create anything.

“But I think in the second half we came out swinging and there were at least a few positives for us to take.”

In League One, Rochdale midfielder Matthew Lund grabbed his third goal of the season in the 1-0 victory over Stephen Robinson’s Oldham Athletic in front of Northern Ireland manager Michael O’Neill.

“It was a neat little finish from Matty and prior to that he had a shot blocked,” said Dale boss Keith Hill. “It was a brilliant bit of skill and it was just rewards for him continuing to get into the box.”

In the National Conference former Northern Ireland under-21 defender Joe Jones made it two in two games for Woking though it was to be a merely a consolation goal as Boreham Wood eventually ran out 2-1 winners.

Eighteen-year-old Ollie Basset, who is on-loan at Dorchester Town from Yeovil Town, was the other player to find the net as he hit his first goal for the Evo-Stik league side in their 3-1 home success over Barnstaple in the FA Trophy.

Elsewhere, Hartlepool United look set to lodge an appeal with the Football Association after Dungannon-born Liam Donnelly received a red-card after conceding a penalty in the 3-2 defeat at Barnet in League Two.

“We can appeal,” confirmed Pools boss Craig Hignett, “It was a genuine attempt to get the ball, I thought it wasn’t a penalty the lad goes down easily and he’s 6ft 4 and Liam is 5ft 11.

“There’s a new rule now where you don’t have the double jeopardy when you give away a penalty but the referee is trying to say that Liam didn’t make an attempt to win the ball.”

Also dismissed over the weekend was on-loan striker Jamie Reid who received his marching orders after 77 minutes of Torquay United’s 2-1 success over Southport in the National Conference.

Finally, under-21 international midfielder Eoghan McCawl from Annacloy made his debut for Scottish League Two leaders Forfar Athletic on Saturday after joining the club on a two-month loan from St.Johnstone.