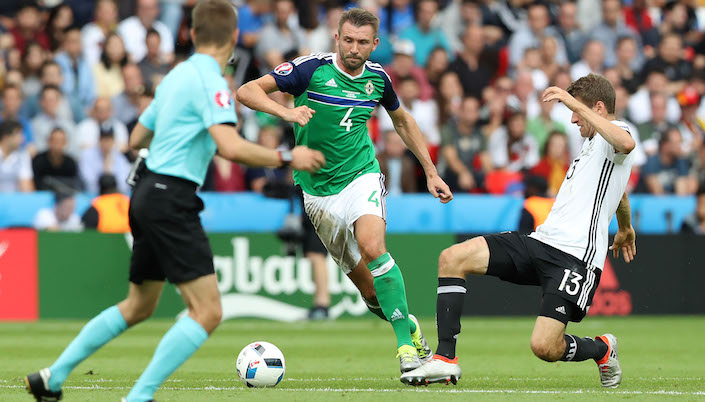 As back-to-back games go there are few more extreme polar opposites than facing San Marino and then Germany in the space of a few days.

After Saturday night's victory over the Sammarinese visitors, a game that officially opened the newly revamped National Football Stadium at Windsor Park, Michael O'Neill's players are off to Hanover to take on the four-time World Champions on Tuesday night (kick-off 7:45pm).

It would be stating the obvious somewhat to say that this will be an altogether different proposition. From turning out against a team of unknown part-timers, Northern Ireland will be locking horns with a side littered with household names and laden with silverware.

But it'll also be a Germany side that will hold few surprises following that memorable Euro 2016 meeting during the summer when a Mario Gómez goal midway through the first half gave Joachim Löw's side the edge in the Parc des Princes.

Germany go into the game with a maximum return from their two outings thus far, both 3-0 victories over Norway and the Czech Republic.

Perhaps they have a point to prove following the disappointing end - for them - to their Euro's challenge. With such a talented squad it's difficult to single any one player out for special attention.

Northern Ireland will need to be supremely disciplined for the entire 90 minutes and at the top of their game in all areas of the pitch.

However, Bayern Munich's Thomas Müller has already bagged four goals this campaign and will clearly be a particular concern given that sort of form.

He's been joined on the scoresheet by Joshua Kimmich (v. Norway) and Toni Kroos (v. Czech Republic), neither of whom are recognised goalscorers, another indicator of strength within the squad.

One new name beginning to break through is Bayer Leverkusen's Julian Brandt. The 20-year-old winger was named in the preliminary 27-man squad for the Euro's but didn't make the cut.

He has, however, come on as a second half substitute in both World Cup qualifiers so is clearly seen as one for the future.

Might he be given more of a role on Tuesday night? Historically, Germany have produced some of the biggest names in world football.

Players like Franz Beckenbauer, Karl-Heinz Rummenigge and Gerd Müller are the stuff of legends.

Müller, for example, was the long-time record scorer in the World Cup finals before being losing that crown to Ronaldo in 2006.

Lothar Matthäus is the most capped German player of all time, his 150 caps coming in a 20-year period from 1980 to 2000 during which time he collected World and European titles plus numerous individual awards.

Just behind him is Miroslav Klose, Germany's leading scorer with 71 goals from 137 games before his retirement from international football a couple of years ago.

Northern Ireland have a very rich history with Germany and, before that, West Germany. Indeed, the relationship stretches back to the 1958 World Cup finals when a Peter McParland double saw Northern Ireland earn a 2-2 draw in Malmo.

Then fast forward to the 1984 European Championship qualifiers when a goal from Ian Stewart on a famous November night in Belfast saw Billy Bingham's side defeat the then newly crowned World Champions.

But that was no fluke because almost a year later to the day Norman Whiteside scored the only goal as Bingham's braves repeated the feat in Hamburg.

Indeed, that was West Germany's first qualifying reversal at home, making it an even more remarkable achievement.

Or what about that night in August 1997 when Michael Hughes gave Northern Ireland the lead at Windsor Park on the hour only for Oliver Bierhoff to come off the bench and grab himself a hat-trick in a world record six minutes.

Looking forward to Tuesday's game, O'Neill knows he will have to adopt a very different approach from that used against San Marino.

Will Aaron Hughes come off the bench to bring his vast experience into play? Has Kyle Lafferty worked his way back into the starting XI following the impact he made after coming on at the weekend?

Indeed, the boss has hinted at 'as many as five or six' changes but, as he says, the players will know exactly what awaits them in the HDI-Arena.

O’Neill said, "We played them recently in the Euros, that's a big thing in our favour. There will be no surprise element in terms of how tough this game is going to be."