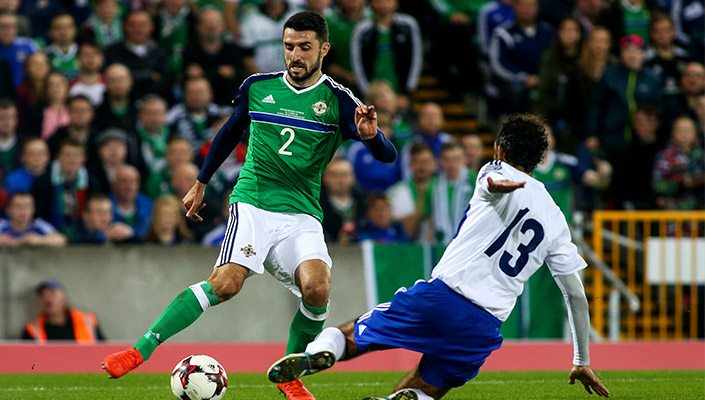 Fleetwood Town defender Conor McLaughlin scored the only of the game to give his side all three points in their League One clash at Chesterfield last night.

It was the 25-year-old’s first league goal for the Lancashire outfit this season and only his fifth for the club since joining them from Preston North End back in the summer of 2012.

Also on the scoresheet last night was Ben Reeves who made it three in his last six appearances for MK Dons to give them a 3-1 lead at home to Bristol Rovers, unfortunately, two late goals by the visitor’s means they have still to win at home this term.

Elsewhere in League One, Daniel Lafferty, who is on a season-long loan at Sheffield United from Burnley, headed home his first goal for the Blades who won 3-0 at Shrewsbury Town to move them up to fourth in the table.

In the Championship striker Conor Washington, who started in QPR’s 1-0 win at Loftus Road against Bristol City, was unlucky not to grab a third goal of the season after his effort in the 55th minute struck the crossbar.

Meanwhile, Corry Evans provided an assist for Blackburn Rovers, his third in eight games, as they edged out Nottingham Forest 2-1 at home, while striker Will Grigg was back in the starting line-up for Wigan Athletic who grabbed an injury time goal to earn a point at Leeds United.