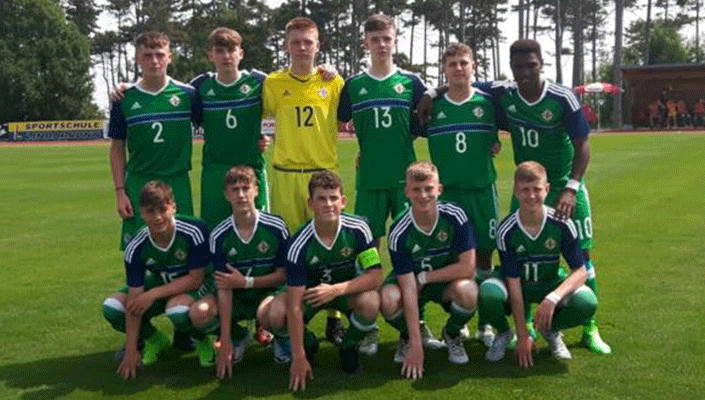 Northern Ireland’s Under-15 Schoolboys side drew their second and final tour game against Austria’s U15s.

After registering a scoreless draw in the first of their two international friendlies in Austria, the U15s drew 1-1 with their hosts in game two.

Austria started strongly in the match at the Lindabrunn Stadium at Enzesfeld-Lindabrunn. Denizcan Cosgun and Matthias Brunnoder combined well to carve open the Northern Ireland defence but Brunnoder's shot drifted past the post.

However, on 11 minutes the visitors missed a great chance to open the scoring. Barry Baggley found Alberto Almanzar with a pinpoint cross but the unmarked striker headed straight at the Austrian keeper from six yards out. Soon afterwards Almanzar outpaced the home defence but dragged his shot wide of the upright.

The Austrians were quickly back on the front foot and Ruadhan McKenna produced a great save to keep out a 25-yard piledriver from Dino Rusovic.

But the Northern Ireland keeper was given no chance on the stroke of half-time when Edin Mujkanovic crossed from the right and Rusovic volleyed the ball into the net from close range.

On the restart Northern Ireland upped the ante and Peter McKiernan thought that he had snatched the equaliser, bundling the ball over the line when Austrian keeper Nikolas Polster dropped a free-kick by Gerard Storey. However, the referee disallowed the goal for a foul on the keeper.

On 67 minutes the visitors deservedly drew level when John McGivern met a cross from Ben Wylie to net with a powerful header.

In the closing stages Northern Ireland pressed strongly in search of the winner with George Tipton and Aidan Steele both going close.

The U15 Schoolboys will next be in action against Estonia at Comber on 14 August and at Knockbreda two days later.