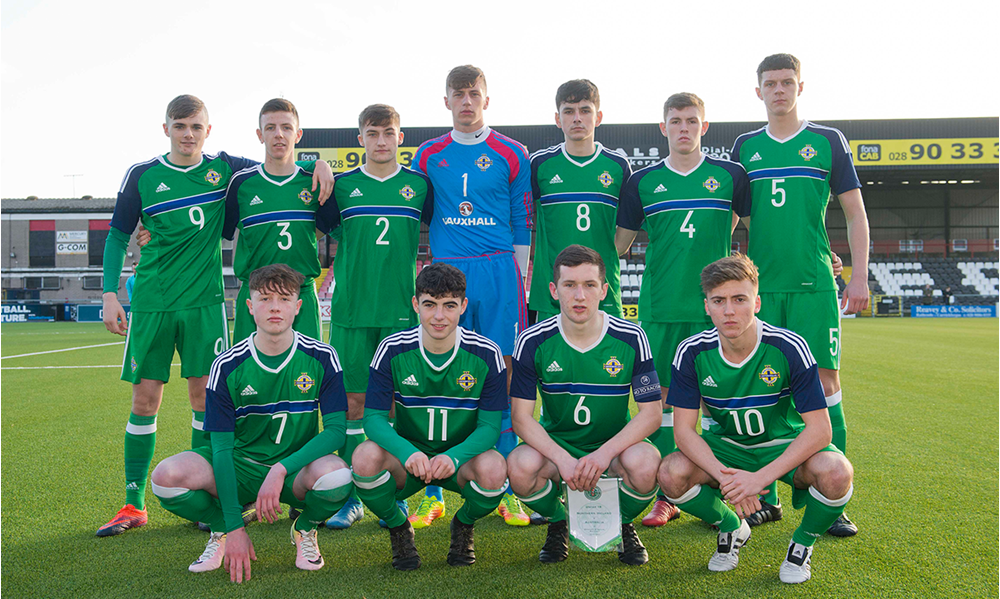 The best Northern Ireland teenage talent will tackle some of Manchester United’s brightest future stars in a curtain-raiser to this summer’s SuperCupNI in Coleraine.

Manchester United’s Under-18s coach Kieran McKenna has jumped at the opportunity to test his young hopefuls against a Northern Ireland U18 side in what will be a special homecoming for the Fermanagh man.

Kieran captained Northern Ireland in the Elite competition back in 2005 and played for his county in the Junior tournament four years earlier.

The challenge game at Coleraine Showgrounds on Saturday 22 July is expected to sell out quickly as United fans get the chance to celebrate the club’s return to the international youth tournament after a two-year absence.

McKenna, who played for Enniskillen Town and Ballinamallard United before signing for Tottenham Hotspur, has happy memories of the competition and is delighted to be getting involved all over again with a squad of young stars he has been working with since he joined United’s coaching staff from Spurs last September.

The young coach has forged an excellent reputation for developing young talent after coming through the ranks at Spurs. The 31-year-old was Tottenham’s U18 coach before making the switch to United.

He explained: "I was involved with Tottenham from the age of 14. I travelled across from Northern Ireland to train with the youth team. I was full time at 16 and had seven fantastic years as a player.”

Unfortunately the last two years were heavily disrupted by injury and he was forced to end his playing career at 23. He has been undertaking coaching roles since then.

He explained: "I learned a lot and Tottenham have had a lot of success with their academy but to join Manchester United, well, there is no bigger move you can make. It has a fantastic academy and it was a dream come true really. I was a massive United fan growing up. My dad took me to my first game in 1994 to see them lift the Premier League trophy."

Kieran places huge importance on young players testing themselves against high level international opposition and knows the challenges and benefits playing at a tournament such as SuperCupNI will bring United’s young players in July’s Junior tournament in Northern Ireland.

“There is an importance placed on developing the individual and generating outstanding individuals who can play in the first team as a main priority,” he revealed.

In recent years fans at SuperCupNI saw future Man U stars such as Marcus Rashford and Jesse Lingard in action at the tournament. Striker Rashford, now an established England international, was part of the United squad that won the Premier title in 2014 along with Cameron Borthwick-Jackson, who scored the only goal in the final against French side Vendee.

Kieran added: “If our boys get in the first team they will play against South Americans and people from all over Europe, Asia and the rest of the world so they need to get used to playing against those kinds of teams collectively and also individual players. Their style of play is different to British players so the boys who represent us at international tournaments gain some invaluable experience.”

The Enniskillen man has special memories of competing in the Milk Cup as it was called then. He was 13 when he represented County Fermanagh in the Junior Section and then in the Under-20 section for Northern Ireland.

He said: “We beat Brazil in the semi-finals but were beaten by USA in the final. It’s a good tournament and I really enjoyed it. It’s great for the fans as any time United play in Northern Ireland, at any level, there is immense interest.”

Former Milk Cup winner Nicky Butt now heads up the Manchester United Academy. He was part of the famous 1991 team that lifted the Premier crown in Coleraine with some of the club’s future big names such as David Beckham, Gary Neville and Paul Scholes.

The Northern Ireland squad to face Manchester United has still to be finalised but coach Stephen Frail, who is manager of Northern Ireland’s U19s and U17s, says it represents a massive opportunity for his players.

He pointed out: “This is such a prestigious tournament and I’m hoping to use as many home-based players as possible.

“We are talking about playing the cream of youth football and it will be a terrific occasion for the players and the fans of a great tournament.”

Stephen renewed his acquaintance with the competition last year as part of the Irish FA’s Club NI coaching team.

He said: “I was able to take in a lot of games and the standard was excellent.

“I was with Hearts a few years ago when they played in it and, although we didn’t do so well, the whole experience was fantastic for the boys. It is such a well organised event.”

SuperCupNI chairman Victor Leonard insisted Manchester United’s enthusiasm to be involved in next month’s game is not surprising.

He said: “We have maintained a strong, friendly relationship with Old Trafford over many years and particularly in the past two years when they were not able to compete. We are thrilled to not only have them competing at Junior level but also participating in this new venture for us with the Under-18 game.

“We are constantly exploring different ideas to enhance the event and will be taking several innovative ideas forward as we look to develop it in the years ahead.”

This year the key role SuperCupNI has played in assisting the development of future players in top flight football has been recognised by the Premier League in England, which is providing financial assistance.

Following the Manchester United-Northern Ireland game at Coleraine Showgrounds on 22 July, the tournament’s traditional welcome parade featuring competing teams will conclude at the ground with the opening ceremony.

Finals night this year is being staged on Friday 28 July at Ballymena Showgrounds.