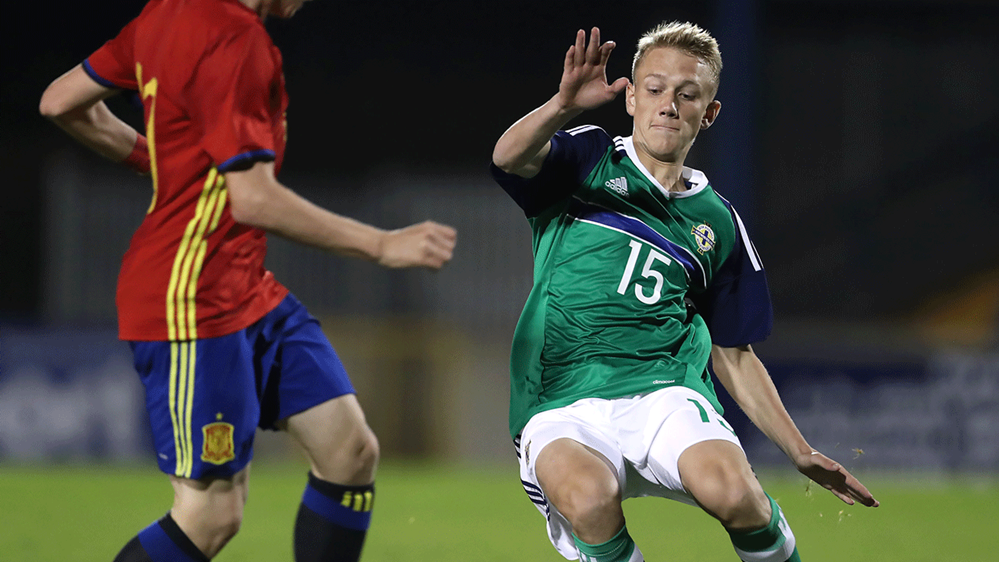 The 16-year-old has agreed a three-year deal with the Red Devils and will travel to Old Trafford this weekend to sign on the dotted line.

The Glengormley teenager’s contract includes an initial one-year scholarship and then a two-year pro deal.

He will begin his career at Old Trafford playing in United’s Under-18s but the ultimate aim is to play for the first team.

He duly impressed in the trials, including a couple of friendlies, and subsequently signed a pre-contract agreement with Man U back in January. United legends Nicky Butt, who is head of United’s academy, and Ryan Giggs were in attendance.

Jim Magilton, the Irish FA’s Elite Performance Director, said today: “We are all delighted that Ethan has signed for Manchester United. He has been a part of our Elite Development Programme from the beginning, and we have been able to watch with enormous pride the huge progress he has made during that journey over the past four years.

“He was a pleasure to work with due to his character, attitude and enthusiasm for the game. He is an outstanding talent and I'm sure he will continue to develop and improve at such a fantastic club.

“We wish him all the very best and look forward to seeing him playing for Northern Ireland in the years to come.”

The defensive midfielder started his football career with Carnmoney Colts before playing for underage teams at Ballyclare Comrades, Glentoran and Crusaders. He also had two spells with Linfield before securing his move to the Red Devils.

The Glengormley teen, who is actually an Arsenal fan, said he is “buzzing” at the prospect of travelling over to Manchester this weekend to live there and sign his full deal.

The former Glengormley High School pupil told Belfast Live today: “When I started out in football my dream was to one day go to England and make a career out of it… but to be honest I never would have dreamt of signing for Manchester United. It is amazing.”

In Manchester Ethan will initially work under Fermanagh man Kieran McKenna. The former Tottenham Hotspur player and coach, who played for Northern Ireland at various underage levels, is the Manchester United Under-18s coach these days.