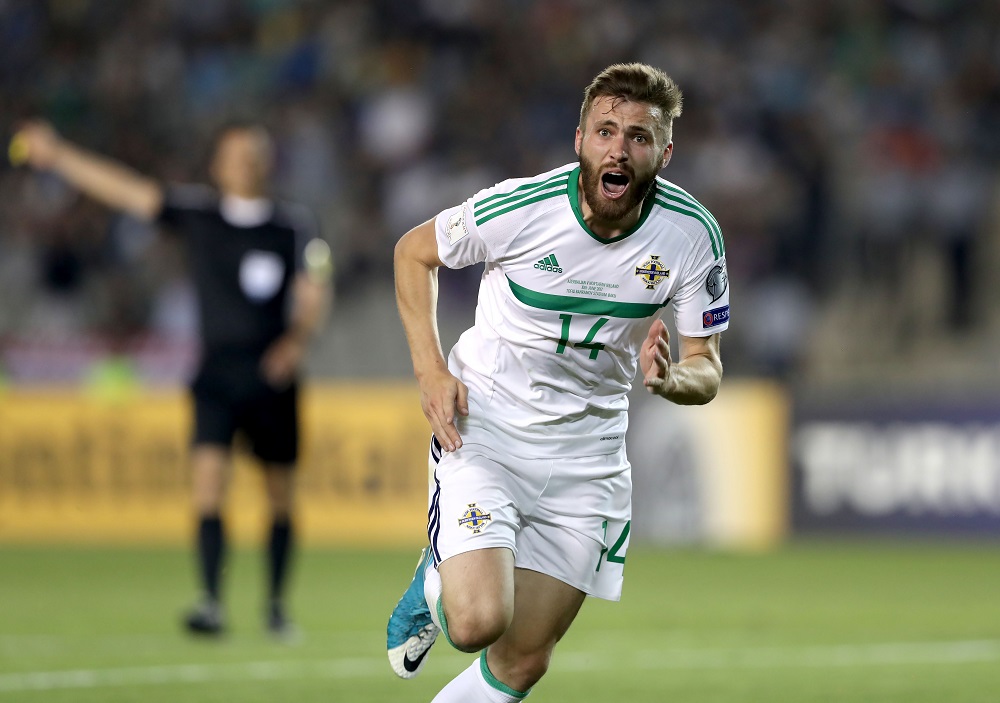 The Leeds United man grabbed his first international goal on 92 minutes with a right-foot effort into the bottom corner beyond 'keeper Kamran Ağayev to spark ecstatic celebrations amongst the 300-strong travelling support.

Northern Ireland started brightly, forcing a number of openings during the early exchanges.

On four minutes Chris Brunt sent the ball over from the left which Jonny Evans met with a header only to send the ball over the bar.

Then, not long after that, another Brunt delivery reached Liam Boyce at the back post although the Ross County man could only nod wide of the target.

It took Azerbaijan just over a quarter-of-an-hour to create their first effort of note when Dimitrij Nazarov offered up a right-foot drive from outside the box but the shot never looked likely to trouble Michael McGovern as it drifted high and wide.

Perhaps the best chance of the game to date came on 23 minutes after Ramil Şeydayev latched onto a Badavi Hüseynov ball over the top only to fire over the bar with just McGovern to beat.

Northern Ireland made a change moments later, with Niall McGinn coming on for the injured Gareth McAuley with Brunt dropping into left-back as the side reverted to a flat back four.

The game developed into a midfield battle with neither side possessing the necessary bite to create anything notable in front of goal.

There was a brief flurry of activity just before the break when Brunt gathered the loose ball to send in a dangerous cross into the penalty area for the in-rushing Boyce to agonisingly just fail to reach with his outstretched left leg.

Then, at the other end, Brunt was called into action again as he needed to be alert to deal with a Qara Qarayev cross into the box.

Needing a positive result to keep their hopes alive, Azerbaijan started with more purpose after the break but couldn't turn their pressure into anything tangible.

Indeed, Northern Ireland looked more likely to find a way through and offered up a decent opportunity just short of the hour when Josh Magennis was unable to direct a header towards goal from a Brunt free-kick to the back post.

Magennis threatened again a few minutes later but Hüseynov was alert to clear the danger.

Afran Ismaliyov might have found a way through on 64 minutes after connecting with Richard Almeyda's cross-field pass to test McGovern with a low right-foot strike but the Northern Ireland 'keeper did well to make a solid save.

Then, with 20 minutes to go, Ismaliyov was involved again after creating an opportunity for Seydayev. His effort was blocked but Almeyda picked up the loose ball only to blast over the bar.

The Azeri's continued to press as the clock wore down. On 83 minutes Almeyda ran into the box to meet an Ismayilov ball but lost his concentration at the crucial moment to fire over.

But, then, as the game looked to be winding up Jonny Evans laid off an exquisite square ball for Dallas to grab that all important winner. 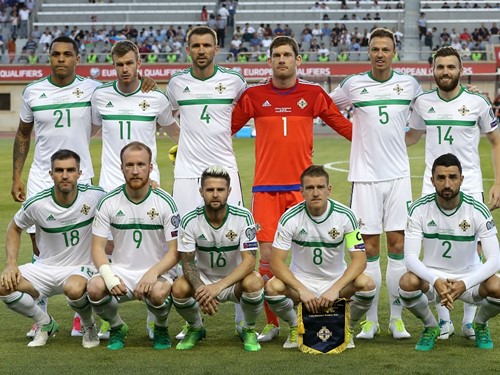 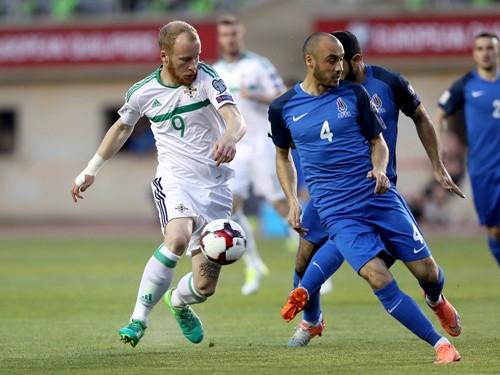 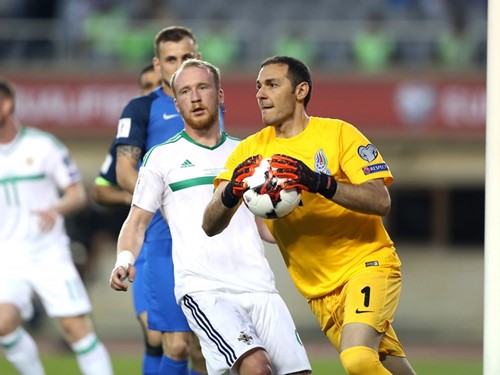 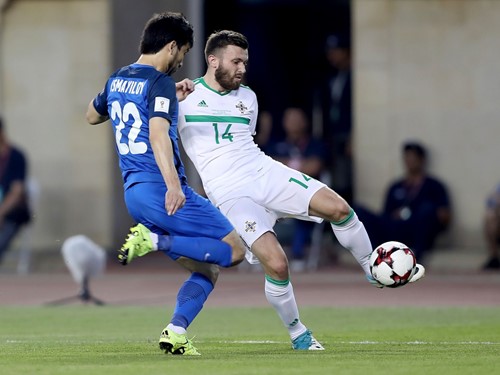 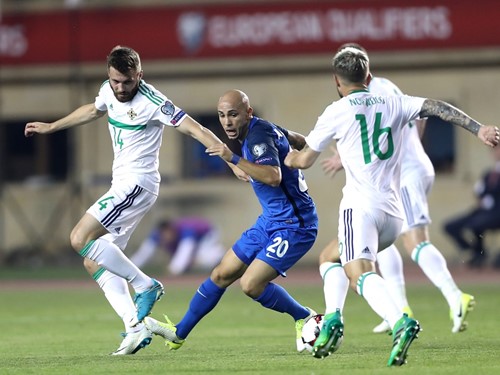 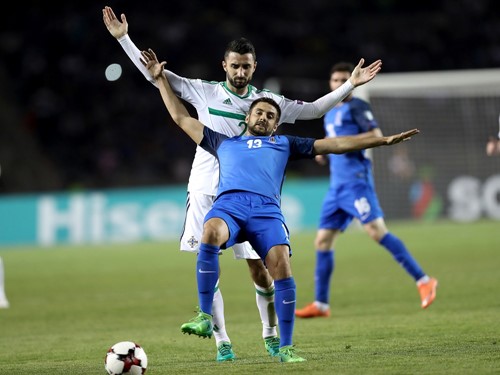 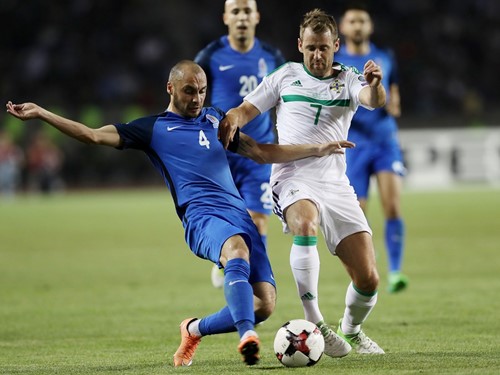 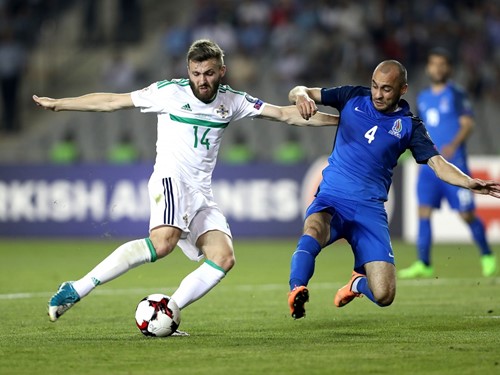 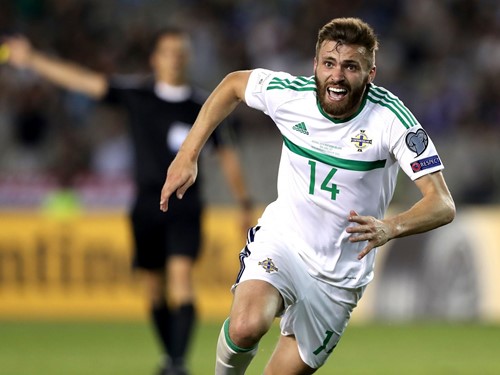